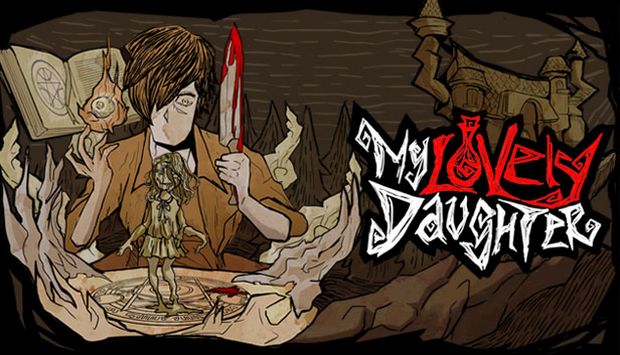 My Lovely Daughter is an indie psychological game that deals with dark and gloomy themes such as depression, betrayal and anxiety. As soon as you start the game a disclaimer made by the developers show that the things you see within the game are based off real life experiences from the development team. Gameplay is simulator style, similar to visual novels in that there is a lot of dialogues but focuses more on interactive events.

The story’s beginning is very straightforward and immediately puts you into the game. You wake up with amnesia, you don’t know what happened before and you see your daughter and her soul separated. You then discover a spell book filled with instructions about how to save your daughter’s soul contained in the soul chamber and summon homunculi (plural term for homunculus.)

Now on to the actual game, it’s a point-and-click grind game. The gameplay is very grindy, in that it takes some time to understand what works and how to improve certain aspects of the game. In the later parts, it becomes a bit more stable as you now have a steady source of income and a near-infinite supply of materials. This is the part that gets tedious because it’s basically the end game, it becomes a moment where you’re either doing a 100% clear run or want to get to the ending already.

The characters within the game are well written, specifically the homunculi. Each homunculi represents an aspect of emotion needed to feed your daughter’s soul, the aspects are Fear, Sadness, Joy and Anger. These homunculi all have different combinations and interactions. As you play the game, each homunculi will send a letter to you which you can collect and read, doing so lets you understand more about them, what they like, what they don’t like, what they have learned and so on. I liked this the most because it gives you a sense of connection between the homunculi you raise, you start to understand more about their differences as you spend more time with them. Which makes parting with them all the more depressing. No waifus for you.

The art style is perfectly in theme with the atmosphere and nature of the gameplay, which is pretty dark and depressing. The characters are all jagged and sharp, which reminds me of the design of the witches in the anime Puella Magi Madoka Magica. Despite being an indie game the sound is well done, makes you really feel the weight of the choices you make as you progress through the game. Whenever I had to sacrifice a homunculi, I got chills when I heard actual crying when I was about to do it. Though it didn’t stop me, it still left a hole in my heart when I had to say goodbye to them. (I’m sorry Ataran and Titanium, I needed you for my daughter’s soul.) 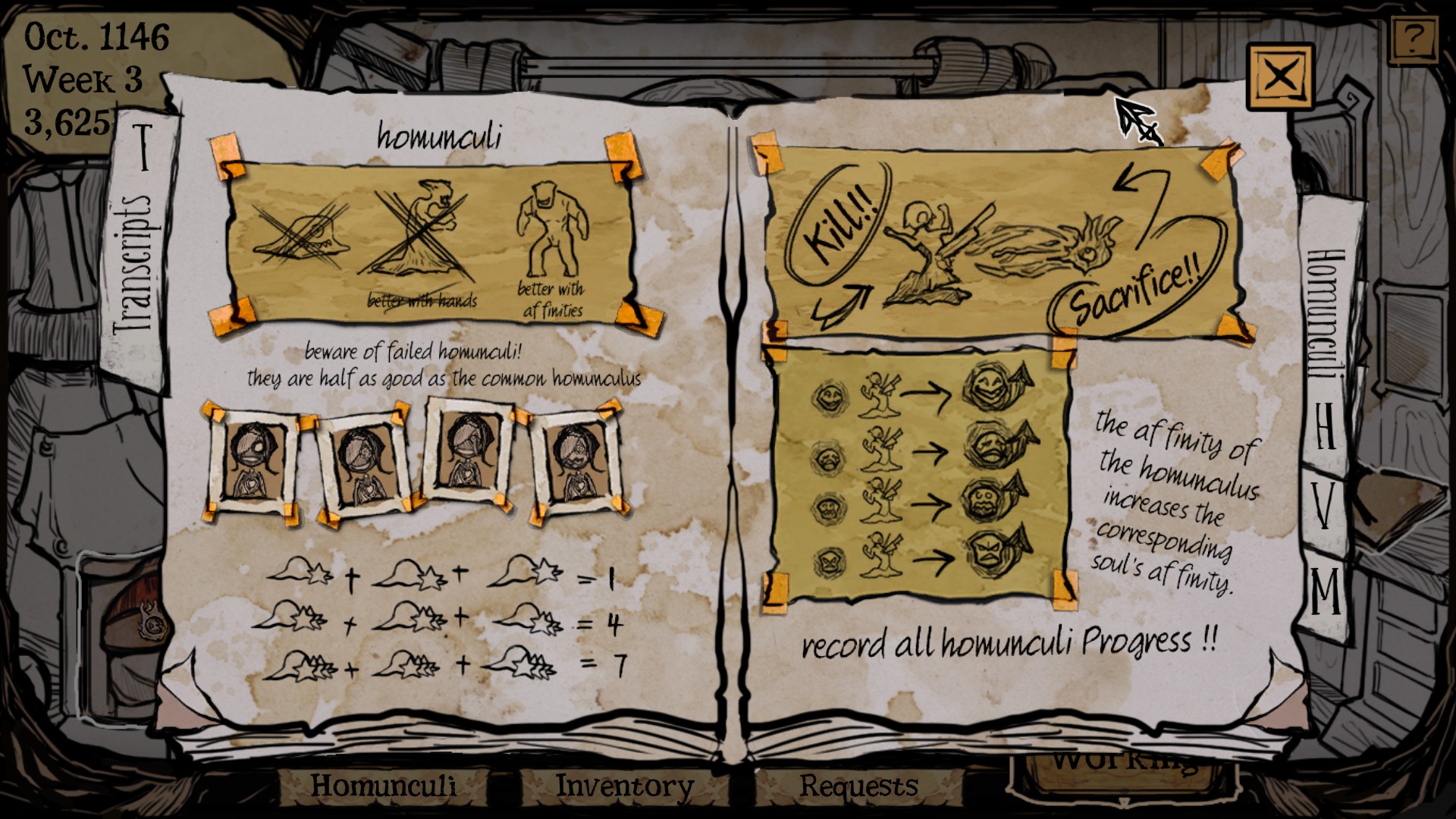 The ending however sparked the interest I had for this game, the first time I played it. I’m not going to spoil it but it is worth the time and effort to see that ending, completely blew me away. The game offers multiple endings with only one true ending, though some endings permanently delete your saved data so I suggest doing them if you want the 100% achievement.

Overall, the game is well made, story is well written, it is a bit jarring with how quickly it jumped me into the story with almost every convenient plot device used. The gameplay however is up to personal tastes. I’m very fond of the grinding element of games and this one got me hooked through it but, again, repetitive actions are tedious and often times you may end up stopping for a whole day and come back to spend more hours than you thought grinding away in it. Game is good but it may not be for everyone, it feels more like a grinding game rather than a visual. If you’re into story development and rewarding grinds, this game is for you.

My Lovely Daughter Review
Score Definition
You better have to choose if it’s worth spending your spare cash, because it might not be the game for you and it might be for others.
Pros
The creepy music and ambiance match each other well
Artwork reflects the premise of the game well. Reminds me of Tim Burton
The dialogue of the characters is very heartfelt.
Lovely Daughters to love.
Cons
Grind playstyle may put you off because of repetitive actions and tasks
You can't lose at a certain point in the game, so you're stuck with wanting to end the game.
Storytelling seems somewhat forced and linear
6
Justified