Gambling of the Future: Virtual Reality at Online Casinos 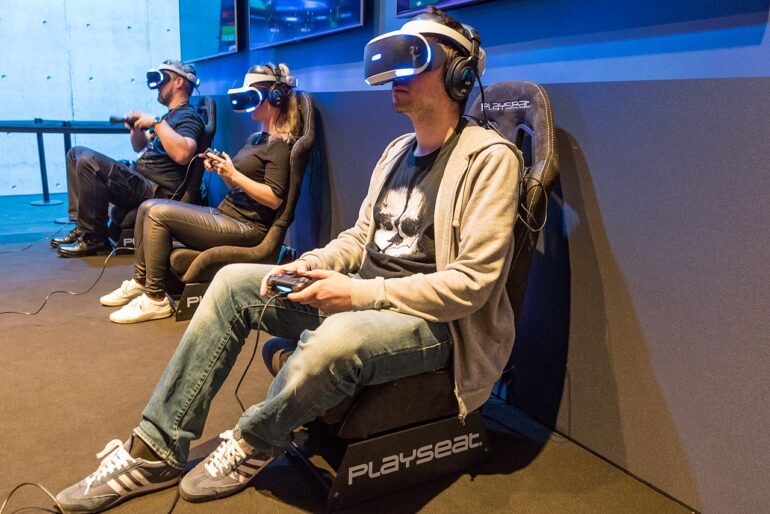 Virtual reality is considered to be the latest gambling trend which provokes ambiguous feelings of awe and mistrust. No matter how to go with it but it is clear that the idea of implementing the virtual reality into casino games will face lots of regulatory hurdles. We can expect their complete prohibition from several gambling jurisdictions when others of them can impose some limits that could hinder the development of the gambling industry and client outreach. Nevertheless, we cannot stop or avoid the forthcoming of virtual reality in casino games.

What Is the VR Casino?

As soon as the Oculus Rift outfit became commercially available in 2016, the SlotsMillion company created the first virtual reality casino. It was a casino lobby at a skyscraper in a futuristic style inspired by Blade Runner. At the casino, you can play numerous fantastic 3D games, interact with other gamblers, and feel vertiginous while leaning against the window and looking down.

To lay the foundation of a VR casino, SlotsMillion closely cooperated with the Malta Gaming Authority which is its regulator and implemented an innovative set of technologies for a new medium. Unlike most brick-and-mortar casinos around the world, in the VR casino, you can see clocks on the walls. And that was the point Malta insisted. Thus, gamblers cannot get lost in the slots. Moreover, SlotsMillion wanted to introduce a multi-player tournament games feature due to which a user’s balance of the money was visible. But the idea was banned by the regulator because the player’s winnings and losses should be private.

Gambling Industry: What to Expect?

The growing number of countries in the world tend to license and tax online casinos. No wonder that the gambling industry is exposed to more considerable regulatory controls that it was before. Nevertheless, an unlicensed offshore gambling market exists and neglects the rules of the government. From this perspective, as in real life, we can expect the advent of licensed casinos with virtual reality and their illegal analogs.

SlotsMillion innovation is impressive. But for the moment, it is deficient of market and client base. When it comes to the gambling market, the Oculus Rift goggles can cost up to of $350. Though very affordable, the headset will not function without a high-quality gaming PC which increases costs up to $1,500.

It means that the first customers of virtual reality casinos will apparently be not the traditional players but gamers of the 2000s generation. As mentioned SlotsMillion, most clients will experience the technology in browser 3D mode rather than the Oculus Rift.

The top-rated casinos of Nevada have long complained the millennials’ unwillingness to play traditional casino games. Nurtured on console games, they enjoy Halo 5 rather than gazing upon spinning reels. At the same time, the increasing interest to esports is not unnoticed by the gambling industry which tends to appeal more and more to a younger generation. According to new laws adopted in New Jersey and Nevada, they allow variable payouts on slots to pave the way for the presence of gaming machines incorporating a particular form of video gaming. Usually, gaming laws dictated that payout odds should be identic for all gamblers. Instead, variable payouts will permit better odds for clients who are able to get proficiency level at skill-based bonus rounds.

The borders between esports, video and casino games are already becoming vague. And the coming of virtual reality will enhance the necessity of future crossover. Social casinos are likely to have considerable success in virtual reality. According to Eilers Research, the gambling industry is now worth $3.4 billion but will increase up to $4.4 billion by 2017 due to implementing of various skilled-based elements.

Brick-and-mortar gaming houses can effectively use social casinos as a marketing tool. In the future, we can expect the increase of the VR recreations of Las Vegas casino resorts. It is the case of MGM Resorts which has already done it with MyVegas social casino where clients are allowed to explore MGM properties on the Vegas strip.

According to the estimates of Adam Krejcik, the Eilers Research analyst, social games will be the first to make a profit on the Oculus Rift. The clients of social casinos are undoubtedly not the same as traditional online casino users. They tend to think like gamers, but not gamblers. They dream about how to win in the game rather than enjoy the thrill of risk-taking.

Finally, the VR casinos of the future are likely to be a symbiosis of video games, classic casino games, skilled-based games, and social games targeted at the millennium generation.