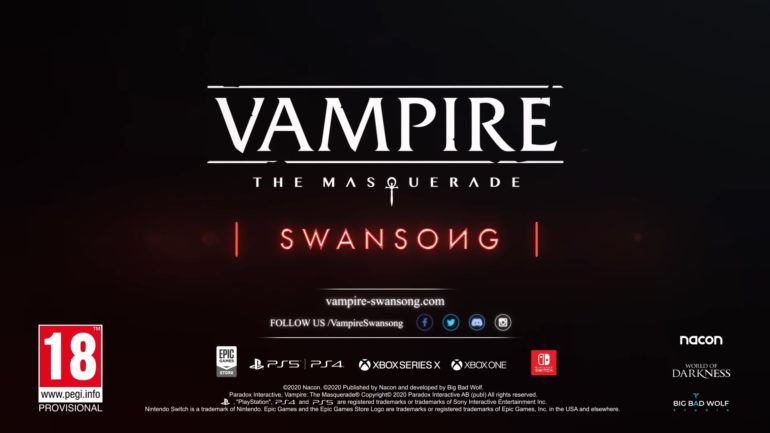 As you have noticed, video game releases are actively being released throughout the month of April. If none of these titles tempt you, don’t worry because others will be released in 2022, namely the much-anticipated game; Vampire: The Masquerade – Swansong. Fans of the World of Darkness universe will be delighted to learn that the narrative RPG developed by Big Bad Wolf, and published by Nacon, is soon available. The vampiric creatures are sharpening their fangs before entering the light on May 19, 2022. In the meantime, you can enjoy books by Stephanie Meyer, who revels in vampire storytelling. However, vampires do not only feature in books, as their presence can be found in different mediums. Varying from the best online video slots to great board games.

After The Council and its 18th century historical England, Big Bad Wolf is now looking at the World of Darkness lore, and more precisely at the paper role-playing game Vampire: The Masquerade. You will be able to follow the intersecting stories of three nocturnal beings evolving in contemporary Boston. The vampire community is in turmoil following a terrible incident that threatens to expose the existence of The Camarilla, an organized community of vampires led by Hazel Iversen aka the Swan… the new Princess of Boston.

As Galeb, Leysha, and Emem, you investigate to unravel the mystery surrounding the tragic events that threaten the vampire cult. The gameplay sequence that we were able to explore does not allow us to judge the setting of Vampire: The Masquerade – Swansong, as it is mainly focused on the gameplay. However, the writing is quite refined. The video game respects the lore of the paper role-playing game, the 5th edition of Vampire: The Masquerade to be precise, and draws inspiration from it to enrich its story.

Nevertheless, the generic art direction struggles to make an impression. The artists take a few risks and do the basics from a purely aesthetic point of view. Vampire: The Masquerade: Swansong is visually and technically efficient, but it fails to surprise.

As far as the game experience is concerned, Big Bad Wolf takes the formula tested and approved by The Council and transforms it to fit the prerogatives of the vampiric universe of World of Darkness. We are in the presence of a highly narrative adventure game on which a whole role-playing dimension is grafted. Vampire: The Masquerade: Swansong defines itself as a narrative RPG. The title published by Nacon is based on three fundamental pillars… the story, the notion of choice that follows, and the character sheets taken from traditional role-playing games.

The three protagonists, each belonging to different clans (i.e. Ventrue, Malkavian, and Toreador), conduct their investigations, converse with various characters, explore closed environments, and complete objectives according to a specific agenda. Swansong remains in many ways a “linear” adventure with multiple endings that evolves according to a set agenda and the decisions made by the players. Big Bad Wolf promises no less than fifteen different epilogues for the main characters, ten for the secondary ones, and six for the clans… all of which can be combined in different ways for a total that is difficult to quantify as it stands.

The role-playing dimension is intrinsically linked to the adventure. This translates into three character sheets, one for each protagonist, with its share of skills to unlock and stats to improve to facilitate progression. These choices have a direct impact on the investigation and the way to reach the given objectives. Whether it’s through diplomacy or a certain persuasive force during verbal confrontations, the approach taken depends on the choices made in the past and the way your heroes evolve with experience gain.

Skills and disciplines mastered by vampires can have repercussions on the story and thus change the destiny of the three vampires you play as.