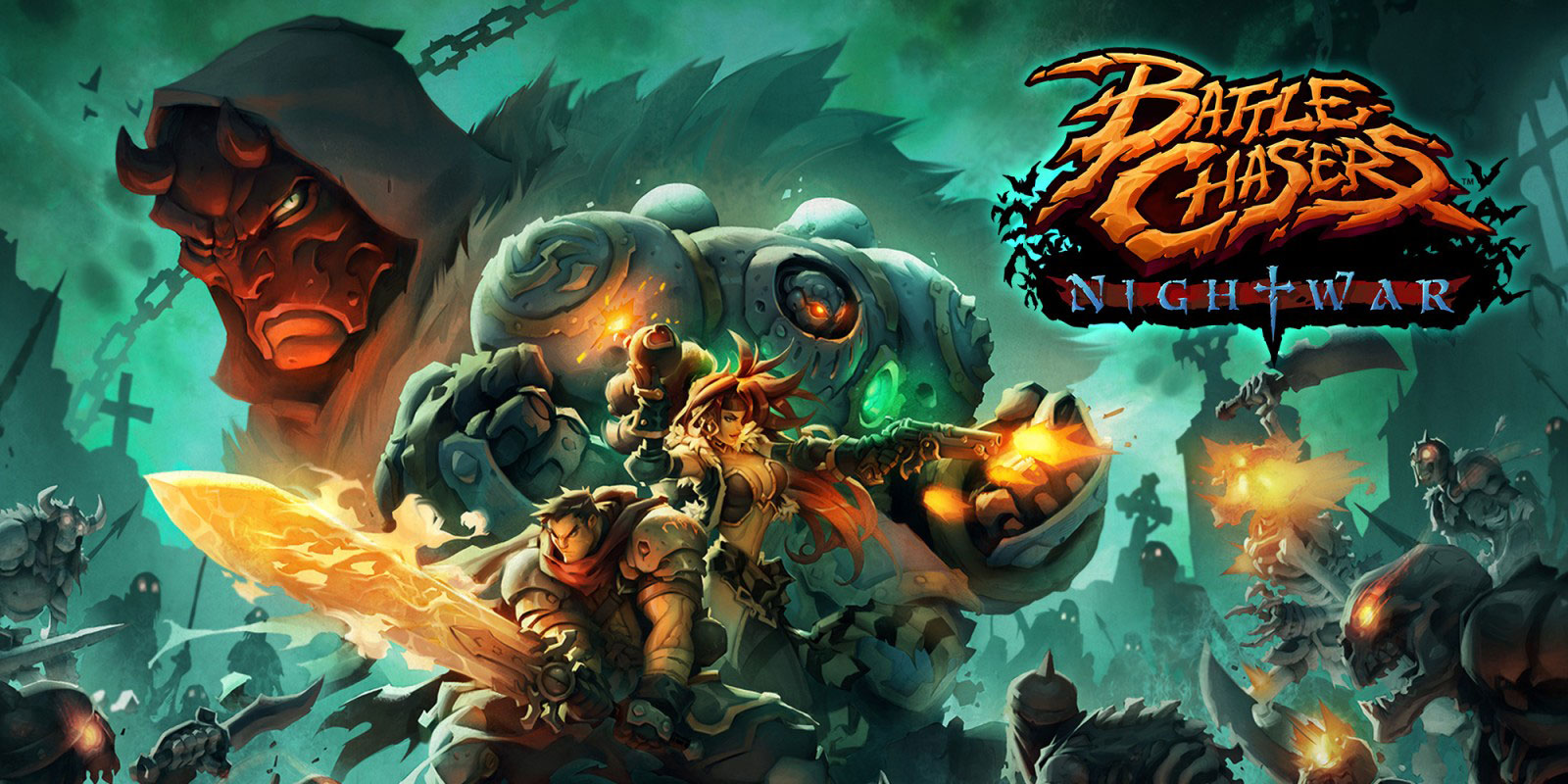 Although the Nintendo Switch doesn’t excel as much in the RPG department compared to its competition, we’re at least seeing the list of games expanding; Take Battle Chasers: NightWar, a turn-based RPG recently ported for the console.

Have you ever owned or at least read any kind of fantasy comic where the plot’s as generic as you can get, but the characters and backgrounds look amazing? That’s exactly what Battle Chasers is. The developers definitely placed a lot of effort into the comic book-based art style as just about everything looks and feel aesthetically pleasing. 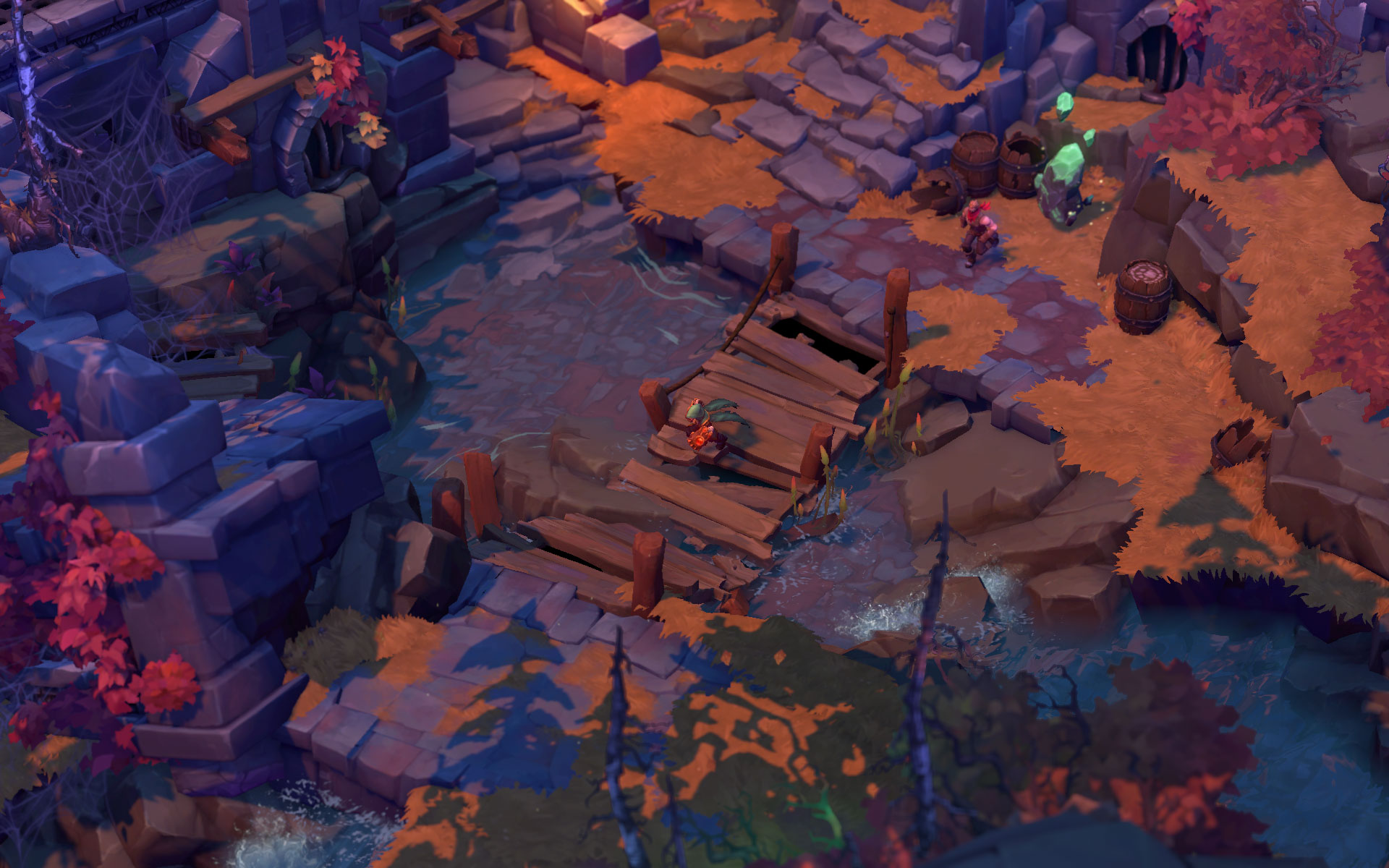 Before we go more into that, let’s talk about the plot.

A young girl named Gully is on a journey to find her father Aramus after losing him to the impenetrable wall of mist known as the Grey Line. Her father felt as if something was there that needed to be discovered, thus leading him to venture through the mist despite the dangers; and much like all other adventurers, fugitives, or fortune-seekers before him, he never returned. Now it’s up to Gully with her magical pair of gauntlets and her crew to seek out Aramus and hopefully find whatever he was searching beyond the mist.

Although the story is as basic as you can get for a fantasy RPG,  the characters and the dialogue more than make up for it.  The team of adventurers comprises of the caring and determined Gully, the hardened and protective sellsword Garrison, the intuitive war golem Calibretto, the notorious yet attractive fugitive Red Monika, and the wisecracking old aged wizard Knolan. All of them have a distinct personality and it shows whenever they converse with one another and with other characters. What’s sad is that while there is a sense of development among all of them, it still feels quite lacking compared to most modern RPG’s.

In regards to the dialogue, it’s actually the NPC’s which stand out in this department. There have been so many instances where I took the time to actually read whatever it is they have to say, and I was surprised to find myself chuckling from time to time. I’m not saying that the main characters don’t have any personality when it’s their turn to shine, but it really shows that the writers were more focused on entertaining players via NPC conversations.

Now when it comes to combat, it’s your typical turn-based game where both sides take turns in whacking each other. The basic RPG combat elements of normal attacks, skills, status effects, buffs and debuffs are all here, but it does try to take a new spin on some of them. For example, each character has a set of action attacks and ability attacks – with the latter requiring mana. If a player decides to go with action attacks, they gain overcharges; now these are what you can use to activate ability attacks instead of mana. This gives combat much more depth as you now have the choice to conserve mana for when you really need to use it. 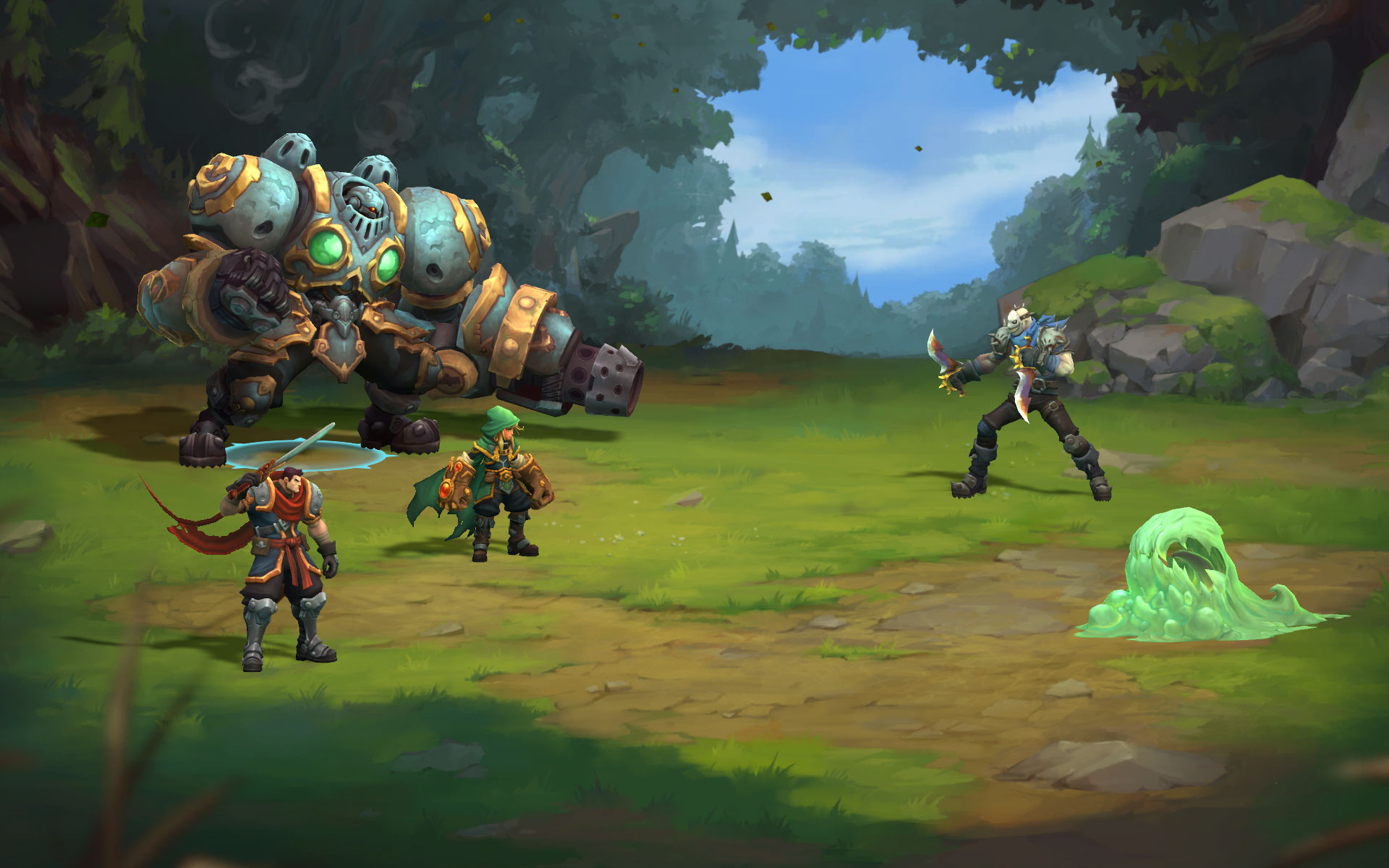 There are also burst attacks, a powerful move that each character can use when the burst meter is filled up. As you do just about anything during combat, you’ll see that there’s a specific meter that slowly fills up. Once it’s full, you will be able to launch burst attacks. Take note that not all of them will do damage as some of them can be used mainly for protection such as healing your party. Each burst attack differs by character and all of them have different levels, with each having their own unique effects. Again, this gives more depth to combat as you can choose which level you want to activate at any given time during your turn (assuming the meter is filled up).

Sounds like a lot to take in? It’s not. You’ll get used to it really quickly, especially when you’re grinding for better gear and experience. Speaking of which, the level up progression in this game is fine, but it feels a tad restricting. Let’s say that you fight a bat and it gives around 20 experience points when you’re around level 5. After a while, you’ve decided that it’s time to move on from fighting those rats with wings and into werewolves or whatever monster is out there to the point where you’ve reached level 8. If you thought that you could go back and easily grind those bats to quickly get those 20 experience points, then sad to say that it won’t be happening.

When you’ve leveled up to a certain point, lesser enemies won’t drop any experience. Although this does make sense, it’s just a shame that the game limits you in terms of how you should progress character levels.

Another thing I’ve noticed is that the overworld feels just as restrictive. While there’s a huge map that you can traverse, there’s always set paths that you have to follow rather than allowing you to freely roam around. Although there are different paths you can take to get wherever you need to, it just gives you the illusion of freedom as you’re still following a line from point A to point B.

Then there’s the matter of frame rate issue. While playing the game, there are certain environments where there’s a noticeable drop. It’s not that it’s bad to the point where it’s a major issue, but it does kind of ruin the experience.

But these issues are all rectified with the different side quests that you can take on as well as the collectibles and equipment that you can acquire. At a certain point in the game, you will be going through exploration areas; these are basically places that you enter which usually contain different sections to meet an end goal. Some exploration areas allow you to choose whatever difficulty you wish to tackle them in: normal, heroic, or legendary. Each of them contains different treasures upon completion, with normal giving you simple items and legendary giving you ones with higher rarity. Just take note that taking on legendary difficulty will force you to restart the whole area from the very beginning, taking away everything you’ve done up to a certain point, should you die. 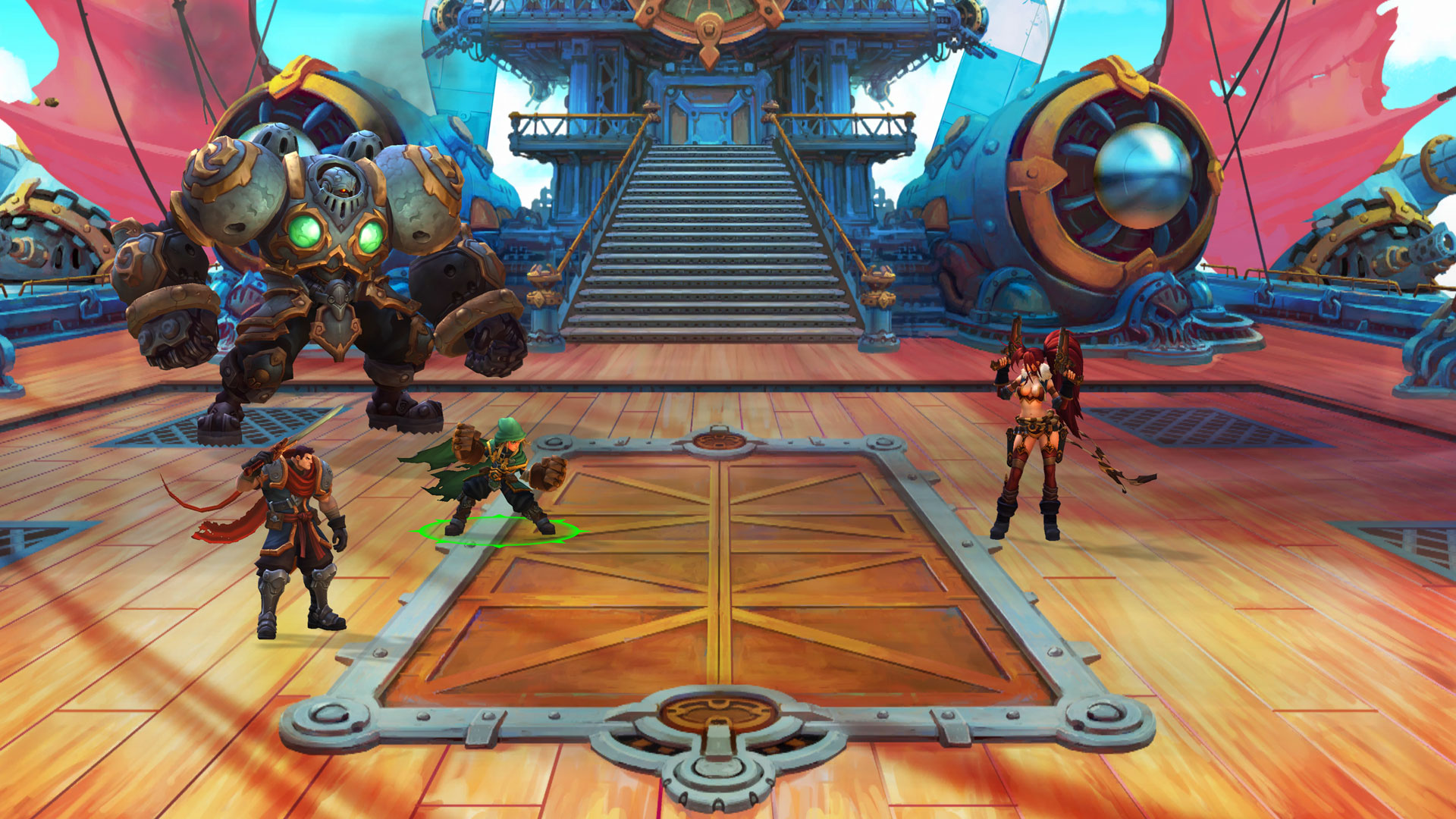 Although there are different difficulties, they don’t change the fact that there are side quests and items galore in nearly all of the areas. As you’re exploring, you might find a book or two which you can read, giving you more info about the things that happened to certain people or particular places. If not that, then there might be traps that you’ll have to avoid all while having to watch out for enemies that’ll chase you until you’re forced into a battle. If that still doesn’t pique your interest, then certain areas have sidequests which often times feel more interesting than the actual story.

Here’s a little example of a good sidequest. As I was venturing the sewers with the task of taking out slimes, I chanced upon a sewer gate where a talking sewer rat was locked in. The rat then proceeded to tell me that he was an alchemist who was cursed by his mentor for petty reasons and that he wished for me to carry him all the way to an alchemy station that resides within the area. After managing to find the station, the rat proceeds to state that his memory might be fuzzy, but he thinks he can make a concoction which will allow him to take back his original form. Once he has finished his creation, he proceeds to ingest the potion and explodes. I was honestly taken aback and my character immediately said “That doesn’t sound good”, which prompted me to assess the station only to discover that the rat had indeed died. It was funny and it was actually a pretty nice surprise. Doing this was actually beneficial as inside the rat’s remains was a ring which contained pretty nice stats. Hey, at least his death was good for something.

It’s little things like that which make this an entertaining game and it’s great to say that there are other moments that are similar to the one mentioned. 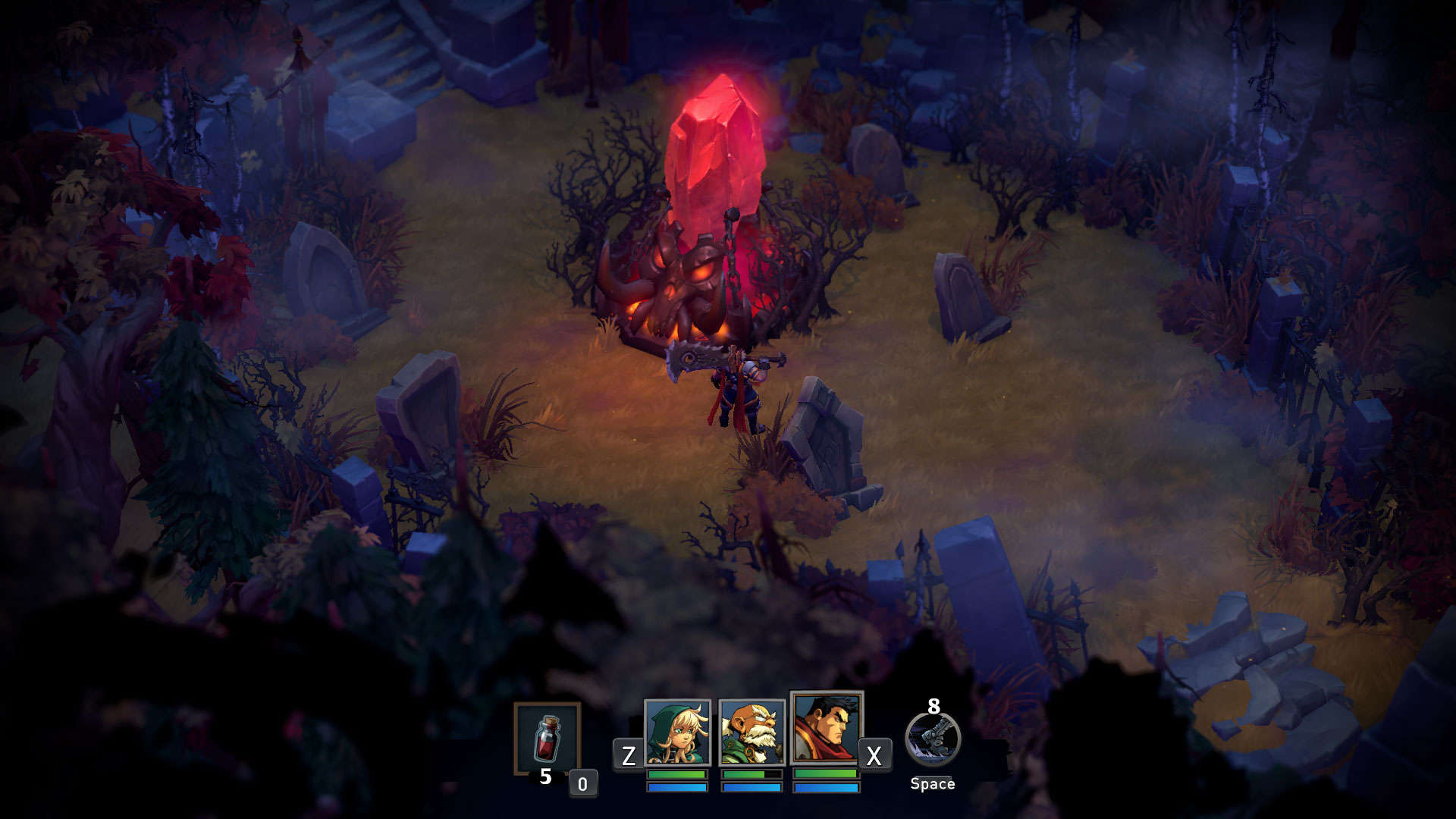 And lastly, the character models and the sound design. Every 3D and 2D model felt organic as they all feel like fantasy comic book characters that came to life. The way that they’re animated is also very well done as just about every character’s and monster’s movement is fluid with every action they make.

The voice acting is superb as everyone sounds exactly as you would hope them to. You see a male Dwarf? He actually has that Scottish accent that we’ve all accustomed Dwarves too. You see a brooding swordsman? Then you can expect him to have a low and deep voice with a dialogue to match. While the music is nothing to write home about as nearly all of them aren’t memorable enough, they still convey the atmosphere that they’re supposed to and that’s something I can appreciate.

Overall, this game is a good RPG title to add to the Switch’s library. If you have the time (and the cash), then you should definitely consider getting Battle Chasers: Nightwar as you won’t be disappointed with what it has to offer.

Battle Chasers: Nightwar (Nintendo Switch) - Review
Score Definition
When the issues of a game are rolled and stomped by its greatness, then it’s something to invest on if you have some spare.
Pros
Great Dialogue
Interesting Side Quests
Beautiful 2D and 3D art style
Simple Yet Engaging Combat Mechanics
Cons
Restrictive Overworld aAnd Progression system
Infrequent Frame Rate Drops.
8
Great