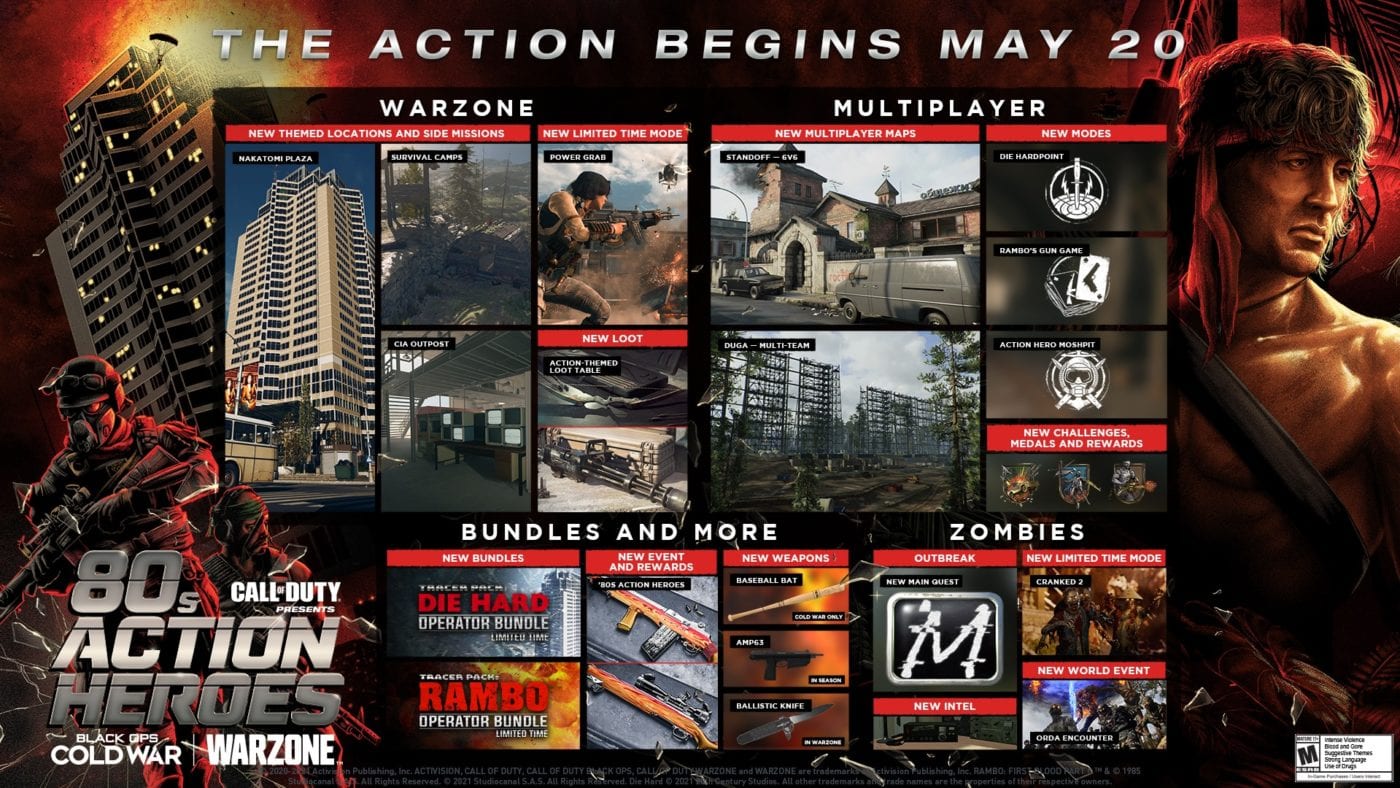 Both characters will be added as operators in Warzone and Black Ops Cold War. The 80s Action Heroes event will start off with limited-time bundles and game modes. It will also have new weapons, maps, and other features that will be expected during this season. It will go live on May 19 at 9 PM PT with new updates to Black Ops Cold War on May 18 at 9 PM PT and Warzone on May 19 at 9 PM PT. And no, you are not suddenly getting déjà vu, they are all different schedules for different things.

“To survive a war, you gotta become war.”

Serving time for murder, highly decorated MACV-SOG soldier John Rambo is offered one more mission – return to Vietnam and locate American POWs. If successful, he will be released, and given a full Presidential pardon…

This Operator will be available via the “Rambo” bundle in the Black Ops Cold War and Warzone Store from May 19 at 9PM PT to June 18 at 9PM PT. This bundle includes the Legendary Operator; two Finishing Moves, including one using his signature bow and arrow; three Legendary Weapon Blueprints—an assault rifle, an LMG and a Knife Blueprint; a Legendary Calling Card and Emblem; and an Epic Watch and Charm.

“Welcome to the party, pal!”

A hard-bitten cop on the streets of New York, John McClane has a talent for being in the wrong place at the wrong time. Now in the fight of his life, he’ll have to rely on his cocky attitude and level head to stay alive.

John McClane will be available via the “Die Hard” bundle in the Black Ops Cold War and Warzone Store from May 19 at 9PM PT to June 18 at 9PM PT. This bundle includes the Legendary Operator, a Finishing Move, three Legendary Weapon Blueprints—one tactical rifle, two SMG, and one assault rifle—a Legendary Calling Card and Emblem, an Epic Watch, and an Epic Weapon Charm.

Also, to be clear, both Rambo and John McClane are NOT skins of previous Operators. They ARE operators.

The Nakatomi Plaza will be added as a new point of interest in the Verdansk map. It will be for a limited time only though so better enjoy the building before it goes away. This is going to be the tallest single structure in Warzone and will include five floors of space that will be familiar to those who watch the original Die Hard movie. It will have multiple optional missions that can be completed during the Battle Royale and Plunder for rewards both in-game and for the players’ profile. This will include Supply Boxes, defusing C4 on the tower’s roof, and interrupting an arms deal that goes wrong so badly. There is also a chance for Operators to crack open the vault and get away with its riches, but there is also a chance that they will get robbed along the way with other Operators.

New Survival Camps will be found around Verdansk as homage to Rambo: First Blood Part II. Find some awesome loadout items or dog tags of comrades. Collect enough of them to collect cool rewards.

One of the aircraft hangars in Verdansk has been converted into the makeshift CIA Outpost.

A new Limited-Time Mode called Power Grab will be introduced too. This pits over 100 Operators across select squad sizes in a battle for supremacy. The starting circle will collapse in a smaller way than the usual version. It will have five stages and there will be no Gulag to escape to. Players will need to revive their squadmates via the Buy Station or by collecting Dog Tags. When a player is eliminated, they will drop a Dog Tag and by collecting them, it can increase their reward ladder.

There is a new Killstreak, the Combat Bow, which comes from Rambo. It is effective against infantry and vehicles. The longer it is pulled, the farther the explosive tipped arrow will go.

There is also the Ballistic Knife from the Black Ops series that is coming to Warzone. It can be a stealth weapon for upclose kills or a projectile blade for short to medium ranges.

Black Ops Cold War will have two new multiplayer maps, which are the Standoff, a 6v6 map and the Duga, a new region in the Ural Mountains, which is good for Multi-Team modes.

There are three new game modes and medals to acquire in this upcoming event. There is the Die Hardpoint, Rambo’s Gun Game, and Multi-Team Elimination. There are also Action Movie-Inspired Medals to acquire that gives a nod to Rambo and Die Hard.

For both games, there are two new weapons like the Baseball Bat and the AMP63. The first one is a classic blunt melee weapon that can be used against enemies and can be useful in a pinch, while the latter is the fourth sidearm that will be added to the arsenal. It is a cross between a self-loading pistol and a fully automatic SMG.