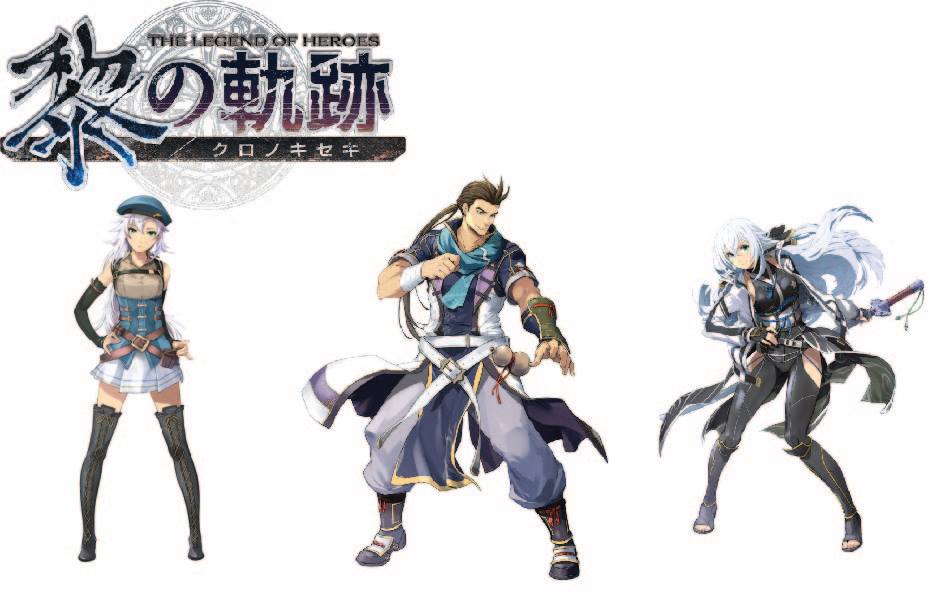 New and Returning Characters Coming to Kuro no Kiseki Revealed

In this week’s Famitsu magazine scans, new and old characters are coming to Kuro no Kiseki and many fans of the series will be delighted to see the appearances of Fie, Zen and including the mysterious enforces of Ouroboros.

After the events that happened in both Crossbell and the Empire, this young bracer journeys to Calvard to help out the bracer guild branch in the Republic side. She has a history of living as a jaeger as a child, and has outstanding physical ability and advanced combat skills. Not only that, she is one of the few heroes that stopped the Blackworkshop’s plan to invade the entire world and is a member of Class VII. While she has a cool atmosphere around her, she can be surprisingly friendly, and often throws jokes at Elaine, her honors student-esque senior bracer.

Zin, known as the Immovable Zin, is an A-rank bracer affiliated with branches in Calvard. After the events in Crossbell, he was recommended to be promoted to S rank. However due to feeling neither his skills or achievements match up to Cassius Bright’s, he remains hesitant about accepting. He accompanies Fie to Crossbell to investigate the unexpected rumors that Ouroboros is lurking in the shadows of the Republic. While tensions between fellow students continue with his junior Taito style disciple occupying a key position in the CID, and senior disciple maintaining an eerie silence at the Ouroboros society he has high hopes for promising junior bracer Elaine and watches over her growth, but she can be stubborn at times.

Walter Kron, also known as the Direwolf , is associated with Ouroboros as Enforcer No. VIII. Although Zin Vathek and Kilika Rouran described him as being kind and competitive in the past, Walter is now much more cruel, sadistic, and sociopathic after falling to the allure of the “Murderous Fist” path of the Taito Style in which he began to lose himself. He makes his return to Calvard in order to proceed with final stages of Eternal Recurrence Plan and will clash with not only his rivals but as well with the new heroes of Calvard, Van and his allies.

Lucrenzia known as the Golden Butterfly, was originally a member of the Order of the Moonlight Horse and joined Ouroboros, alongside Thousand Oathbreaker and Kreuger, when it was destroyed by Ouroboros in S.1194. After the announcement of the Grandmaster third and final plan, she was ordered to travel to Calvard and accompany Walter to hinder the actions of Van Arkride and his allies plus begin the Eternal Reccurence plan.

The lieutenant captain of “Ikaruga,” a samurai group headquartered somewhere in the continent’s ruined east.While she has a playful atmosphere and dazzling looks, she is also known as “Divine Blade of Silver” and is a master of the “Black God One Blade.” She usually wears the latest power suit and wields a jet black odachi that has been passed down in the east as a “treasured sword.”While her face may retain the innocence of a young woman, her expression changes into one that befitting of the name “Divine Blade” when she encounters a strong opponent.Her fighting style resembles the Eight Leaves One Blade style, the magna opus of Eastern swordsmanship that “Sword Hermit” Yun Ka-fai developed.

Mare is Van’s Hollow Core, (Xipha AI), described as “Little girl”. Little information is known about her but when she appears in the real world, she transforms Van into the nightmare-clad Guts’ Berserker Armor known as Grendel. She also works as Van’s navigator but is pratically useless in giving out information.

Also a tease of a familiar character coming back to the series:

More news on Kuro no Kiseki will be announced in their main website and in the YT channel of Nihon Falcom so stay tuned.