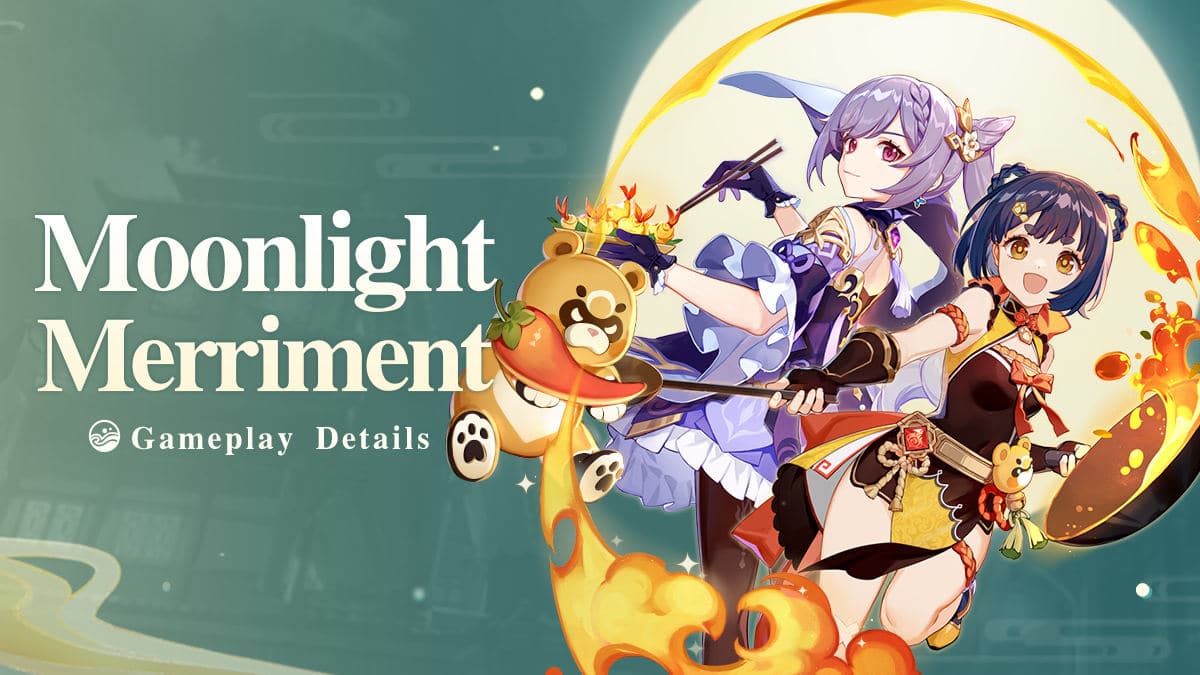 A new event arrives with tons of Primogems to soothe fans.

The first anniversary of Genshin Impact is already around the corner and game company miHoYo has already revealed its events to celebrate it. Unfortunately, the fans are not having it as it offers low rewards, needs participation from the community, and not everyone can win since it will be a raffle for each event. With the anniversary properly starting tomorrow, are we expecting a big change from the game developers soon?

Fortunately, miHoYo has launched the Moonlight Merriment. This is the latest event for the game and will start today, September 27, 2021 and will end on October 11, 2021. Players will have to be Adventure Rank 28 and can only participate after completing Chapter 1: Act 3 – A New Star Approaches and Trulla Chapter: Act 1 – Monstadt Gastronomy Trip.

During this event, enhancing the Luxurious Sea-Lord will yield a Weapon Enhancement EXP Bonus. After completing the event on October 11, 2021, the Moonchase Charms will disappear. In short, these items can only be available within the event time.

The event will be divided into three stages, which are Path of Stalwart Stone, Path of Gentle Breezes, and Path of Austere Frost. Each stage will have its own quests or challenges to complete with rewards to get afterward.

In Chef Supremacy, the Travelers will have to complete a series of event quests and this will include Moonlight Merriment: Part I and Part II. Part 1 is where everyone will start and will need to reach Festive Fever 1000. When it reaches that point, Part 2 will be accessible. This will offer rewards like Primogems, Hero’s Wit, and Mora.

After completing Moonlight Merriment: Part I, Travelers will be able to access the Cuisine Machine Test Run quest. Finishing this quest will reward players with Primogems, Hero’s Wit, Mora, and recipes for Oncidium Tofu, Rice Pudding, and Braised Meat. Note that this cannot be completed in Co-Op Mode.

Completing Moonlight Merriment: Part I and The Many Matters of the Moonchase Festival will make the Travelers gain access to Moonlight Seeker challenge. During the event, upon unlocking any phase of the game, the expediting of the corresponding area in Moonlight seeker will be opened as well.

After the progress bar gets full, players will be able to gain rewards like the event-exclusive claymore Luxrious Sea-Lord, its refinement materials, Weapon Ascension Materials, Mora, and Festive Fever. Opening Mystmoon Chests can also yield Primogems.

Go to Liyue Harbor and meet Linyang for clues. She will mark the location of some of the Moonchase Charms and Mystmoon Chests on the map that were not found to help you.

Finishing Moonlight Merriment: Part I and The Many Matters of the Moonchase Festival will open up the Trail of Delicacies challenge. Just like the Moonlight Seeker, any expedition of the corresponding area in Trails of Delicacies will also open in the standard version.

Players will have to offer delicacies in order to gain buffs, defeat the enemies, and then complete the challenge. That is the basic summary of this event. Players will first have to go to the Challenge Locations by just following the prompts on the event page. After that, they will find powerful Leaders among the enemies that will have special characteristics to watch out for like gaining a lot of HP after entering a certain HP percentage. It only happens once, so it is a fair challenge. Eliminate all in the area in order to complete the challenge.

To make it easier for you, a wind current will appear. This will make it quicker for players to move to the next challenge area. After completing all challenges in every area, you can now offer delicacies via the event page. If all accumulated delicacies that were offers have reached a certain amount, they will get the Trail Comforts. They can help you a lot in battle, but they only help you during the Trail of Delicacies challenges.

Each of the three Trail of Delicacies areas have different kinds of Trail Comforts. Each of those will not take effect in another area.

According to some rumors, miHoYo will be holding the main 1st-anniversary livestream on September 28, 2021. No details on what it contains, but there could be an official reveal later on. There will also be a Tokyo Game Show 2021 Genshin Release Eve! Special Broadcast on October 3, 2021, and will run for less than an hour. It should appear on the official TGS YouTube channel.