Save the internet from evil computer viruses with friends 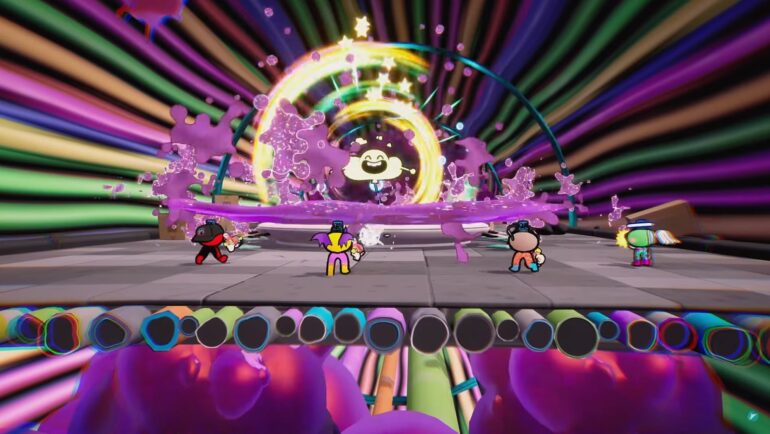 Publisher Skybound Games and developer Toylogic have announced today their new upcoming game, Glitch Busters Stuck on You, a fun and frantic co-op shooter perfect for core gamers and family-friendly players alike. In this game, players join forces to save a virtual world under threat from nefarious computer viruses.

Glitch Busters Stuck on You is set to release worldwide in Winter 2022 for PlayStation 4, Nintendo Switch, and PC (via Steam). The game will also be playable on PlayStation 5 via backward compatibility.

“Toylogic was built around the idea of creating memorable gaming experiences that push the boundaries for what the medium can accomplish,” said Yoichi Take, President of Toylogic Inc. “Glitch Busters Stuck on You is the result of our team working hard to truly understand what makes a great co-operative game and produce something that stands out within the industry. We’re delighted with what we’ve accomplished and can’t wait for players to soon join forces to battle the evil virus threat.”

About Glitch Busters Stuck on You

In the far-flung future, the AI that populates the internet comes under attack by mysterious viruses – and it’s up to a squad of Glitch Busters to keep them from infecting every AI in the virtual world! Players must work together to exterminate this deadly threat across six inventive and colorful worlds packed with various missions and stages, including a towering metropolis and roaring volcano. From Tube City to the Social Forest, all facets of the internet are showcased in a fun and vibrant aesthetic.

Throughout the game, there are hordes of enemies to encounter, so it’s only natural that the Glitch Busters have an incredible host of power-ups and unlockable weapons to help save the world, including magnetic abilities to attract and repel, alongside wacky weapons like the freeze gun to hold your adversaries in place. Players will vote on useful items to power up the squad and can even combine their vehicles to transform into a giant robot.

With the option to play with friends via split-screen co-op or squad-up with players around the world and even join forces with intuitive bots, the options for building the ultimate virus-busting team are endless.

Glitch Busters Stuck on You is set to release worldwide in Winter 2022 for PlayStation 4, Nintendo Switch, and PC (via Steam).