Aggelos Review – Too Similar to the Legend of Zelda

This 2D side-scrolling action role-playing platformer is fine for what it is, but it undoubtedly borrowed a lot of elements from an age-old Legend of Zelda game – if we’re going to get specific, then I’m talking about Zelda II: The Adventure of Link. 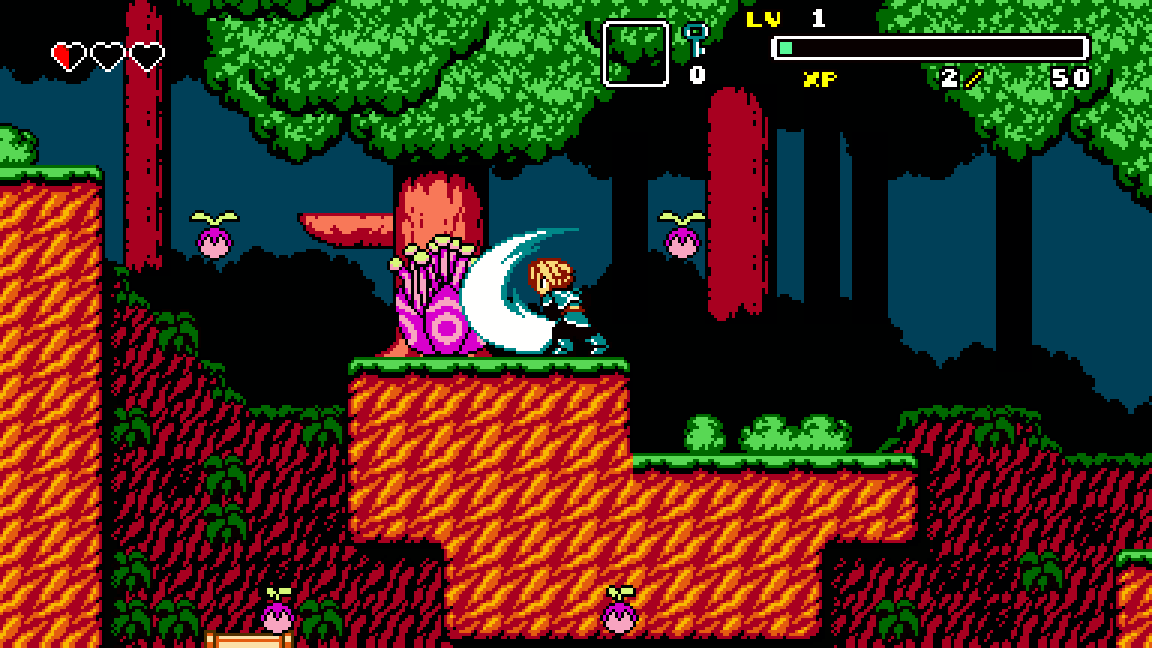 There are also other elements it borrows from one of Nintendo’s biggest franchise as the plot alone feels reminiscent to that of The Legend of Zelda: A Link to the Past. You start off the with one of the most bare-bones introduction you’ll ever see out of an RPG. You’re told that you, the player, felt something was off in the kingdom and that you’ve decided to check things out for yourself.

A couple of bad guys and jumping, slashing here and there and you soon meet the kingdom’s princess. Just before she’s about to kidnapped/killed by a goblin, you rescue her just in the nick of time. She then tells you to make your way to the castle where you find out about the game’s overall plot. A villain named Lord Vammer is trying to merge your world and the dark world where creatures of death and destruction await. You’ll need to gather the earth, water, air, and fire elemental rings to put a stop to this.

Now, doesn’t that seem all too familiar?

It borrows so many elements from past RPG’s that it has nothing unique going for it. What’s worse is that you won’t feel anything for the people in this game. There’s barely any character development, especially that of the hero you control; it definitely feels like you’re controlling a cardboard cutout. It’s clear that the developers wanted him to capture what Link did for most players back in the day, but it doesn’t help if he doesn’t have a name or nothing for the player to emotionally attach with. 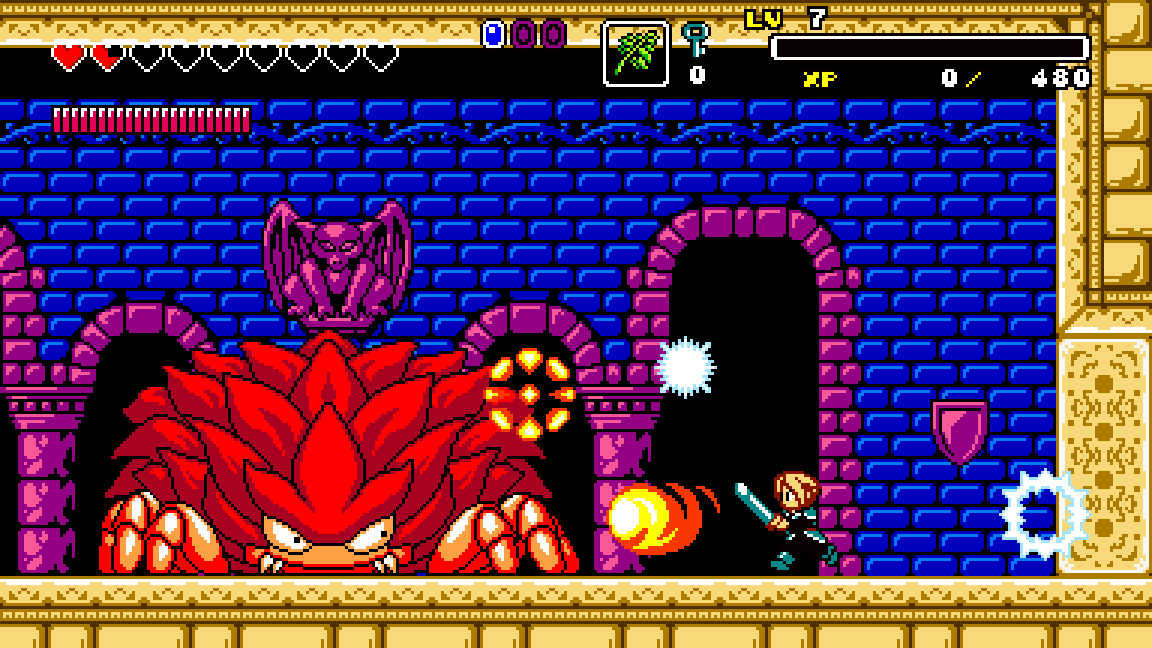 As for the other characters? Boring. The king and the princess are there to tell you that the kingdom is in danger and you’re it’s only hope. That’s all that they do. The other NPC’s? Their dialogue isn’t engaging in the slightest. They don’t make you want to learn more about them or the world itself.

Now for the gameplay. As mentioned before, this game is a 2D sidescrolling, action adventure platformer with a mix of RPG elements. So you jump, slash, and use certain abilities whenever the situation calls for it. You have heart containers which represent your health and a sort-of magic meter which fills up whenever you attack enemies.

This game also has an inventory where you get to check out the items you can use or weapons and armor you’ve acquired throughout your playthrough. I will admit, it is nice seeing your character sprite changing its looks whenever you equip different pieces of armor. Even some abilities look nice when you see them being animated.

Although I say all this, they’re nothing that we haven’t seen before.

And that’s the main problem with this title. It doesn’t have anything that sets it apart from other games of similar genres.

Remember when I said that this game was way too similar to The Legend of Zelda franchise? Well, in order for you to gather all the elemental rings, you need to enter specific dungeons, take the treasure which holds the item which allows you to progress further, and beat the boss guarding the ring – which provides you with an extra heart container once you win. Yep, let that sink in.

As for enemy variation, I will give the developers some credit. There are some standard monsters which took me by surprise with their attack patterns, but then there are those that are way too obvious. Bosses aren’t too intimidating as you feel like you can just keep throwing your body against them until they die – although there are some which require more degree of thinking, they’re nothing too challenging. It should be noted that the developers really wanted this game to be a throwback to retro titles. Why do I say this? That’s because enemy placement can be a tad unfair at times and there’s knockback whenever you take damage.

Now whenever you kill enemies, they drop coins and experience points. This is where the RPG elements kick in as you’ll need the coins to purchase certain items like potions or your battle equipment. The experience points are used for leveling up your character which eventually lets you use certain abilities. These two things give the game a nice sense of progression as it gives you something to work towards. 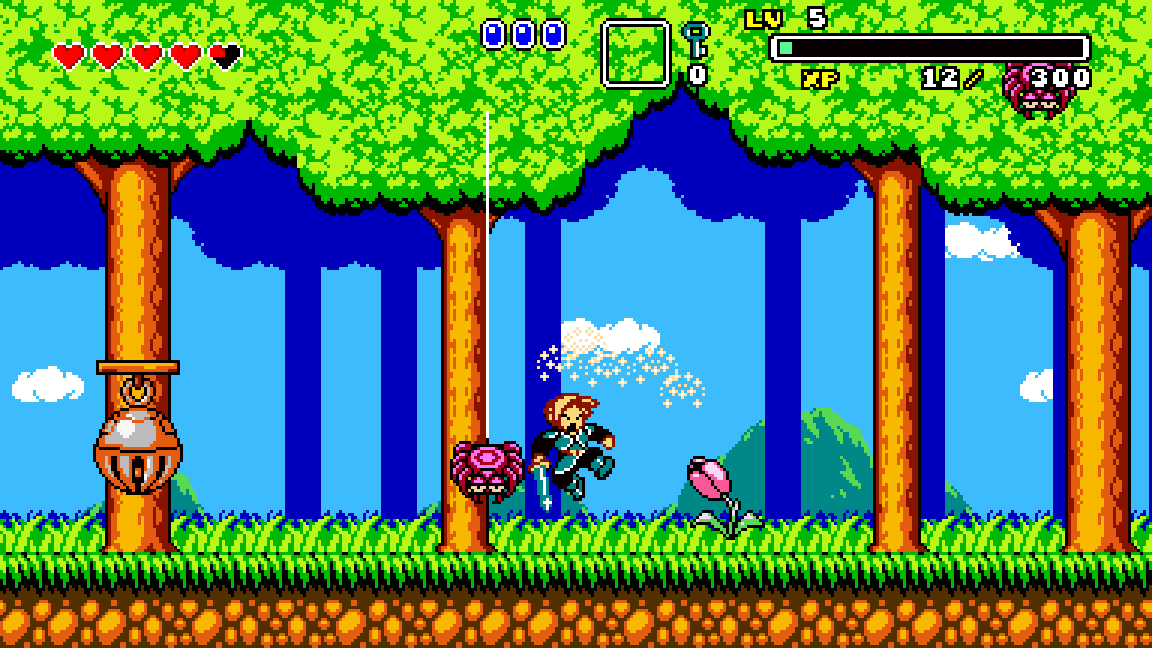 What I don’t like about the game are the environment and level design. The towns you go through feel bland and there’s almost nothing special about them – aside from one being underwater, another with a library and other minor differences.

As for the level design, some of it can be downright unfair. A perfect example would be in the earth temple. There’s a particular section of the dungeon where you need to be pixel perfect in cutting certain rocks to create a platform to get across to the next area. Mess up once and you’ll have to exit and re-enter the room just to get another shot – there’s even a tiny obstacle that makes things a bit more difficult for you. And this is in the first dungeon of the game!

The music is something that’s left to be desired. None of them will stick to you at all as just about all of them are forgettable. The only one I remember would be the earth temple’s theme, but only because I was stuck there for a while!

All in all? This game is nothing too impressive. You’re better off playing actual classic titles because at least those have way more to offer than this game. Not saying that this game is totally bad, but it could have been so much more. 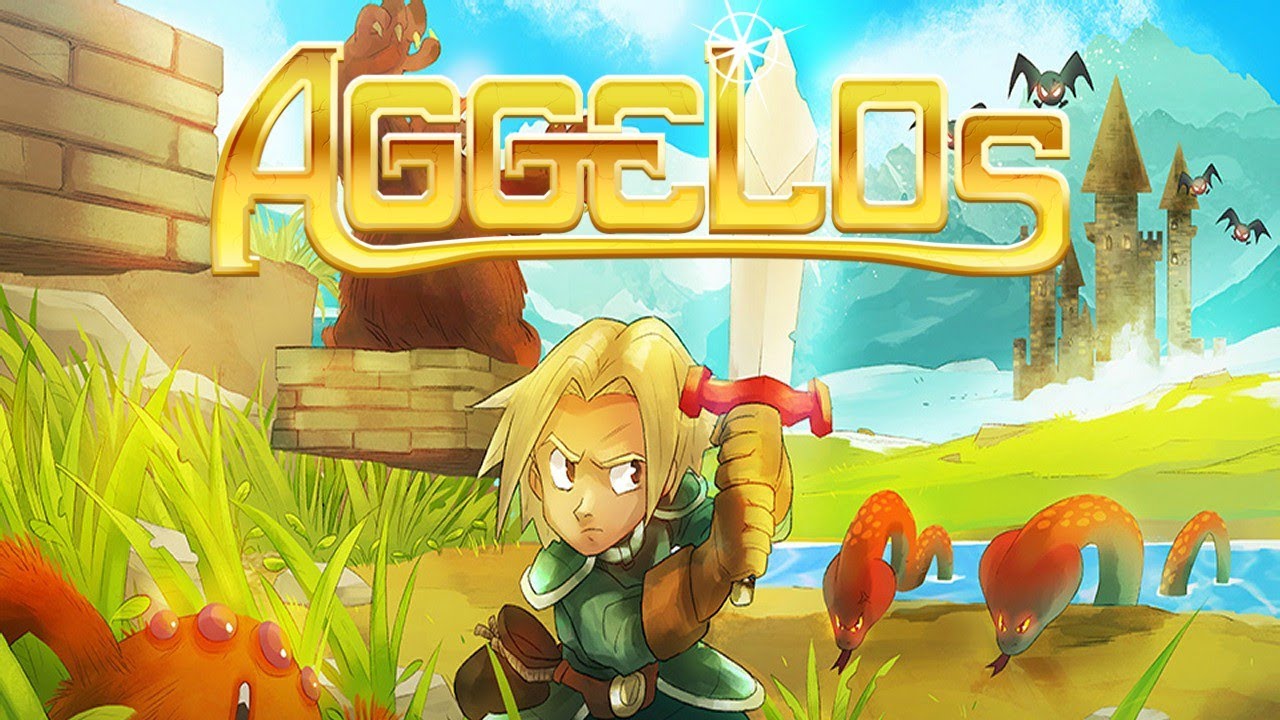 Aggelos (PC)
Score Definition
You’ll be left out with a “meh” after finishing the game. What game did we just play?
Pros
Detailed attack animations
Good sense of progression
Uninspiring level and environmental designs
Cons
Bland characters
Forgettable soundtrack,
Not unique by any means
4
Below Average