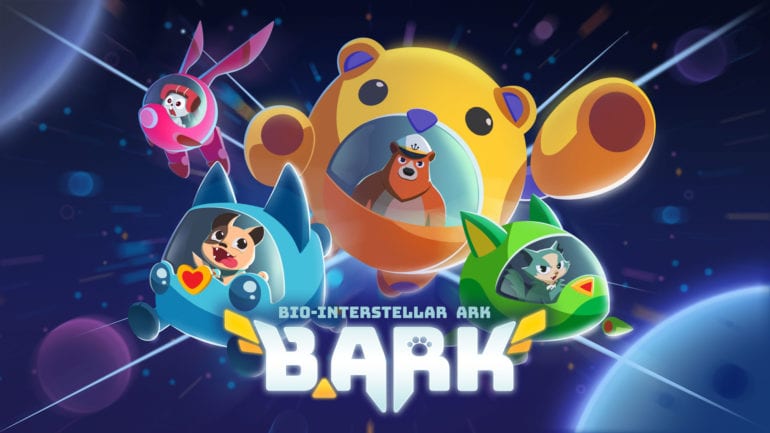 The idea seems very simple on paper – get a full crew of cute and cuddly animals, put them in equally cute space pods, and tear through the solar system on a quest to save humanity! Pretty much par for something the everyday gamer would consider as a ‘good’ sounding idea, right? Well, nobody told me that B.ARK was actually going to be incredibly fun. In fact, as cute as it is, the game has no right being this good. And yet here we are.

Just recently, we got our hands on the Steam demo of B.ARK. First impressions were as follows, “this game’s cute. It’s gonna be a cake walk.” And surely enough I was wrong. (on the second part.) The first first and only level in the demo kicked my ass hard. Granted, I had no idea what I was doing, and didn’t know that Lucio, the bear, had a hitbox the size of a fridge. And I was playing on Hard difficulty.

Excuses aside, I did have a blast playing the initial level in the demo. Without trying out the other characters, I can tell that movement was reactive and on point. And I’m happy that is the case because I needed to be reactive to everything that was flying by on screen. Oddly enough, it was getting used to not holding down the Z key that took up the most time. I’ve been playing shoot ’em ups for years, and letting go of the key for a charged shot was counter-intuitive to everything I’ve known. But I guess that’s part of the learning curve.

After getting owned by the cyber fish armada, I decided to turn dial back, like way back. I decided to pick up Marv. (More so in an attempt to not embarrass myself a second time.) I had an easier time on Normal, and even finished it on the ‘first’ go? The thing is though, it was in that run that it all started to click. I began to notice little things like getting hit the first time drains a single power bar, yet it’ll remain in the same power level. Getting hit again will result in losing a power level. I thought it was really neat to able to recover right after getting hit the first time. That’s where the real fun started.

Playing as the whole crew yielded some interesting results. Felicity and Marv were straight forward enough. Playing Lucio for the second time had some confusing results. Despite having exploding bullets, Lucio seems to have the lowest Time to Kill. Which I found strange for a bear who uses explosive rounds. But maybe I was missing something. Now for Barker… Honestly, I was expecting the Shooting Buddies to be shooting besides the pod like any other game. I was not expecting for the turrets to be tracing the pod’s movements. That was very cool. And the fact that they can’t get killed by enemy bullets will make for some interesting timing and positioning plays against bosses.

I had a great time playing B.ARK in single player. So much so that I invited my friend over via remote play. But that’s where the problems started to happen. Using remote play, I was able to stream my game to his computer. But during the 45 minutes of playing together, we had no bloody idea how to unlock multiplayer. I tried using a PS controller on my end. No luck. We tried assigning different keys on different players. That only ending up with us not being able to return to the main menu as the up and down keys were different now. In the end, we just decided to abandon the initial plan and did stupid things like me controlling the weapons while my friend helmed the pod’s controls.

All in all, I’d say the game’s in a good state so far. The opening cinematic was surprisingly heavy, and set up events quite nicely. I like the noises the animals made while they were talking. It reminded me of Starfox, actually. I just hope the issues with multiplayer resolve themselves soon. Even if it means buying another copy. This game seems like it’s best played with friends. And I don’t want anything getting in the way of that.

That about wraps it up for this preview of B.ARK. I can’t wait to play this game when it actually comes out. I’ll still hold back on recommending multiplayer till I see it actually working. But other than that, it’s looking like a gem of a shmup.