Berserk and the Band of the Hawk – Review 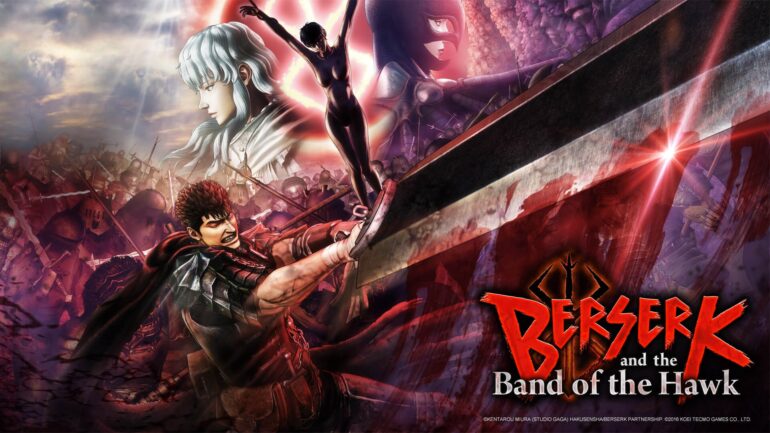 Violence, bits of gore, war, a story of friendship and passion, and more violence, that’s your basic summary of Omega Force’s Berserk and the Band of the Hawk.

Set in Medieval Europe, during the Hundred Years’ War (Entitled The Golden Age Arc), the mercenary Guts chances upon Griffith, the leader of the famed mercenary group called the Band of the Hawks. Wanting Guts’ strength and power in his ranks, Griffith forces him to join his band by besting him in a one-on-one duel. Guts’ fate and destiny is then sealed as he follows and finds friendship and camaraderie with the rest of the Band, as well as with the skilled, charismatic yet dangerously ambitious Griffith.

I have neither read nor watched Berserk. However, I have remained a fan of the Dynasty Warrior series, which combined its hack-and-slash format to Berserk’s style and story. My fresh perspective of the plot has allowed me to experience it fully, all its surprises and heartfelt moment. But even those who are familiar with the manga and/or anime will not be disappointed as the gameplay fits the story perfectly. A violent story meets violent hack-and-slash gameplay.

To those unfamiliar with Dynasty Warriors, the hero the player controls (in this case, Guts, during story mode), traverses a map with hundreds to thousands minor enemies and bosses to defeat. Your goal depends on the situation and story, as some would only require the player to defeat a certain boss, capture certain areas, or both. The thousands of minor enemies are like fodder to your “berserk” gauge, wherein the characters strength takes a temporary boosts and allows you to perform a special move. During important stories/missions, you may only control its main protagonist, Guts, but in some levels, you are given the option to control the other members of the Band of the Hawks (if unlocked).

Let’s be honest, this format gets painfully repetitive. The map will also feel limited, as in some levels of the story, the map will remain the same with only different enemies. When fighting, it hardly feels like you’re actually doing anything apart from spamming the attack buttons without forming a concrete strategy. This is the same in some boss fights, wherein it doesn’t really feel like a boss fight. Your character is a reckless sword swinger, so this format may make sense if one would put his or herself in Guts’ personality. However, as much as I did enjoy, I would occasionally feel bored; I may recommend playing the game straight on Hard mode.

Berserk and the Band of the Hawks starts at the The Golden Age Arc towards The Hawk of the Millennium Arc. As someone new to Berserk’s story, I thoroughly enjoyed the addition of cinematic cut-scenes, especially during the Golden Age Arc, which were taken from the 2012 anime. The game also brings you closer to not only Guts, but also the members of the Band of the Hawk, forming an attachment to the characters through its cut-scenes and in-game missions.

Another notable feature of the game is its length. I must admit that I have not finished the entire game, completing only the first of its arc. The Golden Age Arc is long enough as it is, and being able to play through two more arcs gives you an entire experience that will prevent you from feeling empty or lacking after completing the story. The characters’ development and how the game establishes your attachment to them continuously evolves. For a violent, bloody game, it’s also marvelously human.

Though you may do get bored from time to time with its unchallenging levels and repetitive gameplay, blasting through enemies and beating monsters’ asses are still fun experiences. You may also choose stay for its gripping and emotionally captivating story, as well as the intensity of the characters you get to control. I love it simply for its stunning manga-style yet realistic graphics, its story, and because I can still appreciate a Dynasty Warriors format. You may choose it for these reasons too, and especially if you are someone that enjoys a good hack-and-slash.