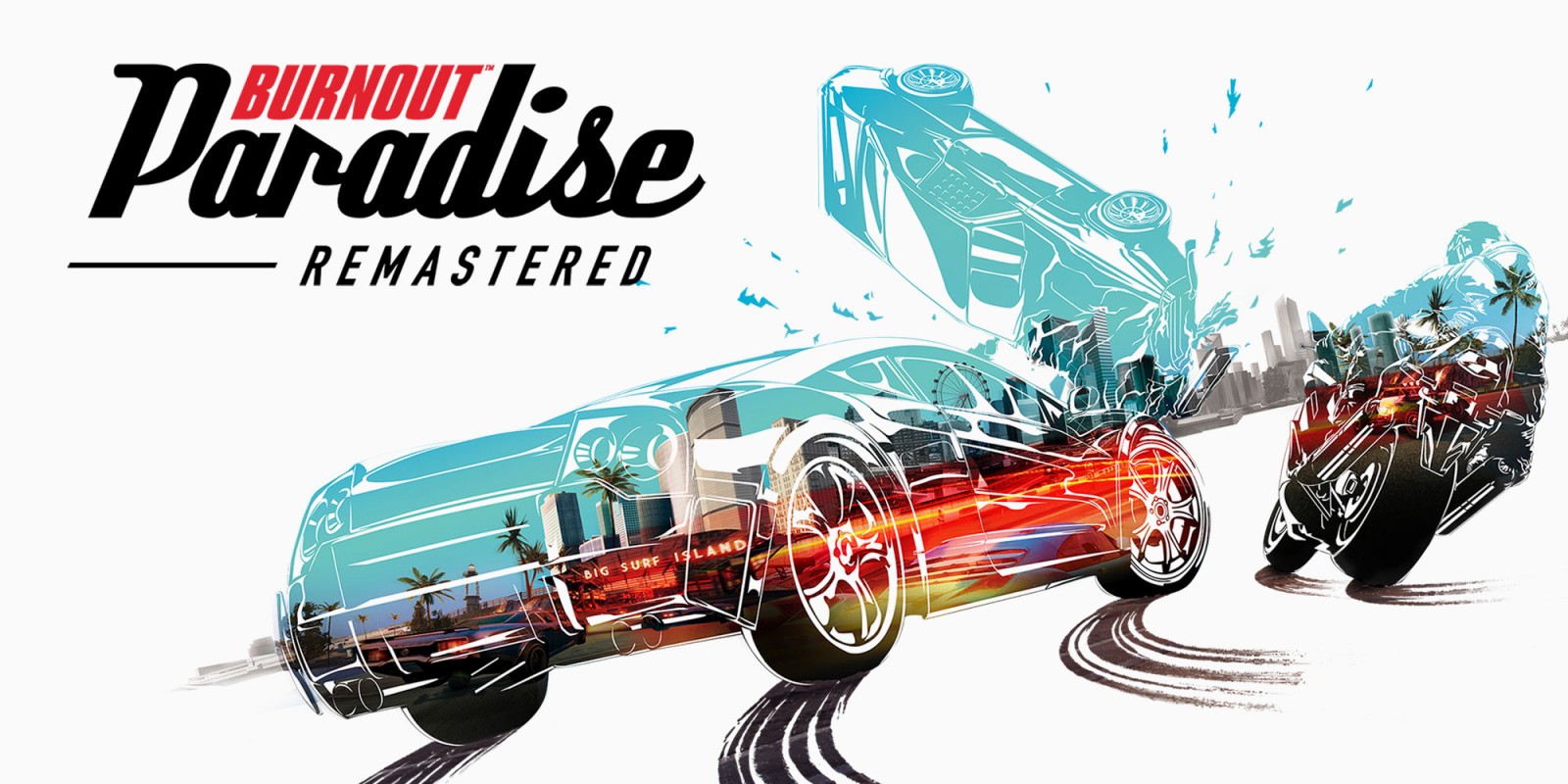 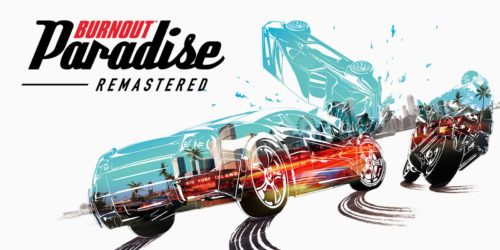 The Burnout series is most famous for spectacular crash physics, shown through dramatic camera angles. Equally as important, it is a series chock-full of thrilling race moments. Burnout Paradise, however, takes those same thrills away from the race tracks and injects them to the streets of Paradise City. First released in 2008, the original Burnout Paradise is widely considered a modern classic. So, how does this game hold up on the Switch in 2020? let’s find out.

Burnout Paradise Remastered is an open-world racing game set in the picturesque area in and around Paradise City. In this game, players have to compete in events that test their skills in various ways. Players roam around the unlocking events at intersections, keeping note of the telltale signs of shortcut, and super jumps that’ll come in handy in certain events. Other activities include jumping through billboards and hunting other vehicles for players to claim for themselves.

There are 5 different main events that the player can take part in – Race, Road Rage, Stunt Run, Marked Man, and Burning Route.

The race sets a starting point and a finish line – usually 1 of 5 landmarks at the edge of the map. This kind of set up requires the drivers to come up with their routes towards the finish. The first one to the finish line wins. Stunt run allows the player to be a little more clever as it asks them to perform jumps and tricks to hit a target high score.

Road rage and marked man do things a little differently. In road rage, drivers do their best to force others off the road, with the hopes of destroying their car in the process. Reach a target number of takedowns to win the event. The marked man event asks the player to reach a target location while surviving the onslaught of a pack of hunters.

The final event type is the burning routes. It asks the player to drive a specific car to a landmark within the time limit. It’s a good way of encouraging players to drive a wider range of vehicles. Plus winning this event adds a point to the license and unlocks a better version of the vehicles.

With the DLC, players have access to motorcycle events and Big Surf Island events. Bike events are time trials that are set in either daytime(Burning ride) or nighttime (Midnight ride). Winning adds a point to the bike license. Big Surf Island events function like the ones in the base game. The catch, however, is due to the island being smaller, the events are tougher and more tightly condensed. They often ask the player to drive relay races around the island. (Give it a break, the island’s kinda on the small side.)

The goal of the game is to rack up points so that players can advance their license to a higher class. The class license is just about the only thing that remotely resembles a progression system. The game technically ends when the player reaches the Burnout class. But gluttons of punishment will want to keep note that there is a higher rank – the Burnout Elite class.

The controls work very well with the Switch layout. (Which isn’t exactly saying much considering the Switch doesn’t have much of a library in terms of driving games.) ZR and ZL accelerate and brake(or drift), respectively. The L trigger allows the player to look back, while the R trigger changes the soundtrack.

Boosts fall under 1 of 3 types – Speed, Aggression, and Stunt. Each has different requirements for gaining boost faster. But if left alone, they recharge at almost the same rate.

Vehicle selection is where it’s at. Players choose from over 100+ different vehicles that perform somewhat differently. Vehicles stats are divided into 3 categories – speed, boost, and strength. All 3 categories are pretty much self-explanatory. Though strength is more than just push power. It also describes a vehicle’s ability to take a hit before flipping over in a metallic wreck.

One of the features that I, personally, keep coming back to is Showtime. By pressing the L and R triggers at the same time, the player activates a destruction minigame where the player must guide the metal husk of their vehicle into other cars. Pressing the B button flips the wreck over, and when in contact with another car, they blow up in a fireball. The idea is to cause as much destruction as possible while maintaining momentum.

It’s a fun little distraction from the mind-numbing task of leveling up the license. Aiming for trucks nets more dollar figures, while crashing into buses adds a multiplier into the mix. I don’t know if larger vehicles like a van while causing more destruction, but I often use lighter cars so that I have more control over where they ultimately land.

As with everything that goes along with the Switch, the inevitable question comes up – does it hold up in handheld mode? Yes. Yes, it does. Whether the player decides to play in handheld mode or docked mode, the game runs consistently with little to no screen issues. As expected though, when in handheld mode, graphics quality goes down a notch. It’ll require you to look a little harder to notice to difference but racing fast is what ultimately matters. Also, the aspect ratio is wider on docked mode, but that’s to be expected at this point.

My only issue with the visuals occurs only during nighttime events. When driving at night on handheld mode, headlights and taillights of civilian cars are so small that it’s practically a dot on the Switch’s already small screen. I wish they’d at least brighten it up, or maybe it’s just me. In either case, simply setting the clock to daytime hours usually fixes it. Otherwise, I drive a lot more carefully to avoid head-on collisions. (In my opinion, the whole nighttime map, in general, is too darn dark for its own good.)

The mixed track for the game is a combination of songs from past Burnout games, late 2000’s popular music, and classical music. I especially take delight in driving another car into the railings while listening to Vivaldi’s Four Season – Spring. (I don’t know, there’s something about slow-motion crashes and classical music that fit together so well.) In short, the game’s audio is very well done. Both in the music department and the sound effects department.

A feature that goes perfectly with the Switch is the Party mode. In the party mode, 2 to 8 players compete with each over a span of 1 to 8 rounds. Players choose between 3 main events – Skill, Stunt, and Speed. Each event comes with it’s own minigame that test a player’s skill in various aspects of the game. When a player’s turn is complete, the pass the console (or the controller) to the next player in line. They keep doing this until all the rounds are complete. The player with the most points at the end of the game, is the winner.

Burnout Paradise Remastered for the Switch is a solid game. However, being an expensive port of a much cheaper game on other platforms, it’s the best selling point is the fact that you can play this game on the go with no frame rate issues. Which is to say that it also handles pretty well on docked mode. It may not be full HD, but when it runs smoothly as it does, I don’t mind it running at just 720p 60fps.

If you’ve never played a Burnout game before in your life, and the only platform you play games on is the Switch, it’s practically a no-brainer. With that being said, veterans of the series may want to play this game for a mix of convenience and nostalgia. And probably nothing else. But hey, this is the first Burnout game on the Switch and a fine game at that. A fine game that’s readily available on other platforms. (Just sayin’)

Burnout Paradise Remastered – Review
Score Definition
When the issues of a game are rolled and stomped by its greatness, then it’s something to invest on if you have some spare.
Pros
Fast-paced fun on the go
Holds up well on both handheld and docked mode
Comes with a lot of DLC content from the get-go
A solid port of a classic game
Cons
Headlights and taillights at night aren't as bright in docked mode
A noticeable visual downgrade when in handheld mode
A bit pricey for a remaster on launch
8
Great