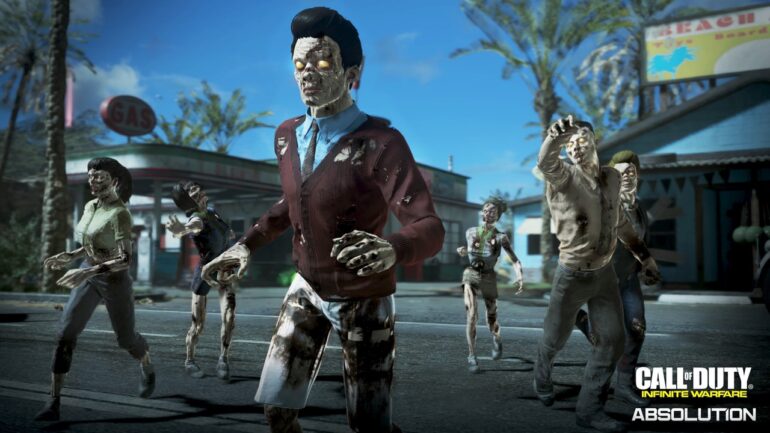 “Our team couldn’t be more thrilled to introduce another wild, twisted zombies experience in Attack of the Radioactive Thing!, which continues the story and adds some awesome new gameplay,” said Dave Stohl, Studio Head of Infinity Ward. “For our multiplayer fans, we’re delivering four diverse maps that reward the different gameplay styles our community has embraced since the game launched last year. We can’t wait.”

Attack of the Radioactive Thing!, the next action-packed chapter of the Call of Duty: Infinite Warfare zombies experience, once again features the return of Willard Wyler, the enigmatic movie director villain portrayed with voice and likeness by Paul Reubens (Pee-wee’s Big Holiday, Gotham). Wyler has trapped the four protagonists inside an all-new horror film, set in the 1950s and in the style of the Creature Feature films of the era. Players will fight a new array of zombie enemies across a ravaged beach town where a government science experiment has transformed the residents into flesh-devouring zombies and introduced a new biological menace into the city. Additionally, horror movie icon Elvira, played with voice and likeness by Cassandra Peterson (Elvira: Mistress of the Dark, Elvira’s Movie Macabre), will help players survive and give them gameplay tips and side quests with her unique Elvira style. New weapons, traps and more will augment the hallmark Call of Duty action, with Seth Green (Robot Chicken, Austin Powers) as “the Scientist;” Ike Barinholtz (Neighbors, Suicide Squad) as “the Rebel;” Jay Pharoah (White Famous, Saturday Night Live) as “the Soldier;” and Sasheer Zamata (Saturday Night Live, Inside Amy Schumer) as “the School Girl,” all making a return from the ongoing story in this all-new experience.

In addition to Attack of the Radioactive Thing!, Absolution will also include four new multiplayer maps:

Call of Duty: Infinite Warfare Absolution releases on 6th July 2017 first for the PlayStation 4, with other platforms to follow.