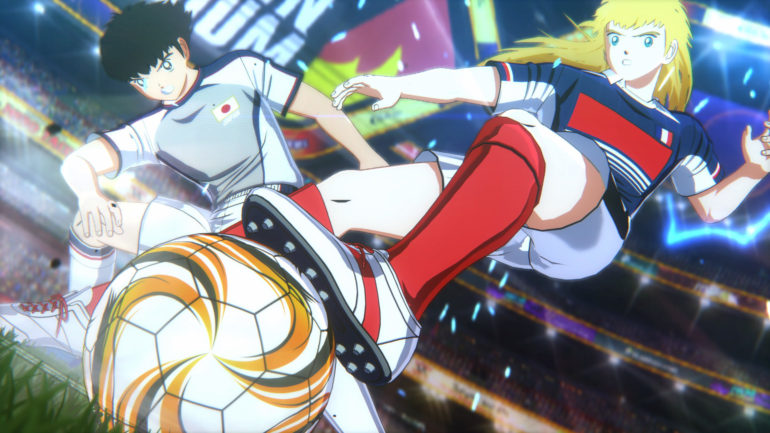 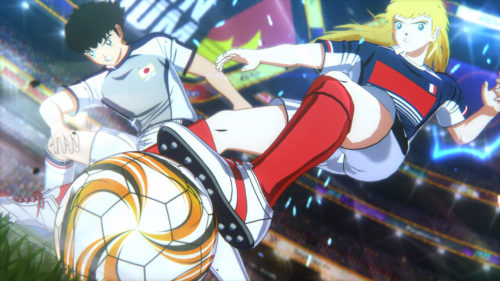 Over the years sports animes have always been a great genre to watch and captivate those that do decide to spend their time with it, it usually has a certain charm to it that can make people interested in the sports that the world of the anime revolves around in. In my own experience, there are sports that I would’ve never thought I would like or play even going as far as me hating sports as a child until that moment I decided to watch Slam Dunk which changed my life forever and made me love basketball and get into it which actually nearly cured my severe asthma and made my dad proud of me.

Captain Tsubasa: Rise of the New Champions definitely has the aforementioned charm especially so since I have no real interest in the sport of football/soccer but after playing this game it has certainly gotten me interested in the sport a bit more or at the very least gotten me interested in watching the anime which I have known since childhood but never bothered to watch even a single episode.

This game makes me feel like I am playing an actual sports anime in-game form it has most of the checkmarks in the bag when it comes to the sports anime formula:

✔Nakama (Friendship)
✔Epic Sports Moves that are almost always seen in Anime
✔Lots of Dramatic Dialogue involving the Sport, Friendship, and Rivalries
✔Heated Rivalries
✔Actual stuff that can make your character stronger over the course of the story
✔Teamwork
✔Epic Goals that are blocked by very challenging odds

And probably a lot more that I missed but this game definitely has most of them.

While the gameplay is presented in such a very anime way, the mechanics actually has quite a good amount of depth that one can easily make use of and even exploit the opponent’s lack of knowledge of the mechanics, especially when playing against another person. Discovering the mechanics is part of the fun but there are a few that I want to talk about since they kind of bug me despite how cool they look when you’re playing. The 1st bit is how stealing the ball works, the sliding tackle looks fine however the regular tackle sends the opposing player possessing the ball flying which looks like a foul that’s easily worthy of a yellow card and yet in this game, the referees are perfectly fine with that which looks cool but makes the game less realistic but then again it’s an anime-based game. The 2nd gripe I have is how whenever you try to make a shot the goalkeeper somehow almost always gets to touch the ball which completely destroys the realism and while I do like it a lot because of how it looks so cinematic, awesome, and unrealistic I wish the game tones it down where the goalkeeper doesn’t get to touch the ball all the time yet in my experience it only happens during certain cutscenes.

I love how trying to score the in the game works since many times the characters would go into something like a cutscene just to attempt to kick the ball into the goal and for the special characters they even get their own anime like special moves with special animations that go with it. It also isn’t limited to just scoring since there’s also special blocks and goalie catches which of course looks epic and anime as hell. There’s even a dribble move that basically anyone can do which the devs even bothered to make it look as cool as any anime special dribble move that one can imagine. Then there’s the V-Zone system wherein doing some sort of cool looking skillful move fills up the V-Zone meter and it buffs your entire team though in my experience it barely does anything aside from maybe increased stats and mainly use it for the fast shot charging and even when your enemy has it activated I could still easily tackle and dribble over them quite easily though you could always save the meter for your goalkeeper to ensure that your enemy’s shots are completely blocked and pull off some awesome animation while you’re at it.

One more thing I’d like to note with the gameplay mechanics is that trying to score against the enemy feels very unconventional. Rather than the usual wherein the goalie just tries to catch the ball and the scorer tries to figure out where’s the best spot to shoot it that the goalie will have a hard time to reach it, it feels more like you’re trying to hit a wall with relatively high HP so it feels like the more shot attempts you do the more his HP or in this case his stamina will lower and eventually cave into the shots allowing you to score while far from the norm is something I believe to be a nice way to change things up and possibly make things more challenging for those use to football/soccer games.

The game features 2 story modes wherein you get to play with either the titular protagonist Captain Tsubasa himself or a character of your own creation. The story mode where you play Tsubasa is recommended for those new to the game as the original character story mode is harder but has more story content and is great for personal character development for a competitive play which we’ll get into later. Tsubasa’s story mode has a lot of cutscenes and it adds a lot of stories and character depth. One of my gripes with the story mode though is that just like a regular sports anime there’s a lot of dialogue which while good for character development is also something that I just want to end because the gameplay is so good that I just want to get to the match already so I love it and hate it at the same time. After finishing a game or coming across a new character one can unlock extras like movies that show the origins of the characters in the original Captain Tsubasa anime/manga which is great for those who want to know more about the characters and have no knowledge of the series. Tsubasa’s story is about the road to him and his team going for their 3rd national championship in a row and is filled with a lot of anime tropes like when after defeating their rivals they come back in their next game to cheer them on which tends to get annoying following the same formula.

One thing I love about the game’s story mode is that during the matches if you do something very specific a cutscene will play out which can’t get any more anime in my own opinion and it’s honestly just so cool and it adds some drama and epicness to the current game. The characters would do some amazing things that one can usually only see in anime however some of them do lead to the enemy scoring over you which you might need to be careful of but seeing the absurdity of the moves is usually worth it so it’ll probably depend on the person playing if they’re bothered by it or not. Sometimes though you will need specific characters and I believe they even need to be in specific positions in the field to trigger some of these special cutscenes.

Then we have the new hero story wherein you get to create your own character and see how his story unfolds. The character creation is very in line with the art style so you can make your character look as silly as any other character in the series of even sillier. After you’re set on your character’s looks you get to pick which school you get to play for and each one offers a different story which makes the new hero storyline more replayable and even more so since the ending can be different based on a choice you make later on in the story. Now while replaying the story albeit with a different start may seem like a chore there is at least the option wherein you can skip cutscenes you’ve already seen which makes things easier and more palatable in my opinion. There’s also the fact that the characters you make will improve per game and in the end, you can use your fully developed characters for competitive play in the other game modes which makes this particular story mode much more rewarding. The bad part is that if you’re not satisfied with how your character developed in 1 match then you have to redo everything all the way from the start which is enough to easily make one be put off with the game which while understandable is a shame considering how fun the game actually is.

While playing the game online you can earn play points which you can use for customization for your online teams or buy card packs which are used for story mode which can help your character develop or improve their stats for just 1 match. So in this sense, the things you do in multiplayer are very beneficial to your character’s development in the story mode which you can then eventually use in multiplayer and the cycle repeats all over again. So to get a great player one must earn it through a systematic form of repetition instead of other games wherein you can just easily make an overpowered character on the fly and the best part is that there are no microtransactions involved at the time of writing at least.

While I may not be interested in football/soccer mainly because of how slow scoring is in actuality when compared to a game of basketball, this particular anime-based sports video game is certainly a much more fun form of football/soccer than I would’ve ever given it credit for had I never played it let alone look at the gameplay of it. While I did enjoy my time with FIFA 18 before (mainly for the very good story mode) I have never been as impressed with a football/soccer videogame as I have with Captain Tsubasa: Rise of New Champions.

Bandai Namco has always been known for their anime games but this is the first time I have ever played let alone heard of them publishing a sports anime videogame and while Captain Tsubasa: Rise of New Champions may not be perfect it is probably a great stepping stone for them to do more sports anime videogames. Bandai Namco and developer Tamsoft actually makes me wish for them to eventually create a Haikyuu!! or even Kuroko no Basket video game which I’m sure I will love and even more so if they ever do a Slam Dunk video game. 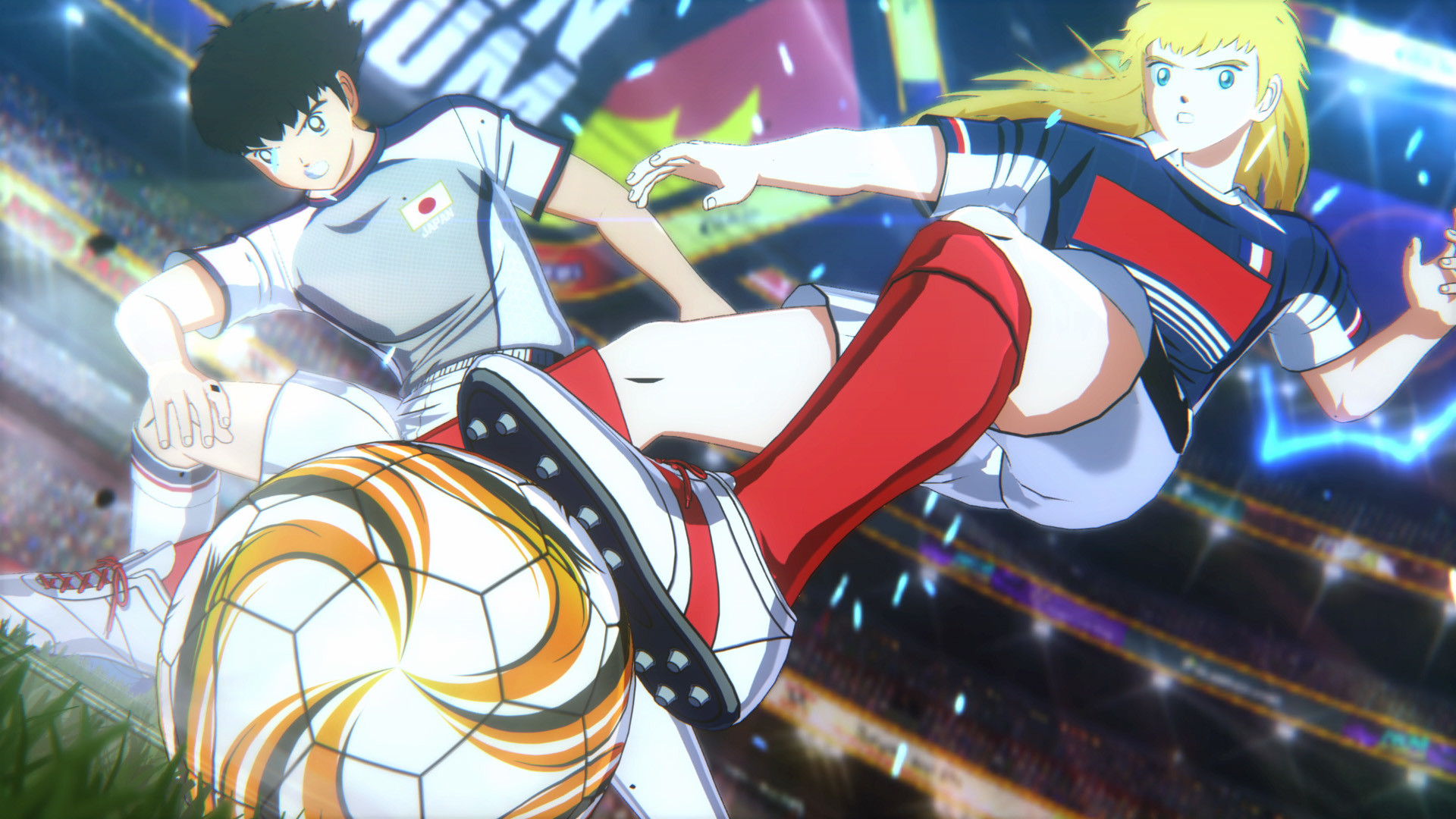 Captain Tsubasa: Rise of Champions – Review
Score Definition
When the issues of a game are rolled and stomped by its greatness, then it’s something to invest on if you have some spare.
Pros
Epic Anime Moves and In-Match Cutscenes
In-Depth Story Modes
Rewarding New Character Development
Deep Gameplay Systems that Rewards Experimentation
Cons
Unrealistic Tackles
8.5
Great