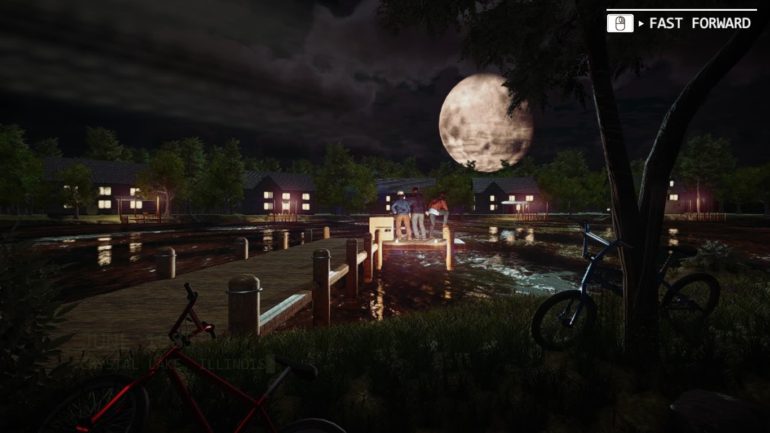 Just when you thought we’ve hit the peak of 80’s inspired games, another new game hits the scene chock-full of period-appropriate references and further solidifying the image of a youth growing up in that era. Commander ’85 is a sci-fi thriller that revolves around the titular PC unit and its human host.

The beginning of the demo is set at a location called ‘Crystal Lake’ (no relation to any slasher flicks… I hope.) A bunch of kids drop a box containing the Commander ’85 unit into the lake. The scene then transitions to a crime scene sometime in 1984. The crime’s been classified as a suicide, and we see nothing more until we see the protagonist ride his bike back home. Oddly enough, we also see a suspicious white van moving in the background. (Definitely a coincidence. Yeah, sure.)

Back at home, the protagonist makes a beeline towards his room, just before getting an earful from his mother. Apparently, our character’s been skipping classes, and the teachers saw fit to inform his mother. She warns him that if he doesn’t start getting his act together, she’s going to break the computer. It is at this point that the Commander speaks up about not wanting to be destroyed. It is somehow fully aware. Oddly enough, the young man’s cool with it too. (Well, it’s not like the character reacts to anything… unless he’s sleepy.)

The first thing anyone’s going to notice is the fact that we don’t have the ability to freely move around. Surprise! It’s a point and click movement system. We are able to move several points in the room, particularly the cabinet, a window sill, the T.V. But the central hub is the desktop where the computer lies. For a demo, there is a surprising amount of things that we can interact with. Most of it seems like filler stuff at the moment. Though there is a walkie-talkie in one of the drawers that when tuned in the right frequency intercepts a conversation between surveillance teams. Might be something, might be nothing, who knows?

Soon after, the Commander suggests that we hack into our school to manipulate the attendance records to suit our needs. After booting up the PC and inputting a preferred name, it’s time to connect the telephone to the modem. (God, I remember doing this. I’m really feeling my age now.) The next step involves inputting the right commands to connect with the school’s servers. It goes roughly like this:

The number’s written on the top left corner of your school ID – which is inside your top drawer. The neat thing here is that you don’t need face the computer while looking up the number. Like in real life, you can look at a piece of paper while typing in the numbers. It doesn’t show up clearly on the screen, but that’s because of how small everything looks like through another screen.

Now, this the part where stuff gets serious. The game now asks you to hack into the servers. To do this, we either break the code ourselves or we allocate enough resources to allow the Commander to the break the code for us. Curious, I tried to break the password myself. I was kind of happy to know that the password is a simple shift place algorithm… the problem is… I have no idea where to start looking. It sounds simple enough, but really I didn’t have the patience to deduce the likely answer. So, I decided to take the second option and brute force my way using the computer’s processing power.

The brute force method involves using 1 of 5 processes to break the code. We can actually allot more processes by turning off more process, saving more time in the long run. During multiple playthroughs, the timer can go as low as 30 seconds. Entering commands in this manner is quite tedious at first, but it doesn’t take long to get into a groove of sorts and start typing in commands like you actually know what you’re doing.

Just as we are finishing the final touches to the hack, a virus attacks the Commander. The deeper, more sinister synthetic voice uses our unit to hack into the U.S. and Russia military servers with the intent of launching nukes into either side. It’s your typical homicidal computer program that sees us humans for what we really are, and has deemed us beyond saving.

During the reboot sequence, Commander notes that the only way to beat him is to challenge him to a game and win. Time’s at the essence here. For one thing, if your character stays up late, his mom’s going to get angry. An anger meter shows up at the top left corner of the screen but does not do anything at this time. Except loop the same ticked off lines over and over again. Secondly, if the character stays up for too long, he starts to fall victim to sleeplessness. His vision doubles to the point that the game’s start to look fuzzy.

If the player cannot beat the virus at one game, and goes to sleep as asked, a nuclear strike on the city is what we see next. The last thing we see is the mushroom cloud taking shape as the blast finally envelopes our home. The end.

I’ve only ever finished the demo with the one ending. Though I suspect there are multiple endings seeing as there are multiple ‘trophy/action figures on the shelf symbolizing a potential ending. For the better part of an hour, I’ve tried to beat the computer at a Frogger clone game, but I just couldn’t beat it. With a little more patience, maybe. I was always looking for other potential endings.. including one with an Ouija board. (YOU KNOW WHERE THIS IS COMING FROM.) No dice. I was done after my 4th try. All the while reading the instruction manual cover to cover for any loop hopes to exploit.

What stuck with me is the 80’s synthetic music. It doesn’t dominate the atmosphere like some other games, so there’s a point there. The sound effects are really good for a demo. Another thing going for it.

The graphics are ok. The models don’t have much life to them. With that being said, I appreciate how much work the team put in with regards to the animations. Detail-wise, they don’t really stand out much. You can play this game with others in the same style, and there’s a chance you might confuse one with the other. That’s assuming that the game doesn’t change within the span of a few months. Just want to take note of that. Still, the texture work is more on the detailed side. I hope that they clean up some of the code that applies the picking up and setting down of objects.

Interesting interactions involve the boombox, that requires the setting of the right frequencies via knobs. The coloring book with it’s mildly entertaining distractions. Maybe that’s something to do with you’re waiting for nukes to drop. I certainly did that.

All-in-all I see potential with the title. It wears its sci-fi inspiration on its sleeves. Buyer beware though. If you do not mind taking the time to manually input commands, you’ll be having fun in no time. All I’m saying is that the gameplay’s not to everyone’s liking. Let’s leave it at that. Still the story’s got some weight to it, and there’s always the potential of more hidden endings that seems to be all the rage lately.

Commander ’85 is set to release later this year.