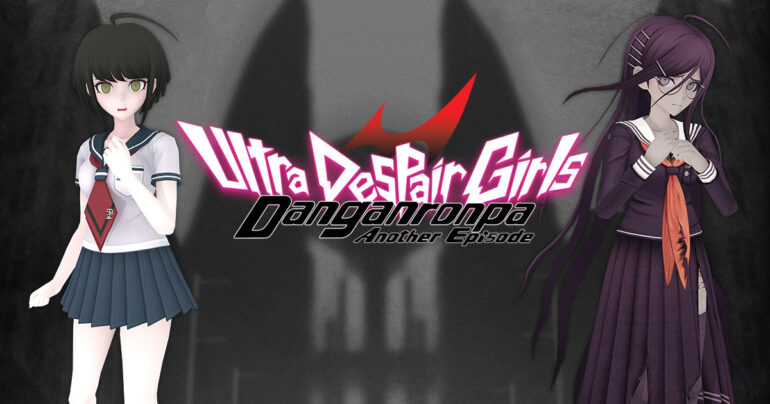 What happens when you put in a very very normal girl in a situation where they become helpless and out of place. A game that turns a very hopeless and hapless girl into the blooming heroine of the story. A story about hope and despair and the fine line in between. That’s what Danganronpa Another Episode: Ultra Despair Girls gives us. The game takes place in a time between the first game and the Danganronpa Season 3 -Despair Arc anime. Although you can go into this game not having seen the anime or played any of the games, it will make every reference more understandable if you have. The heroine of this story is Komaru Naegi, sister to the protagonist of the first game. The premise takes us to a room where Komaru seems to have been spending her time for quite awhile. It also seems this is not of her free will. Like she was kidnapped and trapped in this room. Day in and day out Komaru goes about her business, waking up, eating breakfast, lunch and dinner, reminiscing by the barred window and going back to sleep. This has been a routine for her everyday but then something unusual happens.

One fine day, someone comes knocking at her door. She had no idea who it might be because no one has ever interacted with her this past two years. When she went to answer the door what greeted her was a homicidal bear robot, ready to slice and dice her. Our helpless heroine felt hopeless and thought she was gonna die on the hands of a raging robot bear. But then rescue comes for her in the form of men in black. She was confused and didn’t really understand what’s going on. But then this man wearing glasses told her that they were there to rescue her. She was thankful but still not sure if she would trust these strangers. The man gave her this megaphone gun that he dubbed as the Hacking Gun. A special weapon that can help her fight against the raging bears which were called Monokumas. 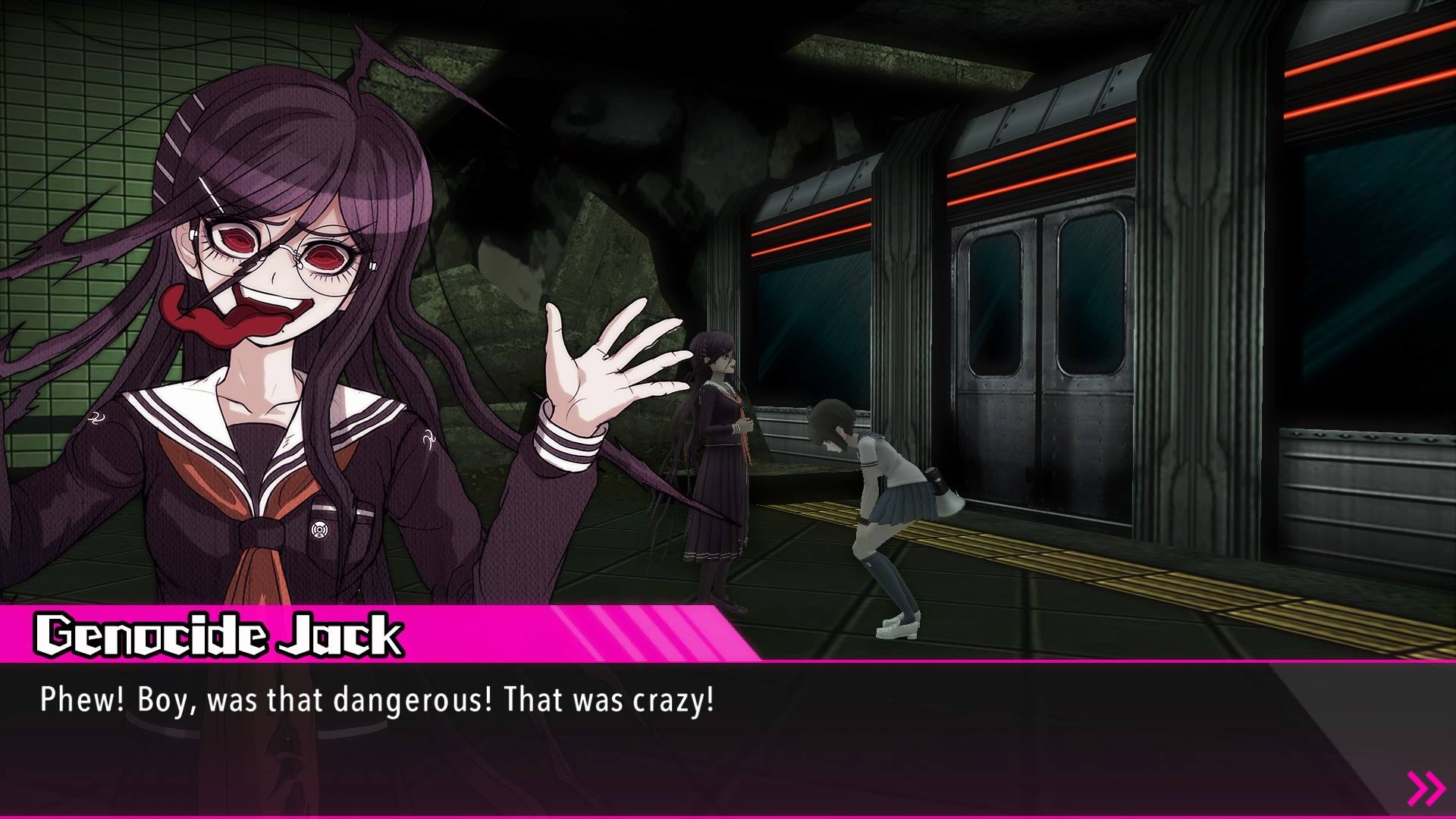 Despite the cutesy art and the pink depiction of blood, this game is far from anything but cute. It’s a dark and sinister game about murderous kids who wants to get rid of all the adults. A game where everywhere you walk you see dead bodies lying about. I can only imagine how they would actually look like because the game opted to make the NPCs faceless. I understand why they had to do this though to not make this game more mature than it already is. The main characters and the important people in the game though have faces so it’s not like everyone is faceless.

Now let’s talk about the gameplay. The game plays differently from previous Danganronpa games. Danganronpa games were well known for its visual novel style mixed with some QTE sequences. This game on the other hand, is a full-on action RPG with weapons and skills. You take control of Komaru as she fights off enemies with the Hacking Gun. Along the way, she meets up with Toko who was part of the first game. She has a split personality named Genocide Jack, a scissor-wielding serial killer who will slice and dice the monokumas that gets in her way. These two girls stand out beautifully in the game as they complement each other with their own strengths and weaknesses.

Let’s talk about Komaru first, the Hacking Gun toting heroine. The Hacking Gun that Komaru uses has eight distinct bullets called Truth Bullets. Firing these at the enemies have different effects. We have the Break Bullet that simply damages the enemies when it hits them. Firing them at a monokuma’s red eye will trigger a special that will make your next Break Bullet more powerful and will land a critical hit. The Move Bullet allows you to move cars, arcade machines and toy ball machines. The Detect Bullet scans invisible paint on walls and shiny areas which will reveal images of the Warriors of Hope that you can collect. 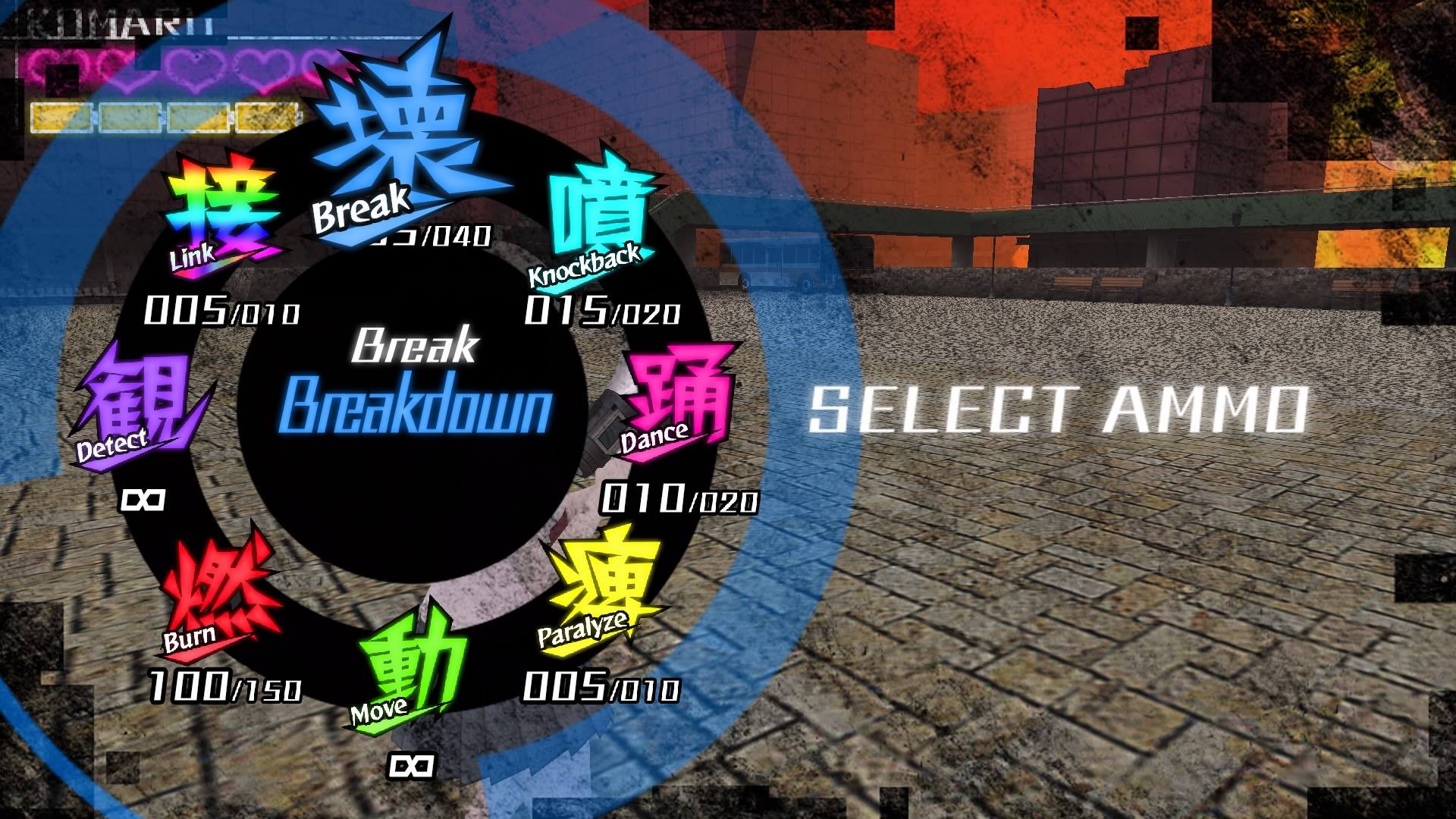 The Dance Bullet stuns the enemy for a few seconds making them dance adorably infront of you. Firing the Dance Bullet at a Siren Monokuma will make all the other enemies in the vicinity come running towards him. The Knockback Bullet knocks enemies off their feet and is very useful against Monokumas that have shields up. The Paralyze Bullet when fired will stun and kill an enemy and anyone else in its radius. It can also be effectively used against enemies who are standing on a puddle of water. Everyone who are standing on the puddle of water no matter how far they are from the enemy you targeted dies a well.

The Fire Bullet can be shot in rapid succession making it effective against speed type enemies stopping them at their tracks. And lastly we have the Link Bullet which allows you to control the enemy for a few seconds. This is actually the only bullet that makes this gun a true Hacking Gun.

With all these bullets in tow, Komaru becomes a true heroine and makes her not so helpless in the game. Komaru who started from not knowing what’s going on became someone who fights for hope and justice. A true heroine on her own right and seeing her grow in the game makes you admire her for what she’s done.

Toko on the other hand, a straight up killing machine when she transforms into Genocide Jack. You can only transform for a limited time though as this is dependent on the battery gauge. You see, the way that Toko transforms into Genocide Jack is that she stuns herself with a stun gun. This brings about her other personality, the one that kills everything in her path. A meek and humble writer who you least expect to be the badass of the game.  Although she does not get to use the Hacking Gun, Toko has all the skills and abilities she needs to survive in the game. She essentially becomes someone who can save you in a pinch if the Hacking Gun does not “hack” it. 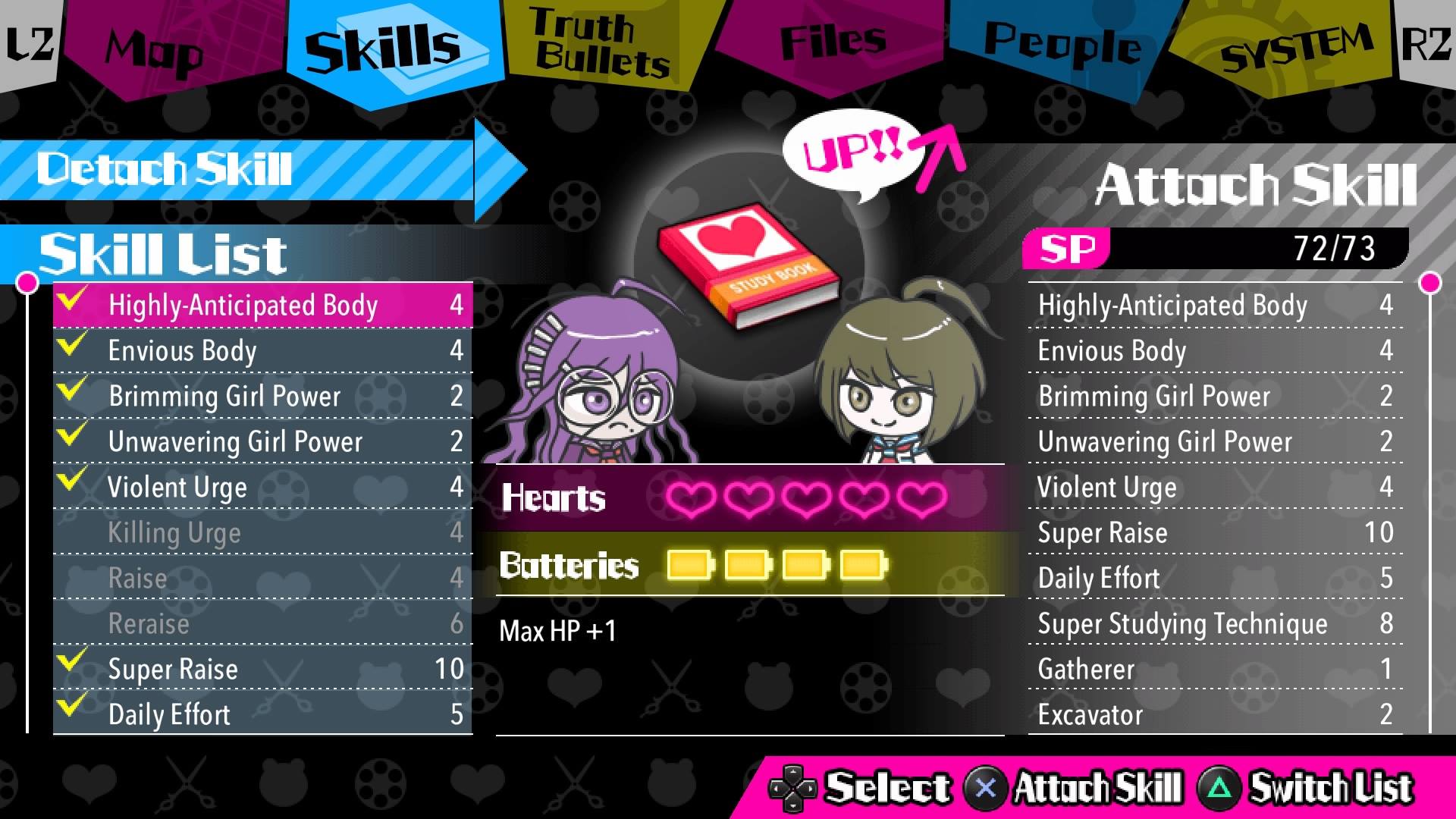 Other elements of the game include the arcade machine simulation where you are forced to solve puzzles that will unlock the path before you. Boss battles with the Warriors of Hope each with a distinct battle style. So you will have to think on your feet and use your Hacking Gun effectively to defeat these enemies. There are also challenges presented to you in game  and that if you complete them you get rewarded with special items like skills that will help you in the fight against the Monokumas. There is also a shop where you can buy add-ons for the hacking gun and upgrade skills for Toko.

There are five chapters in the game and in each chapter you will be graded according to certain things. Like how many arcade machines you completed by successfully killing the enemies in one shot. Or how many warriors of hope images you have uncovered. The higher the grade you get when the chapter ends, the better the rewards you get. These include skills and monocoins which is the currency in the game.

Though the graphics is dated, the game makes it up with its intriguing storyline. The twists and turns this game gives is very captivating and entertaining. The tandem that Komaru and Toko brings to the table is so endearing and interesting. They have their usual banter that is funny and amusing. The really jive well with each other. Though Komaru starts being annoying at first, Toko is quick to point this out and complains about it. She becomes our inner voice that voices what we see in the game. She tells us what we’ve been meaning to criticize about the game. I like her take on this world and I like how she just doesn’t hold back in what she wants to say. She’s also a pervert but a very endearing one. They are a perfect pair and the perfect characters for this game. They have enough charisma and personality to fill up the entire game and that’s just what we need here. 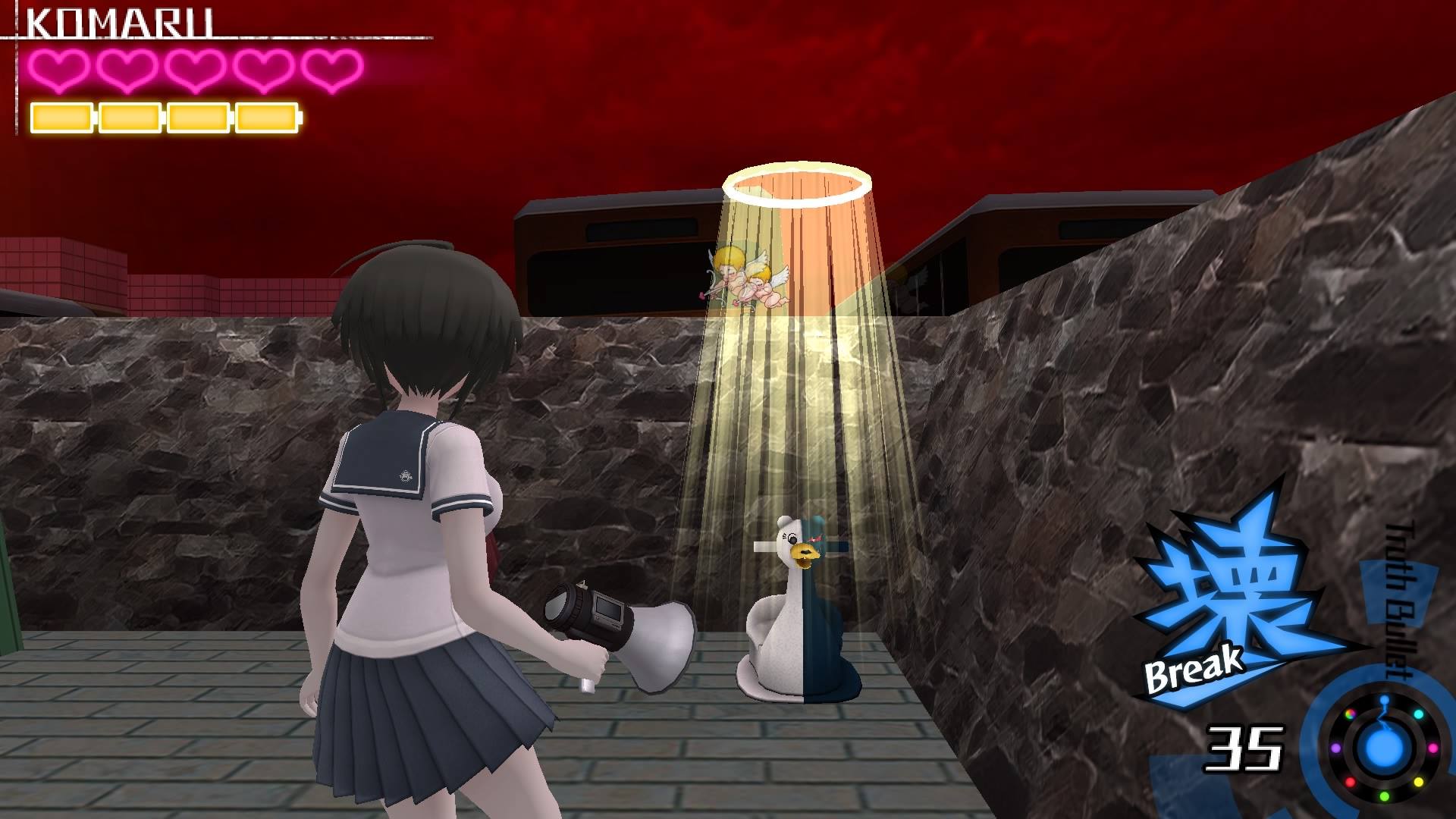 The soundtrack is on point. I love the tense moments as the background music really puts you on the spot. There were even instances in the game where you are trapped in this dark building. The atmosphere just becomes more creepier with the accompanying background. The game becomes a roller coaster of emotions because of how they aptly use the music.

I truly believe this is an underrated game and I feel like not a lot of people will understand what its underlying message is. It’s a game about not giving up. Not giving into despair. Being just and distinguishing between true justice and mercy. A game about second chances and about growing up. A game that instills values and that there is always another way even when you are faced with a difficult choice. I recommend this game to those of you that find story is a great deal of importance but will also welcome a nice and challenging game.

Danganronpa Another Episode: Ultra Despair Girls - Review
Score Definition
When the issues of a game are rolled and stomped by its greatness, then it’s something to invest on if you have some spare.
Pros
Great and meaningful story
Best duo team
Hacking Gun
Beautiful Soundtrack
Cons
Outdated graphics
Can't dodge
No Jumping
8.8
Great