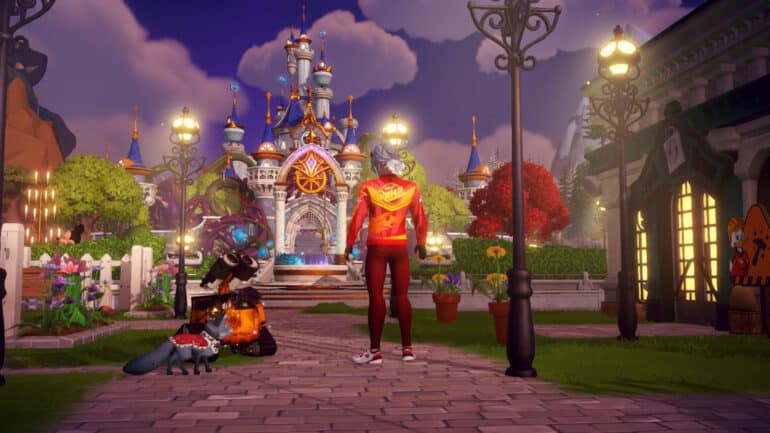 Disney Dreamlight Valley is the newest single-player adventure and simulation game that lets players live among famous and well-loved Disney characters. The game is developed by Gameloft and it can be played on PC, on both previous and current gens of Playstation and Xbox, as well as on the Nintendo Switch. We got to play the game through an early access copy generously provided to us by the publishers, and here are my thoughts about the game.

Before we dive in to the nitty-gritty of this review, I’d like to give a little summary of the premise of Disney Dreamlight Valley.

You start off with your character, coming back to a familiar childhood place: a play area that has now been overgrown by plants and at disarray through years of inactivity. You suddenly find yourself transported into Dreamlight Valley and meet Merlin, a famous magician from the Arthurian legend, but in our case, he is the famous wizard from the movie The Sword in the Stone. He gets you up to speed to what has happened in the Valley, but he himself has been a victim to The Forgetting, a curse that has afflicted the land ever since the Ruler left the kingdom, and thus has made everyone forgetful. It is up to you now to help rebuild the village and find out what caused this curse to put a stop to it once and for all.

Starting off with the visuals, Disney Dreamlight Valley has done great with presenting the world and its characters. The world is bright and lively when Dark Magic has been dispelled from an area, while it is gloomy and sometimes creepy in areas that are still cursed by the thorns. The character models are as close as what you can get with the level of graphics and they do not look out of place against the scenery. It’s no Unreal Engine-tier of graphics, but there’s enough fidelity and graphics quality to convey the magic and wonder of the Valley.

The audio is what adds to the magical experience while playing the game. The default background music are instrumental versions of popular Disney songs that you can hum along to when they start playing. There’s also an option to switch to non-copyrighted music for players who want to stream or record gameplay or post on video streaming sites. The only complaint that I found about the background music is that the playlist is too short and it could use more songs added to it. There’s also some spoken dialogue by the characters, but they’re just short phrases which then get replaced by generic mumbles and grunts.

As for the characters and their AI, this is where the game gets bonus points for doing it right. Characters can roam around Dreamlight Valley as long as the area has been unlocked, and you can often find them doing different kinds of stuff like fishing, chilling at the beach, and just enjoying every moment that they spend in the valley. You can also sometimes find them interacting with each other and you can “listen” to their short conversations as if they are actually having a meaningful talk. These minor things are what makes the game feel a bit more lively, especially once you get to unlock all the available characters in the game.

The entire gameplay of Disney Dreamlight Valley is similar to most simulation games that have existed; nothing new or innovative was added into it. You basically have to work the land and complete quests to unlock more land and resources, which you can use to craft or cook more stuff. There’s also the side quest of unlocking more characters and leveling up your friendship with them to unlock more stuff. There’s a bit of crafting involved, but the crafting tree is just shallow; around three crafting levels deep from what we’ve seen so far.

The story is paced based on how and when the player would want to proceed. The main quest can be put on the back burner so that you can still create meaningful interactions with the current denizens of the Valley and max out their friendship levels. You will have to progress for the sake of getting new materials, or meeting new friends, or just simply get a tool upgrade to open up a shortcut and avoid taking the long route every time. Despite this, players have a choice to keep things as they are without getting too much pressure of progressing.

There’s an energy meter present in the game, but it can be replenished indefinitely without much effort. The game’s time is based on real time which means a day in the game also takes 24 hours. Almost all resources get replenished in just mere minutes, except for Night Thorns which respawn by midnight. The impactful character interactions are also limited to once a day. Generally speaking, the game is sort of time-locked in a way based on some of those things that were mentioned, but players can grind for almost everything to their hearts content.

Lastly, the gameplay boils down to collecting cosmetics for both the players’ characters and their houses and lands. The game promises that there will be thousands of cosmetic items that can be collected in the game, with more to come in future updates. There are some exclusive cosmetics that can only be obtained from special events and founder’s editions; the latter can be purchased with real money and provides additional currency called Moonstones that can be used to purchase items for the former.

We have yet to see if there is a way to purchase these Moonstones on their own, although they can be earned in small amounts just by doing some in-game quests. But given that Disney Dreamlight Valley will be released as a free-to-play game, it’s just expected that the game will adapt the microtransaction business model for these cosmetics. Thankfully, it seems that there won’t be any gacha mechanics involved, at least that was what we saw in the early access release.

Just to slip this in, I did not experience any game breaking bugs or glitches that prevented me from playing and enjoying the game. Yes, there were some visual glitches occasionally, but they were just minor ones that fix themselves after a second.

Although the game was intended to be made for kids and young teens due to how colorful and simple the gameplay mechanics are, I believe that Disney Dreamlight Valley is also targeted for young adults and older audiences. Just from the premise of the game alone, it’s obvious that the game is also telling the story of a grown-up that has rediscovered their childhood fantasies of playing with their beloved characters. It’s kinda like Toy Story all over again, but we’re seeing things in a post-college Andy’s perspective.

Simulation games have quite huge player bases which rose quite drastically during the recent events when people were yearning to do outdoor stuff but can’t. Although Disney Dreamlight Valley may feel like it is just riding the tail end of the simulation game hype wave, I believe that it’s a game that still has the potential to keep an active player base for years to come. The game won’t have a hard time enticing and keeping Disney fans, especially if the game gets constantly updated with new content on a timely manner. Not to mention that the devs are planning on an update to add the multiplayer feature, which will surely be a hit with players who want to hang out with their pals.

Based from my experience, although I’m not really a huge fan of Disney, playing the game still gave me genuine delight; it came to a point that I had to decide to close the game despite wanting to play more just so that I can start writing on some guides. What I am a huge fan of are simulation games, and the fact that I get to interact with familiar characters from my childhood and build a nice and cozy place with them was what made the experience great.

Disney Dreamlight Valley – Review
Score Definition
It may not be GotY material, but it can definitely be a game where players can find themselves pouring dozens or even hundreds of hours into.
Pros
Visually appealing
Gender inclusive cosmetics
Create your own Disneyland
Hanging out with WALL-E
Not graphically demanding
Free to play
Cons
Not enough Disney songs
Can be too grindy at times
Very minor visual glitches
8
Great