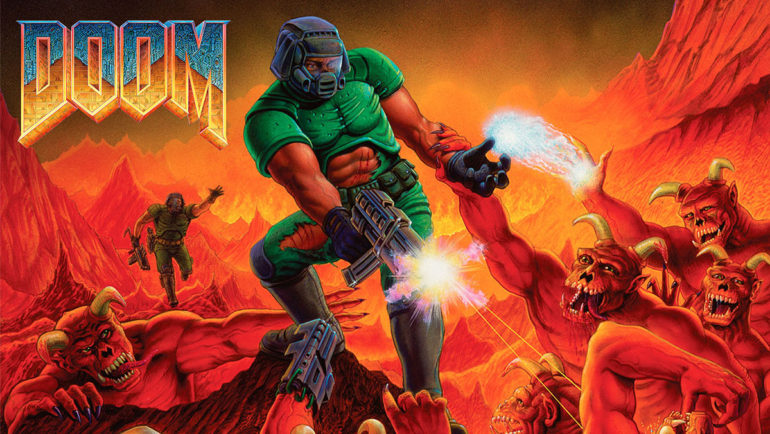 Game company Bethesda recently revealed that Doom and Doom 2 got new updates that will introduce new support for the game.

With the new update, the two games can now support widescreen resolutions. All new 16:9 versions of the titlescreen, intermission, and ending screens have been added. The add-ons have also been modified for widescreen support.

The update added Steam support for those gamers who already own either The Ultimate Doom or Doom II: Hell On Earth on Steam. They will automatically receive the new re-releases in their libraries. The original DOS versions are still available as a separate launch option from within Steam. The original DOS IWAD files are in their original location on disk.

Steam owns will have to be careful though because if they have modified the files in the Steam install folder directly, those files might get overwritten.

Here are the rest of the patch notes:

• DeHackEd support
The engine now can load DeHackEd patches, a popular tool for the original release that modified the game in order to support more advanced behavior. Add-Ons can now use new weapons, change enemy behavior, and more!
• Deathmatch 3.0 in split-screen multiplayer
Split screen deathmatch has been changed to what is commonly known in the community as “Deathmatch 3.0.” Weapons will stay in the world after being picked up in order to account for the extreme lethality of DOOM’s weapons, and the weakness of the starting pistol, while all items and ammo respawn on a 30 second timer. Invulnerability and Invisibility will never respawn after being picked up for the first time.
• Added optional crosshair
A crosshair, which can be disabled in Gameplay Options, will also change colors when targeting an enemy. This means less guessing if firing a rocket is going to aim at the enemy above you, or fire directly into your face, bringing about an untimely death. Enabling the crosshair may also help reduce motion sickness by giving you a fixed point to focus on.
• PC/Switch/PS4: Added Gyro Aim
Gyro Aim, enabled by default, allows you to look left and right by either turning the controller, or rolling the controller left or right. This allows for an additional amount of precision by enabling fine corrections to turning in order to track moving enemies, while still using the right analog stick for large turning movements. Gyro Aim can be set to either use the controller’s yaw, or pitch, or disabled entirely, along with a separate sensitivity slider. Please note: On the PC version, Gyro Aiming is only supported when using a DualShock 4 controller.
• iOS: New touch controls
A new, more precise touch control scheme has been implemented. The previous system that required gestures and double tapping has been changed in favor of onscreen buttons. Looking around while holding down the fire button lets you track enemies and fire during protracted encounters, while momentum on turning has been disabled for better precision and more predictable turns. A fire button has been added to both sides of the screen allowing you to better react to being unexpectedly hit from behind.
• iOS: Added controller support
If touch controls aren’t your thing, we now support MFi controllers fully. PS4 and Xbox One controllers that are supported by iOS 13 will also now work for input and have the same controller mappings as all the other platforms.
• Android/iOS/PC: Added FPS Limiter
On iOS, 30, 60, and 120FPS has been added for devices that have 120hz refresh rate screens. On Android, 30, 60, 90 and 120FPS are available. Finally on PC, you can set it to 30, 60, 120, 144, 165, 240, and unlimited FPS.
• Added millisecond accurate timer
A millisecond accurate timer has been added to the minimap, and to the end of level intermission, for anyone looking to speedrun levels.
• PC: Keyboard entry of cheat codes
iddqd, idkfa, idclip, and all of their friends can now be entered from the keyboard, in addition to the Cheats menu, as in the original 1993 release.
• Added secret area notification
A message and notification is now displayed when you enter into a secret area for the first time.
• Added Ultra-Violence+ Skill Level
Ultra-Violence+ is a twist on our existing Ultra-Violence skill level. Deathmatch/Co-op only weapons will spawn in, and enemies are fast like in Nightmare mode. In DOOM II, this means you get the BFG and Rocket Launcher right from the start, but in Final DOOM: Plutonia you’ll have a Spider Mastermind staring you down as soon as you spawn in on the first level. It cuts both ways.
• BTSX Episode 1 and Episode 2 are now available in both games
Previously available for DOOM II, both parts of this amazing community Add-On set are now available for owners of either title.

• Restored original attract loop to the original 1993 release. The original title screen and credits screen are now visible between demo playback.
• Restored cut message from the original 1993 release when picking up a medkit, while having with less than 25 health.
• Restored cut “ouch face” from the original 1993 release for when a lot of damage is taken in a single hit.
• Intermission screen is now shown after boss levels, instead of cutting immediately to the ending screens in order to see level completion stats and time. Par times have been added to E1M8, E2M8, and E3M8.
• Random SFX pitch is now disabled for chainsaw sounds to allow for better looping. Random pitch variation has been reduced for other sounds.
• Pickup sounds and player voices will no longer interrupt weapon firing sounds.
• PS4/XB1/PC: VSync option in Video Settings to minimize input latency, at the cost of potential screen tearing.
• Add-Ons will now use their intended custom graphics during intermission and level loading screens.
• Latest Add-Ons appear on the top of the Downloaded list.