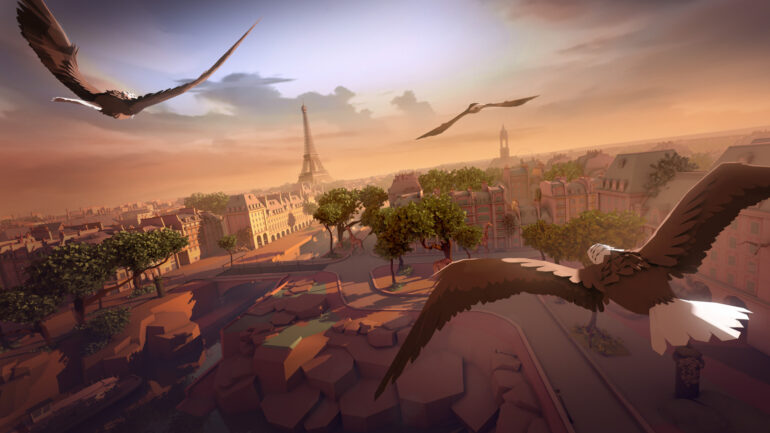 “Spread your wings and fly, [Eagles] be with you.” — it’s a modified quote from Metal Gear Solid 3: Snake Eater. Ubisoft Montreal has taken the VR-platform like most of AAA developers like Rebellion (Battlezone), Crytek (Robinson), and Guerilla Games (RIGS). Eagle Flight may not be look like a Triple-A game visually, it also offers a few things to do in-game.

Fly and fly, and let’s see if Eagle Flight can live up to its name without crashing. 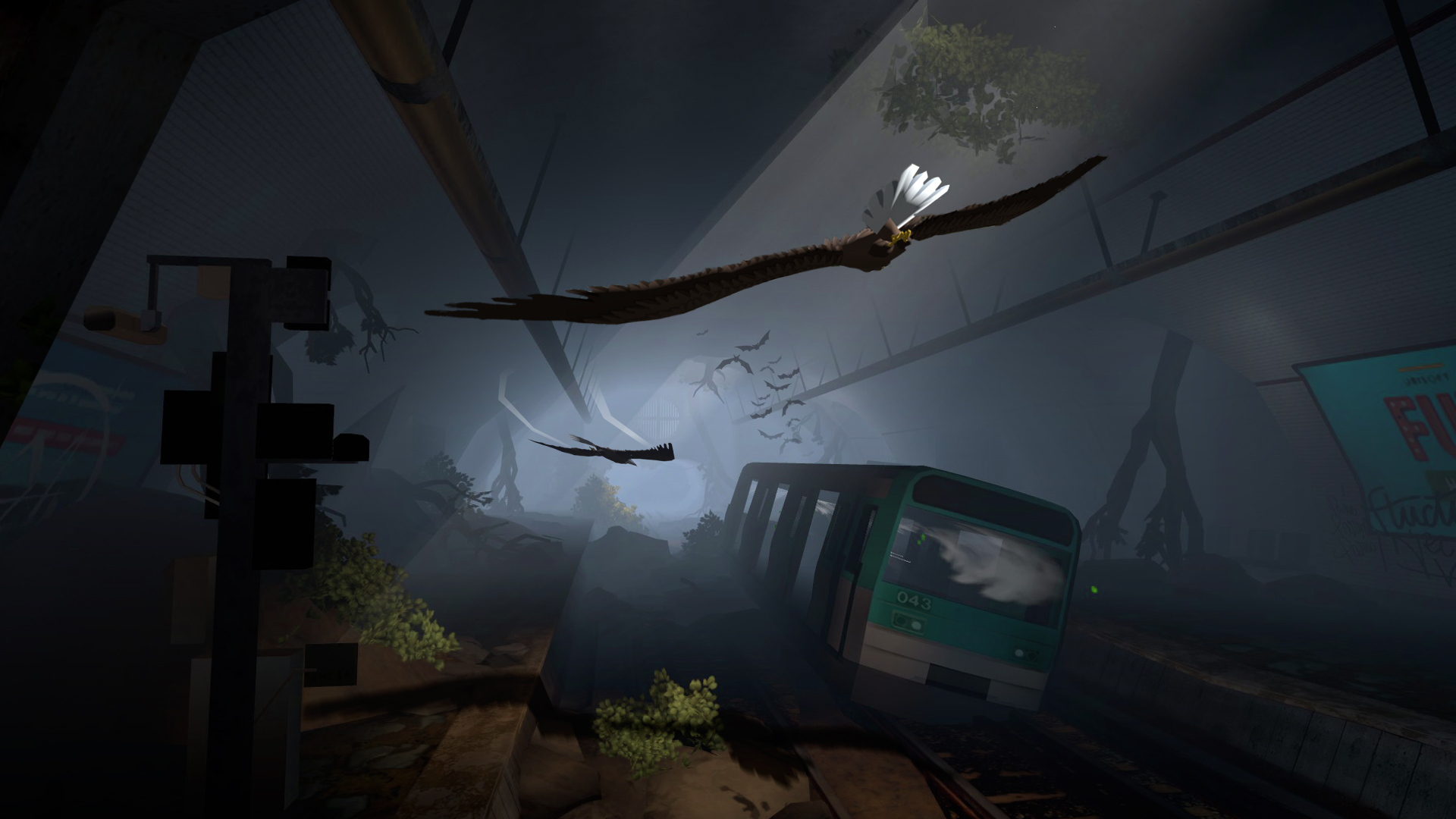 You start off with a cinematic intro that shows you’re immerging from an egg then you see your Eagle parents in a first-person view. Then the screens fades to black, and proceeds to the tutorial. As you fly over what is called the city of Paris in your first flight with your mom and dad Eagle, you’ll notice that Paris are in ruins and deserted; it’s a setting where humans have abandoned the world for quite some time.

Eagle Flight is an open-world free-flight title with an arcadey feel. You fly through emblems (stages/missions) scattered all around in Paris which will inevitably be unlocked after you complete each challenge course. Every challenge course has its own difficulty level and they are not as unforgiving as you may think. Once you’ve finished a certain level, may it be 1 or 3 stars, as long as you finish the course, then you’re good to proceed to another level. 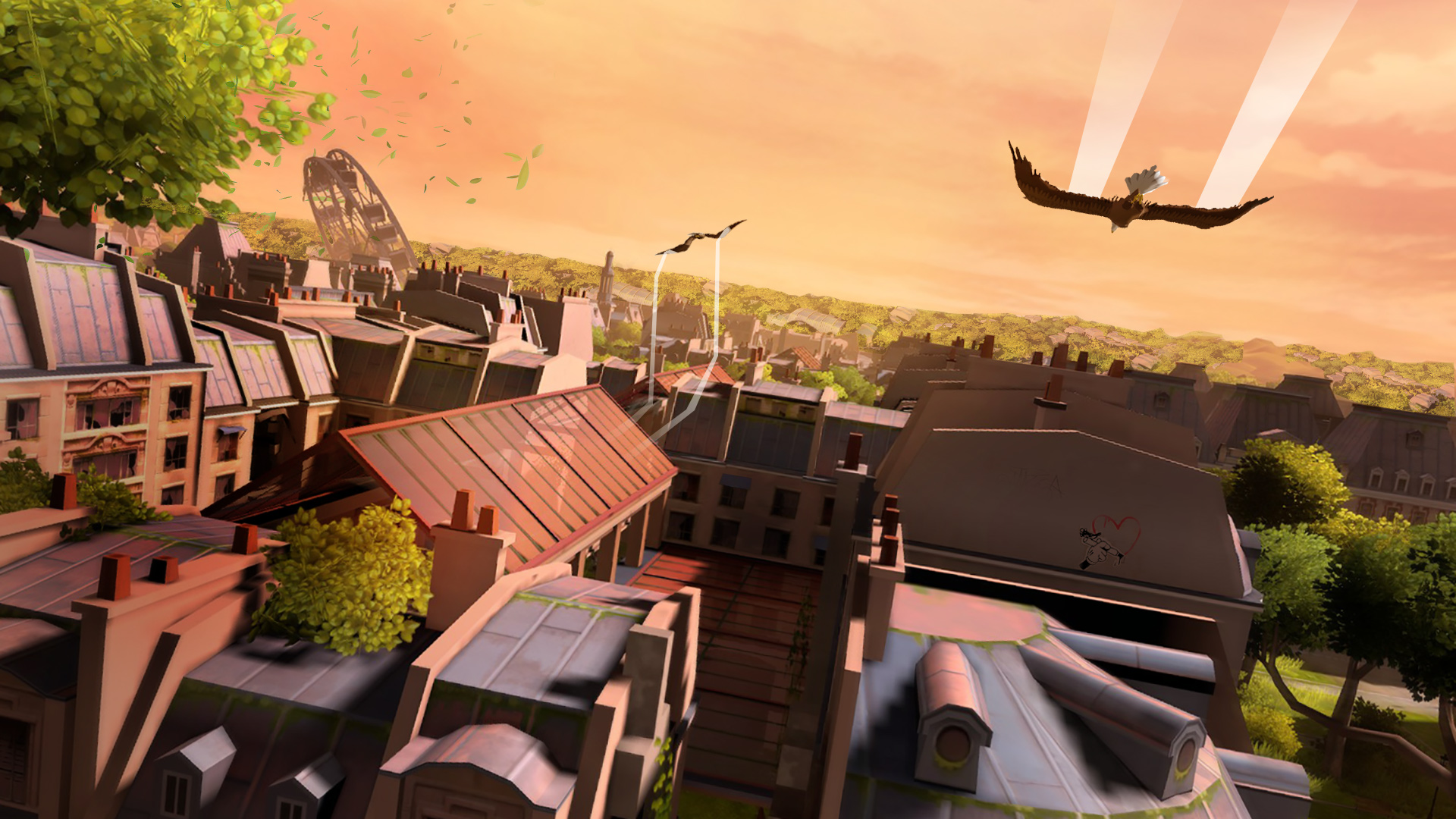 Others would think this is fairly easy and convenient in most parts of the game, but you can go back to these levels if you want to turn the difficulty higher and knock players in the leaderboards down. It gives you a breather from going through stages straight when you just want to do sightseeing. The speed-run gameplay is enjoyable at best. It gets exhilarating and exciting when you go through small gaps in full speed with the fear of hitting a wall. After all of the stages though, there’s nothing much to do apparently.

There are also simple side-quests while you’re wandering around the city that is filled with giraffes, elephants, and other animals. These so-called side-quests in free-roaming mode are collecting feathers or fishing. Yes, you do fishing like an eagle. But it didn’t peak my interest to go through the hassle of getting them as I don’t sense any rewards from doing it.

Controls are easy to get a grasp on, but it can also leave you some muscle strains if you’re trying to sway your head with style. I do this, so don’t judge. I love how smooth the sensitivity of the headset and its tracking. You tilt your head to turn at directions, then you have your DualShock 4 to control your speed.

The feeling of soaring up high in the sky can be an immersive experience; and if only the VR-headset had some little-vibration mechanisms that would turn on when you dive from the sky, it would be a whole new level of an experience as you can definitely feel the intensity – sadly VR headsets doesn’t have this feature. 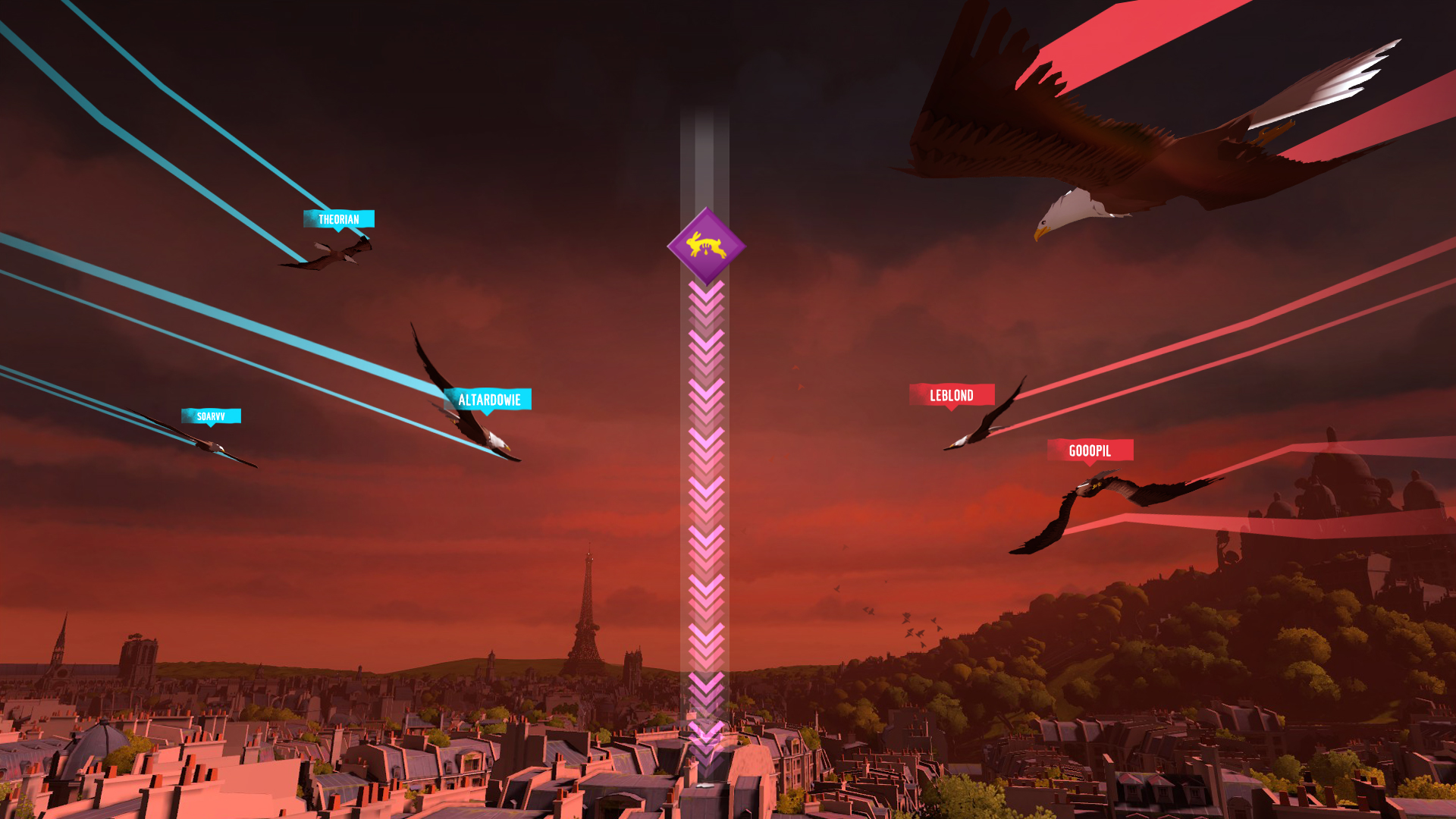 Multiplayer has only one mode: capture-the-prey. Don’t overthink the word “prey” as it works similarly to what you know as Capture-the-Flag in most multiplayer games. You simply team up with 2 other players go up against 3 other players. Capture-the-prey can be engaging at the first few playthroughs, it gives out the satisfying effect when your team wins, but it’s not enough to push it forward to make me stay to play Eagle Flight again in the future.

Eagle Flight has achieved what some other VR games couldn’t, and that’s fluidness of its gameplay and experience. I didn’t experience motion sickness, fortunately. Looting for feathers and fishes can be reasons to get back into the wings of an eagle, but it’s not enough to make replayability last.