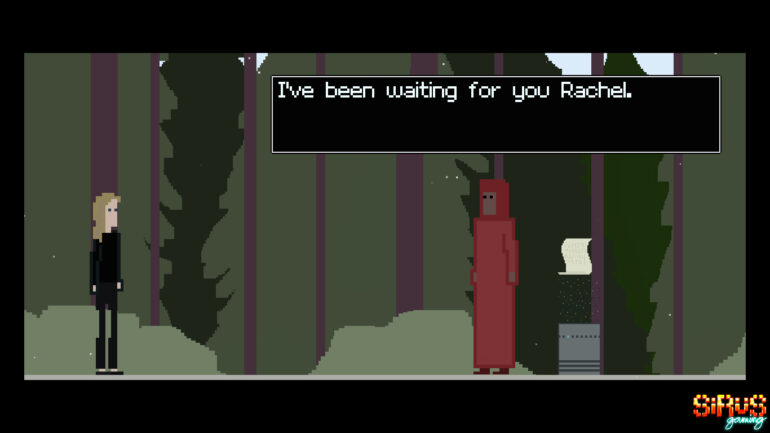 Epanalepsis is a short point-and-click narrative game that is quite mysterious in its own way. The game looks into a day in the lives of three people from different times who are somehow connected by a bizarre fate.

The three chapters follow three characters; a girl living with her partner in 1993, a guy who is into pop culture just for the heck of it in 2013, and a robot remotely operated by an anti militarist group in 2033. Every character had their own story but somehow a pattern emerged and they met a strange person who talked about having met them previously numerous times and also talked about a mysterious machine and how they were all connected to it.

The visuals of Epanalepsis is set in a very minimalistic pixelized world. Nothing really notable about the visuals except that it might have overdone simplistic part to bring the focus more on the story. The soundtrack is good and it changes depending on what era is being played.

Epanalepsis didn’t really had much to offer as a game. It’s a point-and-click type of game but the interaction between the characters and their surroundings is very minimal. It’s mostly composed of the characters commenting on the object in question and the clicking part is composed of around 2% on the environment and 98% to progress through their dialogues.

The story, on the other hand, is really quite hard to follow despite its short length. It’s so shrouded in mystery that some players might think that there’s something more to it. Well, there might be, but to be honest, the whole mystery of its story just went over my head. It is too cryptic that it kinda feels like the only ways to understand it is to speak directly to the game creator or ask them to make a follow-up game to explain what transpired. The whole game kinda felt like a literal sandbox but instead of sand, it contains pebbles and you try to dig down to the bottom of it but all you see is the flat base of the box; no secret doors, no holes, nada. You can play through the game over and over again to try out the different “paths”, but they don’t really add much more substance to the game as a whole.

As an overall verdict, Epanalepsis is a bit disappointing. For one, its premise gave out a time-manipulating vibe and the reason I picked it up is because I’m a fan of time shenanigans. Well, I’ll tell you now: it doesn’t have much to do with time travel nor anything in between. It might be the case that the dev wanted to keep the story open ended with questions unanswered to leave the players wondering but the only question that it made me ask was “Huh?” It could have had a longer and more interesting story to tell while keeping it mysterious and surreal but it just abruptly ends, leaving us unsatisfied. It’s not something that we recommend but you can go ahead and play the game yourself to experience the “Huh?” part first hand.

Epanalepsis is available for PC on Steam.