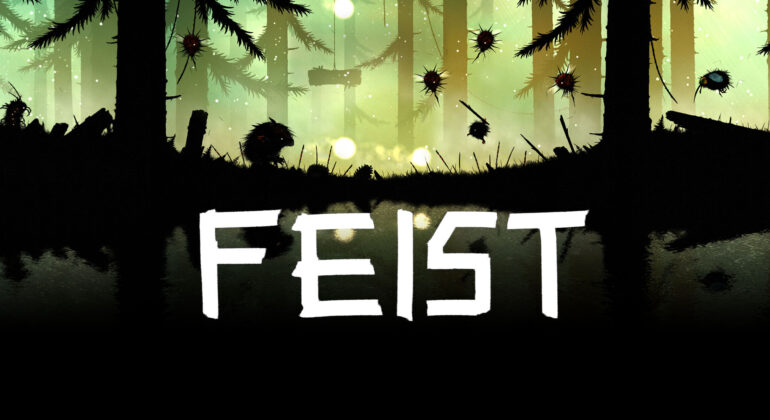 An artsy 2D side-scroller game featuring a luscious forest, black, minimalistic silhouettes, and everything trying to kill you. One would be forgiven if they immediately think about the game Limbo, but what we’re actually talking about is the game Feist. Similarities aside, one can find the experience with Feist to be a much, much different one.

From a visual standpoint, the game really bears a striking resemblance to Limbo. There is a striking contrast between the beautiful colors of the background forest and the pitch black silhouettes of the foreground, the playable character, and the creatures that inhabit the forest. The game’s choice of ambient music also helps lend to a similar feel and set the mood and tone of the game. That said, the game’s a beautiful one, though it is as beautiful as it is dangerous. The game is inhabited by all manner of foul, spiky creatures that for one reason or another, want the cute little fuzzball the player controls dead. From spiky sluglike things, to spiky bee-like creatures buzzing around, to the big fuzzy humanoid hunters that captured the player character at the start of the game, the forest is full of things just trying to kill you. The denizens of the forest aren’t the only thing out for your blood though. The forest is also full of many death traps ready to brutally punish you for the slightest misstep. It is up to the player to memorize monster behavior and trap layout, and cleverly use them against each other with plenty of platforming in between in order to survive.

This brings us to a core component of the game’s experience and that is it’s difficulty. The game may start out simple, but as the player learns to ease up to the world, the difficulty the gets ramped up and soon enough the player finds themselves against a completely unforgiving experience. The game demands precision in solving the many challenges it has laid out for the player. Precise understanding of where everything is, what objects interact with the environment, and how the creatures behave. These demands can be overwhelming for players, especially since the game’s pace requires focus to survive. The puzzles themselves are plenty intuitive, although some of them require a measure of trial and error for you to arrive to the proper solution. Fortunately the game autosaves your progress at various locations so you will always find yourself near the last place you died in. It’s this trial and error based gameplay combined with the multiple times you die that makes it similar to games like dark souls. It could also be compared to other platformers such as super meat boy, but not nearly as hectic and platformer centric.

That said, Feist is a rather short game. The game’s length means that it suffers in some aspects such as it’s eventual lack of variety, artificially extended gameplay via difficulty, and leaving the player hungry for more. The linear nature the game’s puzzles are solved also means that there really isn’t much replay value in the game. It’s a nice and quick experience, but it will leave you wanting more. Players not accustomed to punishingly difficult platformers might find the challenge a little too much to progress. Overall, the game shows much promise, but there’s not really enough of it to really sell itself.

This review is based off a copy provided by the developers