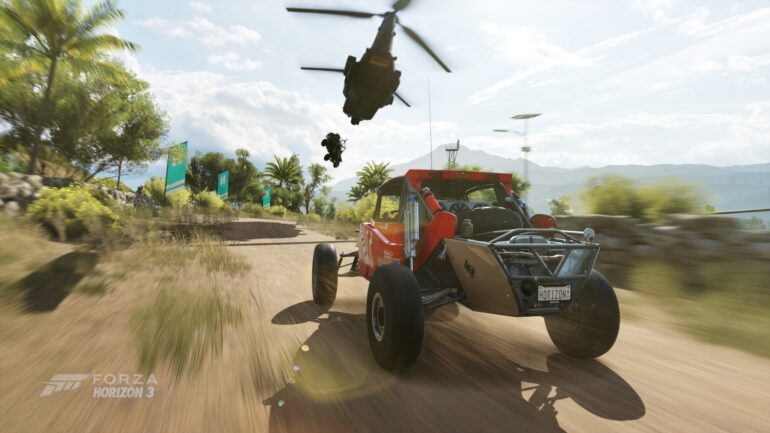 Horizon Festival – that one time of the year where a really odd music festival occurs. Odd, you say? Well, there is really no other music festival whose focus is not just on music and partying, but also on fast cars and high-adrenaline events. Makes you sort of wonder how many government permits this festival’s secured to get away with all the insanity that ensues on the road. That has got be a whole lot of permits.

Forza Horizon 3 is an open-world racing game, but would be more accurately described as a “playground”. Compared to previous Horizon titles where you were merely just a participant, this time you get to be the boss managing this year’s event held in Australia. As the boss, you have to make this year’s Horizon Festival the biggest to date, and to do so, you’ll need fans… a lot of fans. So, how do you get more fans, you ask? Simple: You go drive off a cliff. 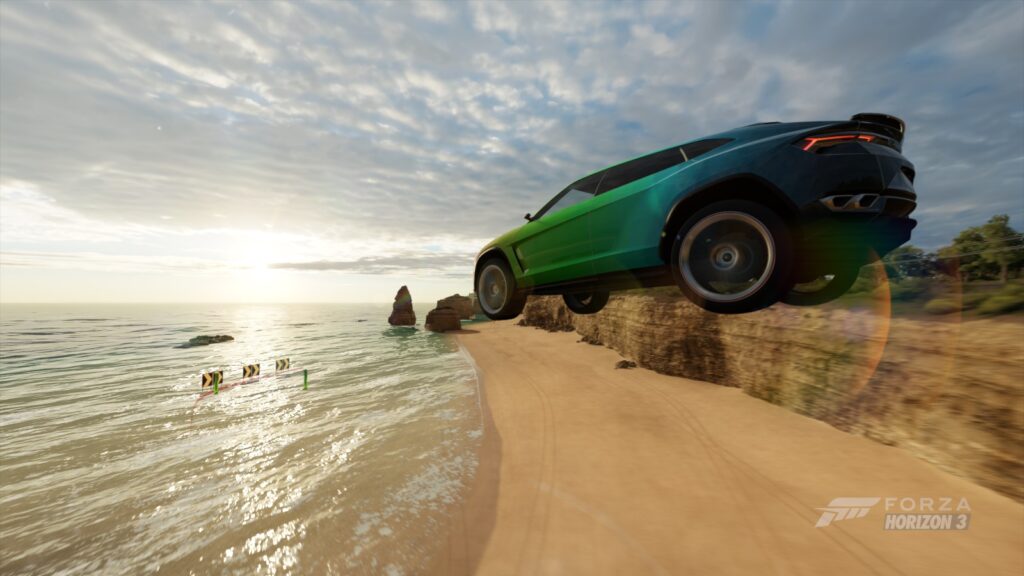 Well, if you prefer something else you can always just do a circuit race. Public Relations is sort of the name of the game here, so keeping it fresh would lure fans to the event, and you are at the helm. Right off the bat you are told to race a World War 2 era Willy Jeep in a 2011 Penhall Cholla as the opening event of the festival. As your secretary states: “it is an easy win”. Then a military helicopter flies in and lifts the jeep, only to drop it when it is near the finish line. It’s an easy win, but an interesting one that sets the tone for the rest of the game.

It is a game that just wants to have a good time, even in the races. There are some rigid race events, particularly those held in Gold Coast’s Surfers Paradise location, but the open roads and fields of the Australian countryside and Outback make for a more chaotic racing.

Now, who are you driving against? Well, it is an AI, or rather an AI algorithm called the “Drivatars”. Splitting the words, Drivatars are essentially avatars of other players playing the game. From my understanding, they take data off of other players and make an AI-controlled version of them in your game. 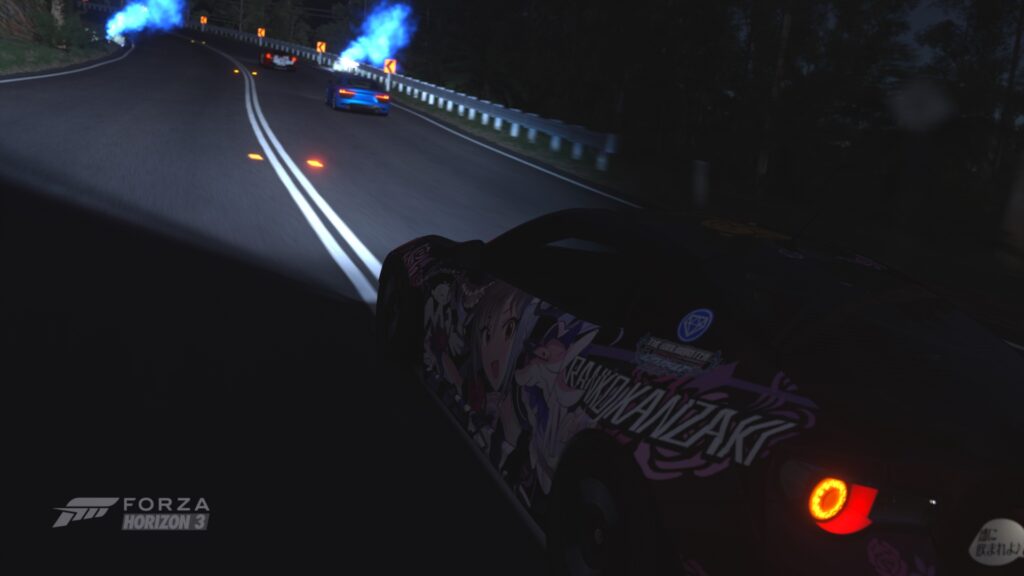 As to how accurate they are in replicated styles I cannot tell, but they do not drive in a straight, robotic line, and can be rather unpredictable. Who you drive against or with in your world is determined by some skill system, so it will automatically up the difficulty when needed, along with the rewards from the increased challenge. It is a nice system, making the game feel more natural, but if you really want the real deal experience there is the multiplayer.

Skipping the usual racing modes, online mode has two standout modes: King and Infected. Both game types are not new in the first person shooter genre, but in a racing game, it is totally different. The dynamics have changed since you cannot shoot anyone as a car, so you have to run over them. Both modes use that logic, but the win conditions are different. In King, it is a race to see who has the longest time as ‘King’, with the ‘King’ transferring to whoever rammed the previous king.

Meanwhile, in Infected, one car starts as the infected and must infect the other cars. Both modes are a blast to play with furious juke moments and encompass the laid-back nature of the game. Just a tip: bring a 4WD vehicle, but that is entirely up to you.

I think that this is why most racing games tend to fall flat due to the serious nature racing games have. Forza Horizon has always been that weird exemption. It sits somewhere in between Burnout’s pure arcade nature and Forza’s simulation heritage, so it keeps the action and fun going, while not trying to restrict you with all the simulation fluff. For example, supercars like the cover child Lamborghini Cenetario can go off-road. Yes, it is not the most suitable vehicle for the job, but it is very much doable and you can still win a race even in a situation like that. It is a really odd mixture, but nonetheless satisfying due to how refreshing it feels. You do not have the shackles of the simulation, but it still feels grounded, making driving the 350 cars of different types heavenly. 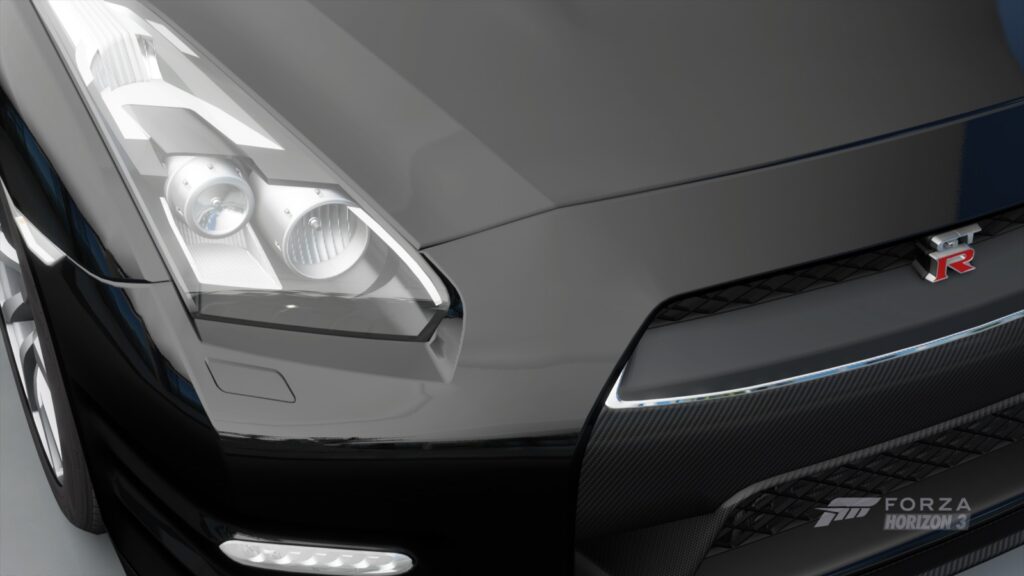 As the second Forza title to be on PC, with Forza Motorsport 6 Apex being the first, both games run on the same engine, but there is a noticeable stutter even on an Nvidia GTX 1080. Would I say the visuals are too heavy? Not really. The game is optimized to a sense, but it seemed lacking considering how smooth the free to play Forza Motorsport 6 Apex runs. Back to visuals — the game is a visual treat, which is crucial for any racing game these days. Australia is beautiful- – the desert, the city, the jungle, the coast and all. A lot of work was done to make this virtual reproduction of Australia vibrant and varied to the point I would want to visit the country. Not only is the scenery beautiful, but the cars on offer too.

Forza Horizon 3 is rather a strange one. It sits in its own category as a racing game genre, but is somewhere in between the arcade and simulation type of games. It’s not similar to iRacing, Project Cars, Need for Speed or Burnout — it is what it is. Forza Horizon 3 is a good game that’ll guarantee you a fun time.