Bonding families through the years with God of War. 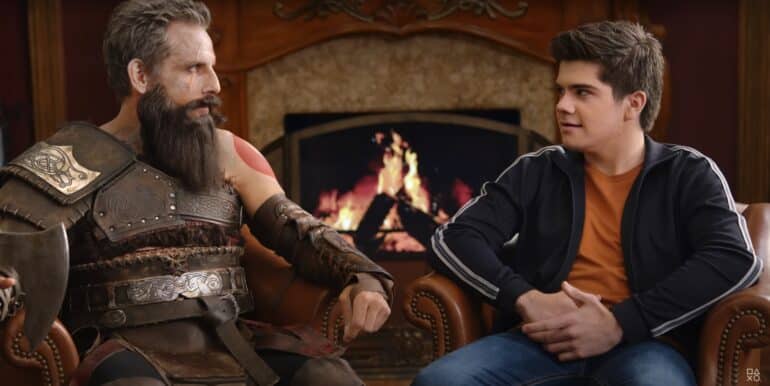 Sony Interactive Entertainment has recently released a new God of War Ragnarök TV spot that features three particular celebrity families talking about parenthood and comparing it to the game’s most “wholesome” family duo, Kratos and Atreus.

Three celebrities, together with their children, have been featured in this God of War Ragnarök TV spot. These are Ben Stiller, LeBron James, and John Travolta. All of them talk about the challenges of parenthood, the difficulties they had to face while their children grew up, and what they could learn from Kratos as the best dad.

Stiller is particularly the most hilarious one here as he is fully decked in Kratos costume with makeup and fake beard to complete the set. He even has a Leviathan ax with him at all times.  Travolta meanwhile takes notes of Stiller’s advises while James shares some learnings too.

Here are their quotes from the video:

Ben Stiller: Putting on the Kratos beard and makeup felt very empowering. The war paint really is useful in terms of letting people know you mean business. I found the beard made me feel wiser…though [my son] Quin didn’t seem to feel that at all.

LeBron James: Something about having the Leviathan Axe in your hand transports you to a different world. We all play the games on the screen, but being able to bring those moments to life and connect in a different way is a pretty cool thing.

John Travolta: Similar to Kratos and Atreus, the balance of ‘holding on and letting go’ is a dynamic many parents can relate to. There’s no better feeling than seeing your child grow and mature into the best versions of themselves.