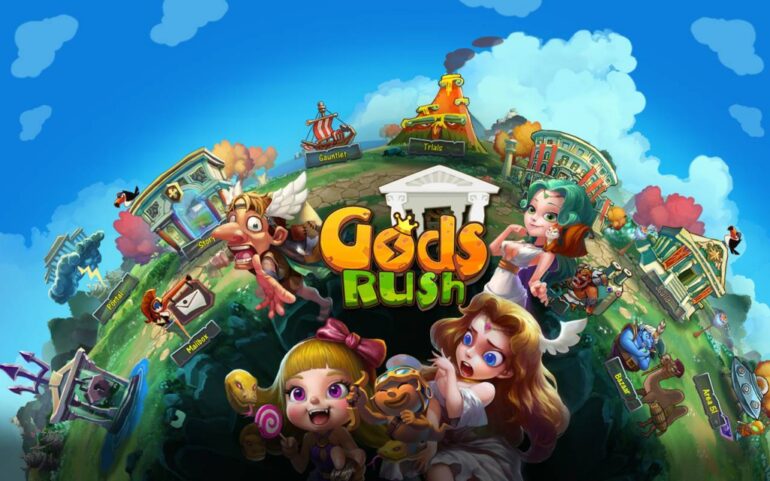 Control the legendary heroes and lead them to victory.

Gods Rush is a strategy role-playing game developed by IGG.com for Android and iOS devices. Set in ancient Greece, you get to lead your own team of heroes and go on quests, fight against monsters, and wage battles against other heroes. Your goal is to have the strongest heroes among heroes by enhancing their equipment, leveling them up, ascension, and evolving them.

In Gods Rush, you basically form a party of heroes made out of gods, goddesses, mythical beings and beasts each with their own set of powers and skills. At first, you get a basic set of heroes; the lesser known beings such as Leandra, Cerberus, Chryseis. Along the way, you can collect hero shards which you can use to unlock stronger and more powerful heroes. Most shards can be acquired through quests while some shards that belong to the mightier gods such as Zeus, Poseidon, and Hades can be acquired only through raffles or purchased with special currencies. Heroes are classified according to the position they take in a battle: front, mid, back. They can also be subclassified according to their skills and roles in battle.

Combat in Gods Rush starts out as a clash where your heroes meet up with the enemies and start throwing attacks at each other simultaneously. Once you fill up your heroes’ rage bar, you can have them unleash a powerful attack. Timing is key to your victory; with properly timed attacks, you can even beat heroes several levels above yours. As with any other role-playing game, a good party composition is important and it depends on the kind of stage you are dealing with. With more heroes, you will have enough versatility in your roster to be able to create the best party combination for every situation.

One of the good points in Gods Rush is that there are several ways to power up your heroes. There is the straightforward leveling up by having your heroes gain experience through combat or by eating cake(experience boosters). You can equip your heroes with the items that they need that will surely raise some of their stats. Items can also be enhanced to pump up more stats to the hero. Once you complete a set of items for a particular hero, he or she can then evolve to a higher rank that can equip even stronger items. Lastly, you can collect more hero shards to have your heroes ascend to a higher rarity and gain more stats per level. With these options, you won’t find yourself stuck fighting against bosses for too long.

There are several different game modes in Gods Rush that have different premises. There is the story mode, the arena where you could fight against other players’ heroes, and the gauntlet where you do your best to fight against other heroes and reach the farthest stage that you can. There are also modes that give out particular items such as the portal and the trials mode. Once you join a guild, you can fight against a much stronger and fortified hero with your guildmates. In the recent update, players can now fight against one common world boss, a new hero yet to be unlocked once defeated.

Despite being a 2D game, the visuals of Gods Rush are still quite satisfying. Its cutesy cartoonish art style has a certain charm that make it stand out among the other games that share the same gameplay. It is pleasing to the eye and would surely entice even the younger players to play.

Gods Rush revolves around the aspect of grinding to get stronger; not just your heroes but mostly your own team level. You can do this by doing your daily quests and going into battle. Your heroes can only go as high as your team level and it will also have an effect on the equipment that your heroes can equip since all items that can be equipped have level requirements. You will also find yourself farming for items and their ingredients most of the time. Equipment that are meant to be used by high-leveled heroes tend to have rarer and harder to obtain ingredients. This gets repetitive over time even with the option to sweep levels several times at once.

The devs of Gods Rush regularly update the game with new content and occasional events to keep things going and relevant. Despite the in-game activity, players can still find themselves in a moment of dull some time around level 30 to 40 and things will pick up slack afterwards, only to get to the point where things start to get slow once more. This is mostly due to the fact that your team level acts as some sort of a limiter, not only to your heroes but also to the levels that you can play in. Also, new players might find it hard to rank up against the other players in the arena since the strongest players can establish themselves high enough that they don’t need to worry about ranking down for months. The players’ power levels rise up steadily at the same time that it gets generally stagnant in the arena.

The main currency in Gods Rush is gold while the premium currency is gems. Gold can be easily farmed in the game while gems can be bought with real money or gained as rewards from achievements. Gods Rush is generous at giving away  gems to its avid players so the pay-to-win problem is not much of a big limiting factor in this game.

If you are searching for  a comprehensive RPG that gives you a good amount of grinding, then Gods Rush is just for you. It may get repetitive and it may not be on the top 50 games for smartphones, at least in Google Play, but it is still one of the nicer games in its genre that is available right now. Gods Rush is great for players who like to grind to get stronger and compete with other players. It may also appeal to those who just like unlocking all the heroes for the sake of collecting them.

Gods Rush is available for smartphone users in the Play Store and in the App Store for free.