Learn about Nightwing and Red Hood gameplay mechanics like their unique traversals and more. 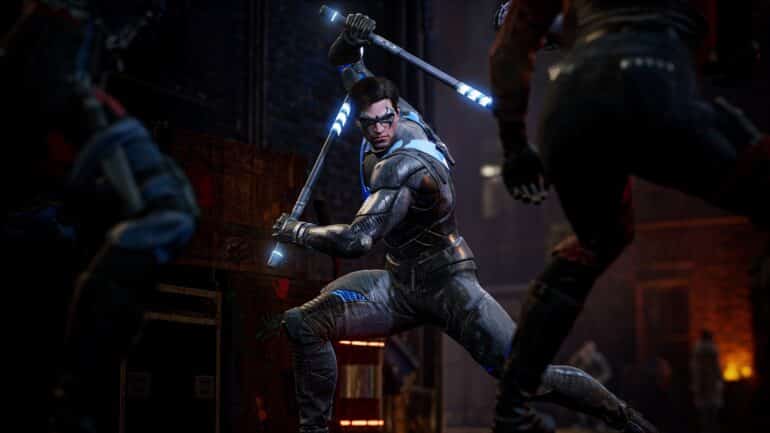 After the recent tease that the game company announced on social media that featured the two heroes, a new gameplay trailer was shown today focusing on how Nightwing and Red Hood plays out. The video first focuses on the former, where he finds some criminals performing a digital heist on a rooftop. He quickly jumps into the scene with high tech hang glider and busts some criminal butt. He is more of an acrobat and has gymnastic moves, which makes him “ping-pong” throughout the combat zone, according to Game Director Geoff Ellenor.

Red Hood then arrives with his interesting way of traversal. While he can use gadgets, it seems his resurrection by the League of Assassins has made him develop “otherworldly” powers. He can “hop” through the air as if there is a floor above the sky, which is made up of his soul power. He can then swoop down for the kill with his guns and gadgets. He uses “non-lethal” gunshots, brawler moves, and sticky bombs to take down thugs.

Can You Customize the UI HUD?

According to Ellenor during his narration on the gameplay video, players could change the way the UI HUD would look like to their preference. They can do it with a minimum look or they can add tons of other widgets and UI for maximum information overload. They can customize it via the menu screen.

Are There Vehicles in Gotham Knight?

So far, there are Bat-Cycles, and Nightwing’s hang glider were shown as ways of transport in the game, so there could be more in the future. In this gameplay video, Red Hood is shown riding his own Bat-Cycle and trying to pursue an ice cream truck manned by criminals. He makes quick work of the driver and quickly serves the vehicle after hijacking it.

What is the Home Base of Gotham Knights?

Ellenor showcases the home base of the Gotham Knights, the Belfry. This is where everyone collects clues, gather up, check on the large digital map of Gotham City on the Bat Computer, and more. The digital map allows players to track challenges and the next story missions to discover.

Are There Customizations with Outfits?

Players can approach the Workbench so players can upgraded equipment, check on blueprints to unlock new suits and weapons, and customize them to show new looks. It seems stats will be the priority here in Gotham Knights, so expect to see some “ugly” combinations in the future, unless Warner Bros. Interactive plans to offer to change the equipment’s look for better ones.

In a brief respite, Dick Grayson aka Nightwing approaches the “shrine” of Batman, or what looks to be what was left of his outfit after his “goodbye” at the start of the game. Red Hood aka Jason Todd is seen here somewhat praying at the shrine and looking way buff than his comic, cartoons, and TV series versions. The two talk about when they were going to visit Bruce Wayne’s grave while they are staring at the shrine. It seems Grayson is the one that is quite affected of the loss as it seems Todd makes him realize this. “Sometimes, you’re an idiot Grayson,” Todd says as he walks away.

How Does Stealth Work?

According to the game director, the stealth mechanic will be one of the better options to choose from in a main mission in Gotham Knights. Players can still go guns blazing, but stealth would yield better results with minimal damage. Nightwing has the ability to do elemental shockwave that can interrupt enemy armored attacks and deal elemental status effects like paralysis. Batman: Arkham’s Detective Vision is succeeded here as the Augmented Reality Vision, which shows clues in real time that could lead to hidden rooms, hidden floor gimmicks, clues, and more

Any Court of Owls Enemy Variants to be Wary of?

There are the regular grunts that players can beat up during the missions, but there are tougher enemies to defeat, which Red Hood encounters during the hunt. The Talon Gladiator is one of those powerful adversaries that can do unblockable attacks, can block attacks with a shield, and has a wide swing with a spiked club. To make it worse, he can revive himself for a second attack, which could be fatal if your life bar is on the red.