Guardians of the Galaxy: The Telltale Series: More Than A Feeling Review – All About Feelings

Guardians of the Galaxy Episode 3 – More Than a Feeling is the shortest episode in the series so far. While the length of the episode help addresses some of the pacing issues I had with Tangled up in Blue and Under Pressure, it is not without its flaws. Majority of the episode felt like a set-up for the big action set piece at the end. This isn’t to say that the first and second act were without their moments as these is where we explore the history between Gamora and her sister while building upon the on-going tension surrounding the Guardians. 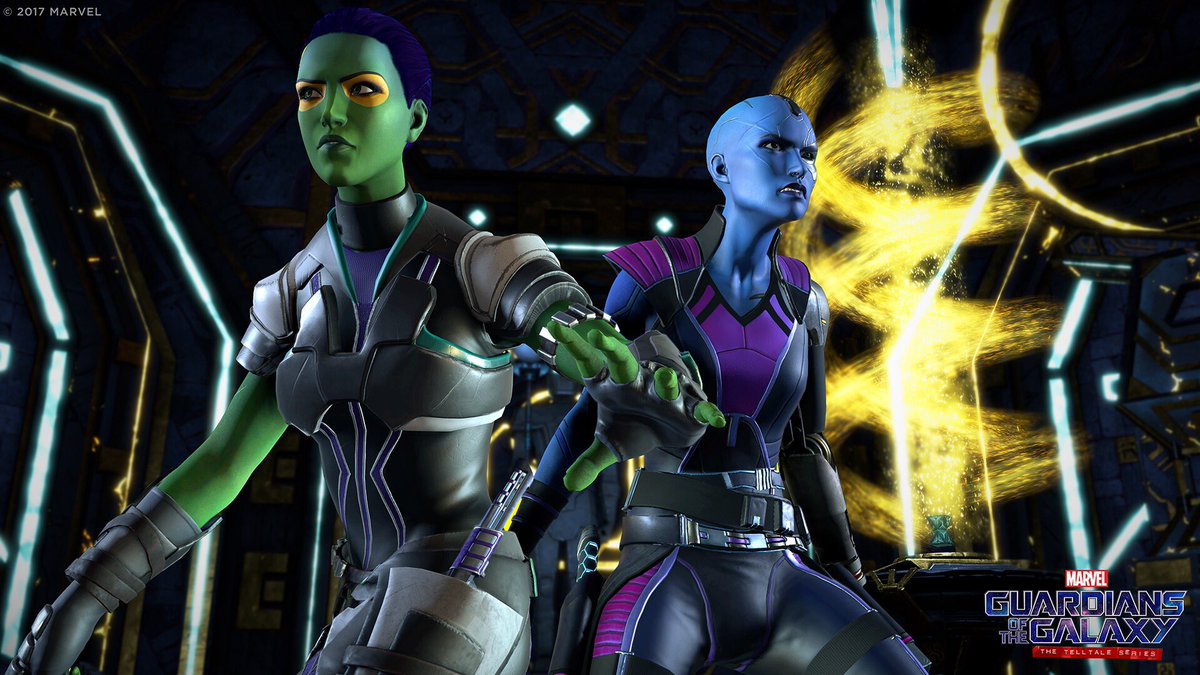 More than a Felling starts exactly where Under Pressure ended with Peter and Gamora entering the temple. Here they each have another vision. Peter’s vision continues to explore his relationship with his mother while Gamora’s explores her early relationship with her sister Nebula and her adoptive father, Thanos. Soon after, both guardians break free of the visions and the story moves forward.

Very early in the episode, we are introduced to Mantis, an empath who is tasked to be the guardian of the Eternity Forge. Why she was chosen as the Forge’s protector is beyond me. They might have explained it and I missed it but it felt mostly like a way to force the character into the story. Granted I am not really familiar with the character outside of the movies and this might have been canon in one version of the comics but it still felt forced to me. This is not to say that the character had no place in the episode. This series aims to explore the guardians and their relationship with each other and Mantis’s powers is a great way to do that.

With her help, the Guardians learned that Groot is not really a fan of Rocket. Rocket often uses the fact that he is the only one who understands Groot to his favor, sometimes changing the statement to benefit him. This was one of the character highlights of the episode to me. We, thanks to the Guardians of the Galaxy movies in the MCU, always see Groot and Rocket as best friends. This puts a wrench into their dynamic and makes us question every time Groot allegedly sided with Rocket.

Another highlight of the episode is the use of the “Unreliable Narrator” trope. This storytelling device was used to perfection in TellTales’ Tales from the Borderlands and it was refreshing to see it here. A major source of conflict for Gamora and Nebula was an incident related to a Kree General by the name of Tar-Voll. Stuff happened that made one hate the other but as the trope dictates, their truth isn’t the whole truth. Only through understanding, both sides of the story were they able to put their differences aside.

I took issue with how friendly Gamora and Nebula were too each other after they talked. To be fair, it was a simple solution for a problem that was blown way out of proportion but with the history between the sisters being as chaotic as it is, fixing this is no easy feat. It took great effort and a mediator in the form of Peter Quill to get them to understand. This is why I did not buy the drastic 180  in character interaction between the two. Sure, the misunderstanding was settled but there is still so much history there. A little more hesitation and reluctance would have made their reconciliation more believable.

It isn’t a TellTale game without some big decision to be made and for More than a Feeling, this is to decide the fate of the Eternity Forge. Do you destroy it preventing other people from using the Forge for evil or do you unlock its full potential for the benefit of your crew with Gamora and Groot wanting to destroy the forge and Drax and Rocket wanting to empower it? While Drax’s motivation for empowering the forge is well established through the previous episodes, Rocket’s wasn’t. At the very least, my version of Rocket wasn’t. His want to use the forge completely destroys any character growth he had in the previous episode and throws it out the window.

Episode 3, for the most part, felt like a filler episode. Most of the episode was spent on getting to know more of the Guardians, especially Gamora, and any main plot was relegated to the end only to have it feel like a set-up for future conflicts. For those of you looking for big QTE fight scenes and heavy moral decisions, this episode is not for you. This episode focuses more on character and this is something I enjoy very well.

Guardians of the Galaxy: The Telltale Series: More Than A Feeling - Review
Score Definition
We tell you, it’s a good game! It’s not average! It might have some problems here and there, but you have to admit it is a “Good” game.
Pros
Character heavy narrative
Return of the Unreliable Narrator Trope
Cons
Story progression was limited
Felt like a set-up for episode 4 and 5
7.5
Good