Last two weeks ago, one of the most beloved literary franchises of the modern age released a free to play mobile game, incorporating some of the most well-loved aspects of the series and bringing them straight to your phone. I’m pleased to report that I was absolutely delighted with Love Live Puchiguru- oh wait, was I supposed to talk about Harry Potter? 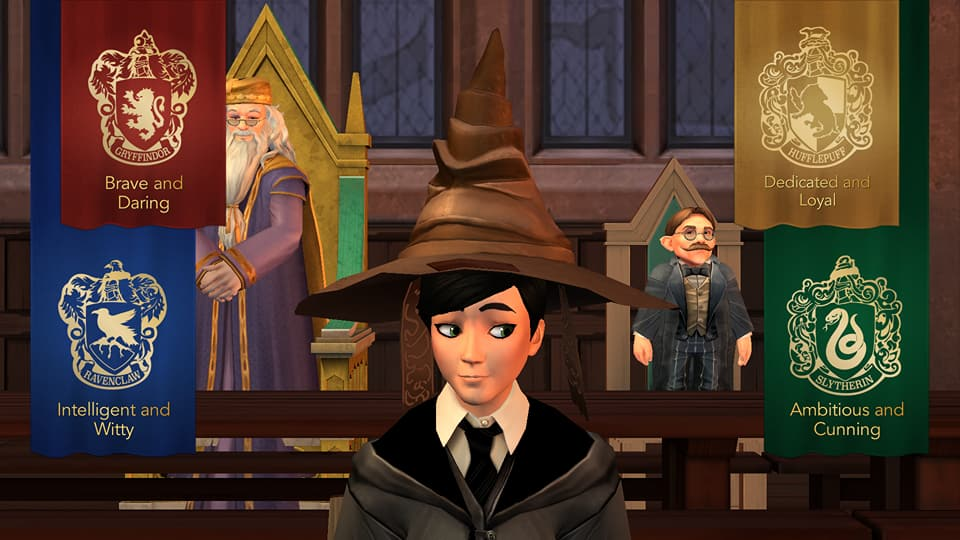 Harry Potter Hogwarts Mystery is a point and click adventure game set a few years after the initial fall of Lord Voldemort. The protagonist is accepted to a Hogwarts with many familiar faces, and flat out lets you pick your house. (Oh come on, half the fun of the Sorting is… well, sorting!). After that, you’re thrown into predictable Slytherin bully school drama, and school lessons that involve you prodding your screen until you run out of energy.

Gameplay is energy gated, and some story missions are time-gated and don’t unlock until a few hours after you clear the prerequisites – you can buy gems to accelerate these. Yes, taking classes, learning spells – every move you make costs energy. Turn a page? 3 energy. Chat with Rowan? 5 energy. Glare at Merula Snyde from across the classroom? 5 energy. It’s borderline ridiculous. Not only is energy in short supply, cosmetics are priced so high that even EA would be impressed.

I got about as far as the Wingardium Leviosa lesson before deciding that the game wasn’t worth my time. It’s a shame because the story is legitimately interesting – your older brother got expelled from Hogwarts a few years ago because he’d gone looking for some cursed vaults in Hogwarts and was putting people at risk in the process. Teachers and students at Hogwarts alike make sure to remind you of this at every turn.

Your character has all of the notoriety that Harry himself is scheduled to command in less than a decade in-universe, without any of the perks. Rowan’s nerdy and charismatic, but is no Hermione and Ben manages to be more interesting than Neville without being as appealing. Merula could have been great competition for Draco if her antics weren’t as shallow as an empty Pensieve.

Tonks and Bill Weasley are still at school age in Hogwarts Mystery, but at the rate that I’m going, it’s looking like I’ll be able to graduate from high school all over again before I get to actually talk to them. You encounter them in Year 3, and the game supposedly covers 7 full years of your character’s stint at Hogwarts. I’m not sure what year it’ll be when I get all the way there.

This game buries its gold under a mountain of energy-gating and time-wasting mechanics. If you’re a Harry Potter diehard, just wait for the Niantic AR game to come out, or hold out a bit more until Fantastic Beasts 2.