Become a henchman and give a big impact. 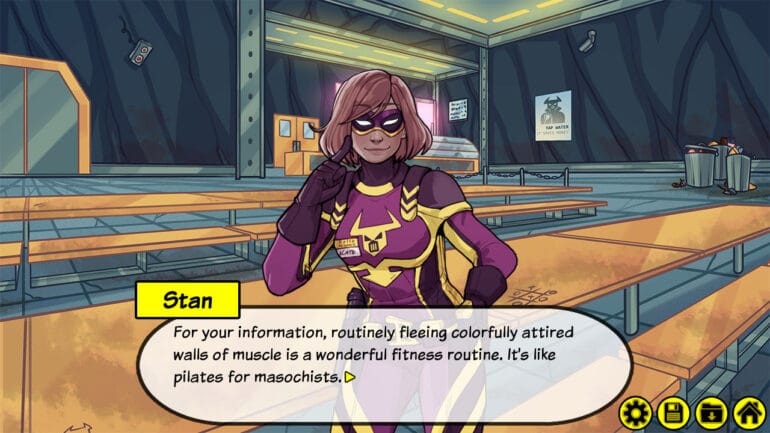 This new game will be coming to PC with the support of publisher Top Hat Studios – Switch, PS4, PS5, Xbox this coming October 14, 2021.

This new interactive adventure is written by Marc Soskin, which is actually the former part of the award-winning Outer Worlds narrative team. This game follows the story of Stan, an unlucky henchman to the supervillain Lord Bedlam. As Stan tries to keep his head down (and attached to the rest of his body), he’ll soon realize that his decisions as a lowly punching bag may determine more than just the fate of his student loans.

Henchman Story is a love letter and also a playful twist on the ever-growing superhero genre. Talents from A Hat in Time, My Hero Academia, and Marvel Avengers Academy have fully voiced this game, which brings life to its cast of characters. It offers eleven different endings, and a whole mess of relationships and choices in-between. Players that are looking for a successful career as a valued flunkey might have to watch out because they could change from ally to nemesis, a partner to a stranger or a friend to a traitor.

Being a henchman is a tiring, thankless job. The spandex chafes, there’s tons of late nights, and your boss rarely remembers your name. But, as Stan is soon to find out, sometimes even the decisions of the lowliest henchman can make a big impact.

Henchman is a very tiring job and has a lot of very late nights, and even your boss forgets your name a lot of times. This time around, Stan will find out that some decisions can actually give a big impact.

Henchman Story’s October launch follows a successful Kickstarter campaign, raising over $18,500 to power up this supervillain adventure. Publisher Top Hat Studios are delighted to be supporting with the console releases.

Regarding the announcement, Soskin said: “The initial concept behind Henchman Story was a marriage of my passion for complex, branching video game narratives, and my predisposition for weird, irreverent humor. To me, both comedy and games excel at showing us things from a different perspective, and that’s the goal here.

“When you see this wild superhero setting through the eyes of some ordinary schmuck who gets his ass kicked for a living, it takes on a whole different vibe with a whole different meaning. We really committed to that. Stan doesn’t have any powers or a tragic backstory, he’s just some dude trying to get by in a world where people fly and bench press cars.”

He continued – “It’s been amazing to see how that struck a chord with so many people, especially during our Kickstarter campaign. It was a little nerve wracking launching something like that in the middle of the pandemic, but the support we’ve received from our backers really helped us push through to create something we’re proud of.”

Henchman Story is an interactive story where you play as a beleaguered henchman working for a bumbling supervillain.

It’s thankless work. Week in and week out, you put on your purple spandex and get the crap beaten out of you by much stronger, much cooler people wearing much fancier spandex. But the checks clear, and Lord Bedlam offers healthcare, so a job’s a job, right?

Even henchmen have bills to pay, and sometimes, even henchmen can make choices that change everything.