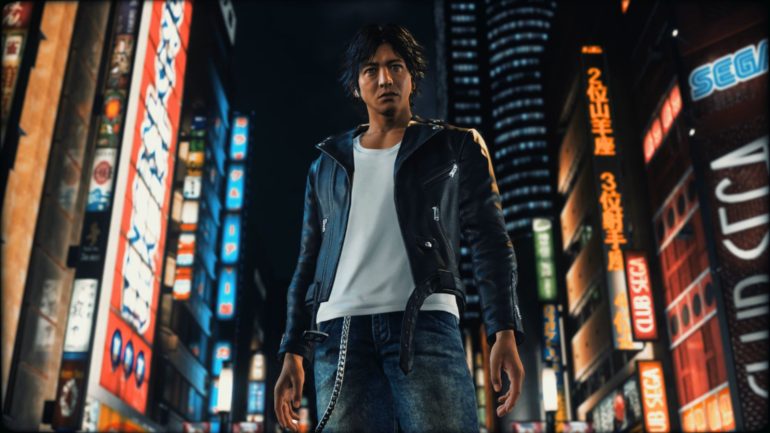 (Noir theme saxophone playing) When the nights are filled with the misty air of chaos and strife, when the law is stretched far too thin for order to be maintained, when the citizens are no longer safe as the threat of those who have power looms over the shadows, like a gamer being coerced into spending on a loot box or having paid a full $60 game and still having to watch an ad.

Kamurocho, the land of the lawless, where power and money are all that matters. Justice is barely even in the dictionary of this tiny section of the country. The district reeks of shadiness, almost each and every corner are covered thick in it and no one even cares. But somewhere in this crime-infested backwater of the country, a righteous soul exists, hiding in his rent cheap office, sleeping his but off his 2nd hand couch, scouring the streets to find hope that justice will be brought to those who were wronged and biding his time that he will finally serve JUDGMENT! (Saxophone stops playing)

Judgment is the latest game in the Yakuza universe and while it is a spinoff there is too much familiarity here and there that it didn’t really feel all that different in the end. Takayuki Yagami is the righteous detective hero that the world of Judgment gives us and while he is no Kazuma Kiryu, his ability to hold himself in a fight which is only equal to his ability to find himself in literally the middle of a lot of trouble is so similar to Kiryu-chan that it makes the transition to this new character a smooth experience.

Yagami maybe on the other side of the law but his connection to the Yakuza through his past and the company he keeps doesn’t make him feel much different at all. He’s an ex-lawyer who wants to be able to find the right bad guy and put him behind bars even if has to get his hands dirty like wiping out a building full of Yakuza or tracking and fighting a powered-up panty “professor”.

The tale of Judgment is still set in Kamurocho but the first time you roam around the streets you’d probably think that you were in a different district or even a different city. It’s still Kamurocho but it felt a bit different and most notably looked different. After running around and confirming all the streets and notable areas were one and the same, the main reason for the change at least to me was the difference in lighting. Kamurocho, as I have personally come to know in Yakuza 0 and Kiwami 1, is shaded in a bright neon yellow while the one in Judgment was neon white. It’s amazing how much can change just because there’s a different shade of lighting. However, there were also changes to the environment like places that used to be parks but are now buildings which really made me feel like the city is also going through the times and changing.

Combat in Judgment is really different, in Kiryu we had an all-around powerhouse who could fight in 4 different fighting styles and decimate enemies through an overwhelming amount of brute strength. In Yagami, we have someone who has swift, acrobatic, and fluid movements that disorient enemies and skillfully dispatches them. While he may only be limited to 2 fighting styles: the Crane and Tiger, he is still a force to be reckoned with. His Crane style has move sets with an extended range which is good for dealing with multiple foes at once especially since it focuses more on kicks while his Tiger style mainly uses his arms so they’re good for one-on-one fights and they even utilize his chi which can use to release it on an enemy for as a powerful delayed strike.

But that’s not all that Yagami can do, his build, quickness, and coordination also allows him to launch himself from walls to deliver strikes or a crowd controlling senton like the move that allows him to send enemies flying to their allies so that whoever gets hit by it takes damage. While the move is pretty awesome the devs made sure it’s not overpowered so one can’t really use it as a go-to move to make them feel godlike. The only problem I personally had with the wall launching moves is that the targetting is really off. There are plenty of times wherein I would hit nothing but air on the opposite direction or hit the enemy on their feet which I’m not even sure if it does any sort of damage.

Yagami has plenty of skills and he can unlock them via his phone app (who knows when we’ll be able to unlock skills through apps like Yagami). There are plenty that is useful for combat, detective work, and even for booze and breaking and entering. Most of the skills don’t even cost much and the currency they use called SP can be easily farmed by doing simple actions like eating, drinking, taking a cab multiple times, and doing each objective in the main storyline. Seriously though it’s really simple to get SP where sometimes all you have to do is just walk to the destination to get it.

Judgment’s navigation feels different compared to the main Yakuza games. Yagami feels faster than Kiryu and he doesn’t tire out so one can easily reach their desired destinations faster. It also helps that the taxis are now able to send you to more places internally in Kamurocho like the millennium tower unlike in Yakuza 0 and Kiwami 1. My problem with navigation though was that there was a significant lack of enemies roaming the streets when compared to Yakuza 0 and especially Kiwami 1 wherein my problem was there were too many thugs and Yakuza out and about. Although after progressing through the story they appeared more and more after certain events with different factions. Be careful with money early on though since the enemies in Judgment rarely drops cash and if they do, it’s usually small change like ¥1000 or ¥5000.

Judgment also has a social feature in the gameplay which will be unlocked via the main storyline. Basically, you just have to make friends with some notable side characters like your NEET hacker friend, or that Neko blogger who takes care of the stray cats of Kamurocho, the convenience store clerks, or even your kind landlady. Making friends can be fun and leads to some hilarious stuff but they can even be pretty useful in fights, like when I fought a stalker in a convenience store where I befriended the clerk. I knocked over the counter and his head broke into the microwave and Yagami told the clerk to turn it on which led to his head being burnt through microwave radiation.

Although there’s still a lot of friends to be made some of them lacked the charm that Yakuza 0’s NPCs had except for a few like the President of a restaurant chain who just standbys on the front entrance of one of his restaurants. It also doesn’t take that much time to fully befriend these characters and some are really simple like the convenience store clerks who can get befriended just by simply spending ¥7000 in their respective stores.

Judgment also has a lot of things to do like the minigames in Yakuza like shogi, poker, and arcade gaming to name a few. The new minigames are also fun like drone racing and VR board gaming. It certainly feels odd playing a VR game within a game. Although I personally have to give this game a minus for the feeling of disappointment that there’s no karaoke.

On the detective side of things, you’ll be doing the things that detectives usually do like stakeouts, tailing suspects, chasing after them, running away from Yakuza and even police, taking photographic evidence either through your phone camera or through your drone, looking for clues, providing evidence, making decisions that would ultimately lead to the truth through deduction. Yes, Judgment is basically a detective game through and through and it’s detective mechanics are quite solid, especially when you use it for a trial. One time, in particular, I had to defend a kouhai (Junior) from charges of eating a limited event cake and Yagami had to really go all the way with his detective work for that one.

However, Yagami’s main case is finding out who the killer is of a case wherein 3 Yakuzas from the Kyorei Clan are killed and had their eyes gouged out and bringing him to justice. Yagami’s a former lawyer himself but left that life after he won his client an acquittal but he killed his girlfriend just right after getting out of the case. Yagami now has to use his detective skills and what few allies he’s got in order to find the serial killer despite being protected by Kamurocho’s most powerful Yakuza, Captain Hamura of the Matsugane family of the Tojo Clan. What makes matters worse is that most of the city is under the watchful eye of Hamura be it through the Yakuza or even the salarymen that walk the streets.

Judgment may not be the next Yakuza game but it almost feels like one. Judgment definitely captures the sense of being a detective and whether it be dealing with an adultery case, a case of poltergeist, or even just taking photos of missing nekos, Judgment makes you feel like you’re a bonafide private eye who answers the call of the helpless whether there’s yen in it or not. So beware evil doers and lost items and pets for the time has come for Judgment! 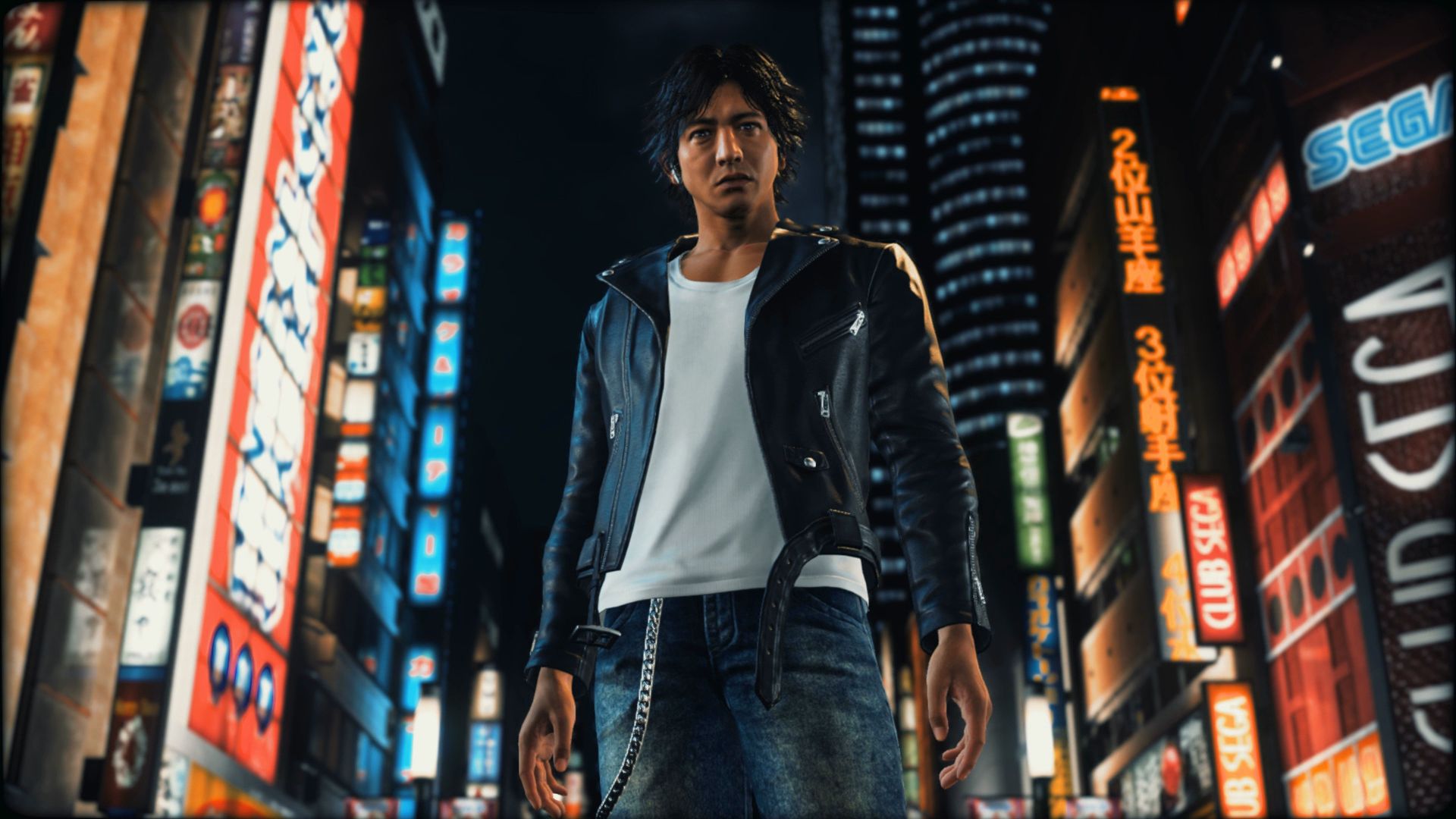 Judgment – Review
Score Definition
When the issues of a game are rolled and stomped by its greatness, then it’s something to invest on if you have some spare.
Pros
Detective Work
Fighting
Specials with Friends
Cons
No Karaoke
Lack of Enemies in the Streets
Lack of Cash Drops
8.5
Great