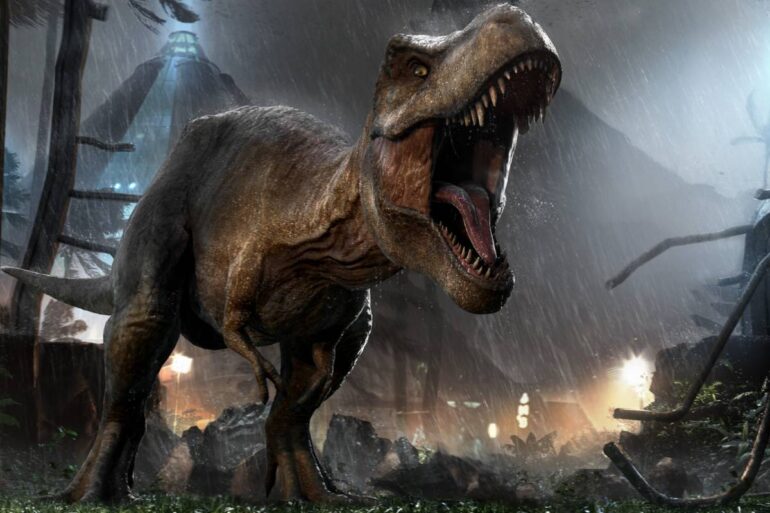 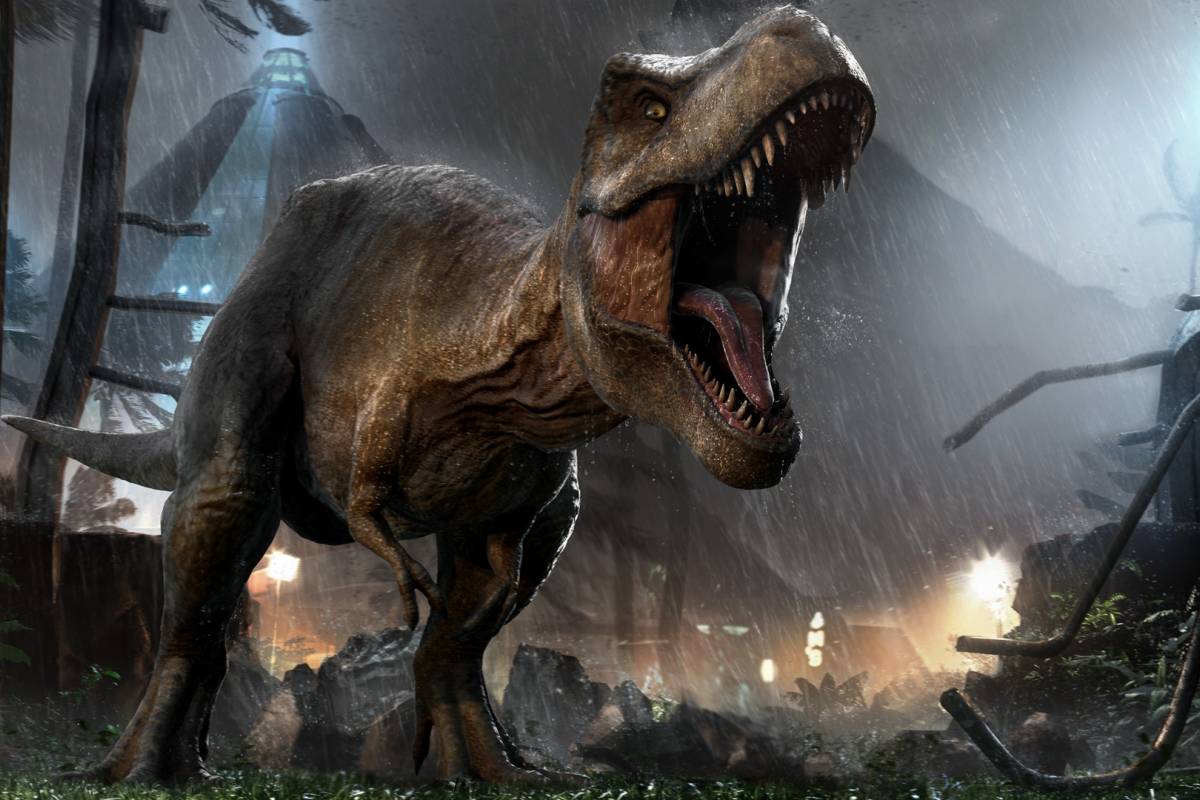 You’re the evil corporation that wants to milk every single penny from everyone’s pocket. Making the impossible possible is your calling, and that calling is opening a theme park filled with pre-historic animals that walked on this planet almost three hundred million years ago. While it sounds tempting and exciting, Jurassic World Evolution doesn’t reel you in just to look at realistic dinosaurs – but genetically modify them to your liking as well.

Evolution borrows a lot of elements from Blue Tongue Entertainment’s dino-themed park simulator. From dispersing teams to dig up fossils for DNA extraction to tranquilizing a rogue T-Rex from above, everything is going to be familiar for players who have played Operation Genesis.

What Frontier did is pretty simple: innovate and bring in more in-depth mechanics. You can upgrade your facilities to your liking, research on tools that will be beneficial to your park’s survival and security, and even build your own Storm Defense tower to protect buildings.

With its deep gameplay mechanics as a park management simulator, you won’t be disappointed. Even I enjoyed every bit of what the tutorial presented. While the tutorial was frustratingly slow, you get to learn a lot on the first island.

From a person who does not have patience with community building and park simulators, Jurassic World Evolution puts even the freshest player in the genre at a balanced difficulty.

As the Jurassic Park franchise slowly expands, since Evolution is heavily inspired from the post and pre-Jurassic Park era, these new islands are near to the iconic Isla Nublar (Site A) and Isla Sorna (Site B) are your starting points.

There are five islands where you can build and manage your park: Isla Matanceros, Isla Muerto, Isla Pena, Isla Sorna, and Isla Nublar. These islands are identified as The Five Deaths by Dr. Ian Malcolm in the game.

If you didn’t pay close attention while watching The Lost World: Jurassic Park, The Five Deaths were mentioned right before Dr. Malcolm, Eddie, and Nick landed on Site B: Isla Sorna.

Each island has different characteristics and challenges.

Let’s take Isla Muertos, for example. Storms are deadlier here and it can destroy facilities on your park. These storms don’t just devastate everything where it lands, it also enrages your dinosaurs – especially the carnivores. Velociraptors, for instance, panic as their comfort meter gets pulled down by the storm causing them to go berserk where they attempt to break the wall enclosures. To add more challenge, dino-diseases are rampant and happen randomly at a quicker rate. Meaning, you have to be well-equipped and prepared for any outbreaks. So having those vaccines researched should be your highest priority.

On Isla Matanceros, the first island you’re dropped onto, the island serves as your training grounds. You rarely encounter aggressive dino-illness and storms. Average by size, you can squeeze enclosures to rack up that dino-variety. It’s a perfect training ground for you to experiment while learning its gameplay curves.

Right before you can hop to the next island, completing missions and tasks given to you by divisions (Security, Science, and Entertainment Divisions) and pushing your park’s rating higher is the key to unlocking them. It forces you in a way that you have to go through missions that involves taking photographs of carnivores eating from the feeder, forcing a Dilophosaurus and a Velociraptor fight in one cage, and incubating specific dinos.

I, on the other hand, don’t have any problems with this approach. I like how the game gives you a reason to go through a series of main and side-missions for replayability, but if you’re the type who wants to immediately dive into the game without any gatekeepers, you will end up disappointed.

If you are wondering how you could go about making your own park without the need to do pop-up side-missions, Isla Nublar is your place. You get unlimited resources which you don’t have to worry about getting bankrupt. When you manage to progress by just a little, all the dinosaurs and facilities you unlocked will only be the ones available.

Player, Our Lives Are In Your Hands And You’ve Got Butterfingers?

Evolution is still pretty much similar to Operation Genesis. Build your own park, breed dinosaurs, to profit, and repeat. If you played Operation Genesis, the entirety of the game will immediately make sense.

What Frontier did was to make its core gameplay mechanics a little more in-depth. That includes the new Management View screen where you get to see if one of the facilities is gaining income or not, as well as the visitors’ needs. While you still have those vaccines, buildings, and upgrades to get from the Research Facility, the nice addition of genome modifiers is the real spotlight here.

The 2015 film introduced genome modifications. Aside from the frogs to rebuild the dinos core DNA in Jurassic Park, Jurassic World shows Henry Wu widened that capability and branched out to different types of animal DNA in order to enhance the dinosaurs’ features.

In Evolution, right before you breed and incubate your desired dinos, you can modify the dinosaurs’ skin tone, improve their defensive capabilities, and increase their immunity to diseases. Even if the game gives you that small amount of freedom, it’s disappointing that it lacks custom color customization. You only have predefined color tones to unlock but it’s unfortunate that you can’t even choose the color you want aside from the ones made available in the game. I wanted to recreate Blue from Jurassic World but I can’t because of the game’s limitations.

The facilities take an advanced step in Evolution. From the main operations facilities like the Ranger Station to repair damaged buildings, cure dinos, and reboot any sabotaged facilities; the ACU Station to tranquilize rogue dinos, the Research Facility for upgrades and unlockables, and Expedition Centers for the dig teams, each one has its own purpose in your park. The game also features power stations like other city-building simulators such as Sim City and Cities: Skylines. This makes the experience immersive because managing power and distributing them accordingly to your park’s needs is essential to this kind of game.

Like the first Jurassic Park film, there will be personnel from the divisions you work with who would sabotage facilities – they mostly target your power stations and enclosure gates. This added little quirk can be unexpected and it will keep you on toes all the time because you don’t want a Velociraptor eating your guests for lunch.

Managing your park’s income just got a lot easier in Evolution. As you go about your business, the fear of losing profit isn’t there anymore. In Operation Genesis, it’s all about making sure your visitors are having the time of their life. Making sure all the prices are right with your fast-food facility and gift shops, the viewing vents, the park entrance, even adding fees when they use the restrooms. It was difficult but fun, however, in Evolution, while they still exist on amenities, the dinosaurs are your money-making machine. So if you plan to invest in them than in clothing shops and bowling facilities, you’re perfectly safe financially.

Getting up close to an Indominus Rex or a Spinosaurus would be a dream come true. I’m glad to say that in Evolution you have the chance to actually be really close to the dinosaurs. It’s not just merely zooming in and out or riding a chopper or driving the ranger jeep, but riding the Gyrosphere in first-person mode.

Evolution shines the most with its visuals. You get to appreciate how Frontier managed to get every bit of graphical detail of the dinosaurs from the film inside the game.

Much like other animals, the dinosaurs you breed in Evolution have their own traits and needs. As you begin to incubate your first dinosaur to life, food and water are not the only things they need but also the kind of land they live and breathe from. Your dinosaurs will have to socialize with their own kind because these animals get uncomfortable if they don’t. They even panic at times when their enclosure gets a little crowded. In short, they are alive.

Take the Velociraptor as an example, they need fewer trees and more grassland. They also need to have other raptors in their pen to socialize. Because if you breed one Velociraptor in an enclosure, its Comfort meter slowly depletes in the area since it needs to talk and mingle with another raptor.

Once these dinos’ Comfort meter goes down its acceptable threshold they begin to panic and being to attempt to break out from their cages. It took me a while before I was able to understand the dinosaurs’ comfort stats. You have one category that reads “Social” and it doesn’t really give you any idea if the dinosaurs need to socialize with the same species or not. I know it’s part of the experience that you have to understand these sophisticated animals in the process, but it gets annoying that it doesn’t even give you a small hint of what you need to do.

It’s more fun taking care of your dinosaurs than your visitors. Evolution brings these dinosaurs you create to life. They have mood swings and get uncomfortable in certain situations. It makes dino-making in the process a lot enjoyable and entertaining.

No doubt, Frontier did an amazing job bringing the next-generation Jurassic Park builder. When you look at those superb dinosaur details and impressive user interface, you can definitely tell how Evolution looks really cool on-screen. While its graphics are insanely remarkable on PS4, the game’s overall performance was unexpected.

When your park hits at a point when you have about 25 dinosaurs, 1,500 visitors, and a hefty amount of facilities, the performance jitters randomly when you zoom in and out and move from one place to another. It gets bothersome when you’re micro-managing knowing that you’re playing on a PS4 Pro.

There are also frequent one to two-second freezes that happen around almost 30 minutes while I was playing. I thought there was a problem with my PS4 Pro, but when I had the game installed on a standard PS4 the problem still exists.

Hopefully Frontier rectifies this problem soon because it drags the game’s overall quality down. It’s better to have the graphics toned down a little than sacrifice its performance.

Frontier showed that they can do a lot more than just roller coaster theme park games. It’s amazing to know how studios push themselves to give out the best experience to players.

Setting aside the game’s performance since a future patch can fix it and it’s not entirely game breaking, Jurassic World Evolution never fails to amaze me when it comes to its variety of dinosaurs, deep gameplay mechanics, and incredible visuals. It’s a Jurassic Park builder you never want to miss.

(I’m still waiting for Jurassic World Evolution to become available in our local video-game stores so I can get it for my collection.)

Jurassic World Evolution - Review
Score Definition
May it be the likes of Shadow of the Colossus or Metal Gear Solid, if it’s quite there but not enough to push the boundaries, it’s still an awesome game.
Pros
Visually Compelling
Balanced Difficulty For A Park Simulator
In-depth Gameplay Mechanics
Gyrosphere First-Person Mode
Modify Dinosaur Genomes
Impressive Voice-overs From The Film's Cast
Cons
Frequent 1-2 Second Freezes
Frame Rates Inconsistent When Your Park Gets Bigger (even on a PS4 Pro)
Limited Color Customization For Dinosaurs
9
Excellent