In this demo, we look at the highs and lows of Mahokenshi and giving suggestions on its pacing 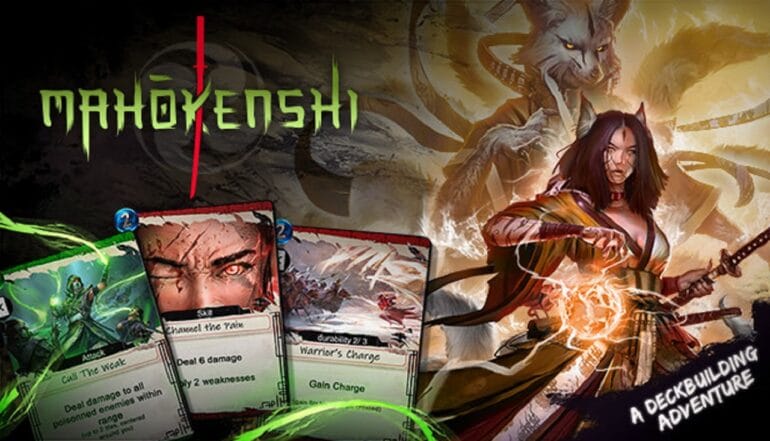 A deck building game with the theme of Samurai, that’s what Mahokenshi is supposed to be. What it was like while playing the demo, was something I didn’t think was possible – the demo nearly put me to sleep.

I was initially drawn to the game because of a card game I used to play, Legend of the 5 Rings. Mahokenshi reminded me of L5R with its Samurai theme and spell cards. The only difference was, playing L5R was very engaging. Mahokensi, at least in this demo, was not.

To the game’s defense, it didn’t start off that way. The demo’s first level did a good job with explaining critical bits of information like energy and how to use the cards. It was very straight forward in its approach, and it didn’t pause the game every few seconds to explain a new concept.

Before we go any further with the gameplay, let’s talk about pre-level prep. At the start of the level, we only have access to 1 of the 4 playable factions in the levels – the House of Ruby. Looking at the faction color, this is the clan that focuses on offense over defense. And I suppose the other factions will be unlocked through story progression or have the player choose 1 from the start.

The map we are on is a bunch of floating islands. Movement is based on a hexagonal grid. Moving in any of the 6 directions costs energy, and it usually just costs one energy to get to the next tile. But then there’s terrain to consider. Advancing into a forest tile cost 2 energy, and with having 4 energy at the start, I won’t be getting far if there’s a lot of forest tiles in one area. Thankfully, there are traversal cards that reduce the cost of moving tiles. Even the intimidating mountain tile (which takes 3 energy) is less intimidating. It just a matter of getting the right hand.

You are able to pick up cards on the way to the objective. Some cards are acquired via side quest, others are gained by random encounters on the map. It’s always a pick 1 card out of 3 scenario. I usually went with the ones that deal a lot damage. But seeing as I had tengu wings as one of my cards, so I also picked up support cards that gave me benefits while flying.

(It’s still the demo, and if anything like L5R, getting a detailed description of special cards for each faction could be time consuming. You’ll have to trust me on this one.)

Combat in the game is easy to understand. At the start of your turn, you draw 4 random cards from your deck. You would want to have combat cards in your hand as much as possible to deal with enemies on the board. There’s no point in free movement if enemies can take a swipe at you on your way out. To use a combat card, drag the card you want to use onto an enemy tile. Some cards augment stats while performing the action, while others deal damage over multiple strikes between 2 numbers.

Be wary of using powerful kill cards though. If you get surrounded on 3 sides by weakened opponents, weaker 1 energy cards are more effective than a insta-kill card that costs 3 energy to use.

The game is fun by design. My problem is that over the course of a single mission, it could take up many, many turns. There is no risk of deck out because the discard pile reshuffles back to the main deck once all cards have been used up. The problem is that the pace is so slow. It’s always – move a couple of tiles, wait for enemies to finish their turn, take 2 turns to kill one enemy, (1 if you get lucky with your hand.) and repeat the process all the way to your objective.

I know it sounds like I’m dunking on a demo of a game that just needs to rebalance some numbers. But in this state, that’s how I feel while playing the game. Nevermind the fact that the world itself is vibrant and the cutscenes make you want to act with urgency, if the game is slow, it’s not going to increase the pace just because the on-screen action looks awesome.

Going back to the demo, after reaching the abandoned village tile, we watch a small cutscene introducing a new enemy, goblins. These annoying bastards are just the worst. They have a skill that increases armor for a couple of turns. This effectively makes them tankier, and harder to deal with. Worse still, whenever they take damage, they acquire a single piece of armor. It doesn’t matter much when using multi-hit cards, but common slash cards are near useless against them. And there’s their attack… which is a poison strike that doesn’t do much damage, but slowly kills you with non-stop poison. This is the stuff that makes me want to go all Goblin Slayer on their collective asses.

Anyway, for this encounter, it didn’t matter all too much effort to bring them down. It was late in the level and I had already acquired decent cards.

It was the second level that truly grinds my gears. See, the next level starts with goblins. And our objective is to destroy 3 spawning pools that constantly spit them out every 5 turns or so. And all they are all located in different corners of the map.

Remember the thing I said about them gaining shields pretty quickly and poisoned attacks. Yeah, couple that with a starting hand that’s half movement cards and half basic slash attacks. Needless to say, that was the point in which everything ground to a halt. It took me nearly 3-4 turns to kill a single goblin and my RNG was so bad that the first free card I picked up was a movement and strength buff. Handy for setting up strikes, bad against shielded goblins.

After getting stuck on mountainous terrain and losing 3/4 of my health to constant poison damage. I had to call it quits. Maybe I could have done something different. Maybe If RNG didn’t royally screw me over. Perhaps overcoming that level might not have been so taxing.

To close out, I’d say the underlying idea was good. The circumstance in that second level were not ideal, but here’s the thing. This is my feedback to the developers. Please, give more energy for us to use. If not, make it so that the House of Ruby have a higher chance of getting red attack cards. Other than that, just nerf the goblins’ armor stat. Please.

Will be seeing how this game progresses when it releases in Early Access in early 2022.

For more information about the game, check out our previous article about its Steam Next Fest debut. You can also wishlist the game right now on Steam.