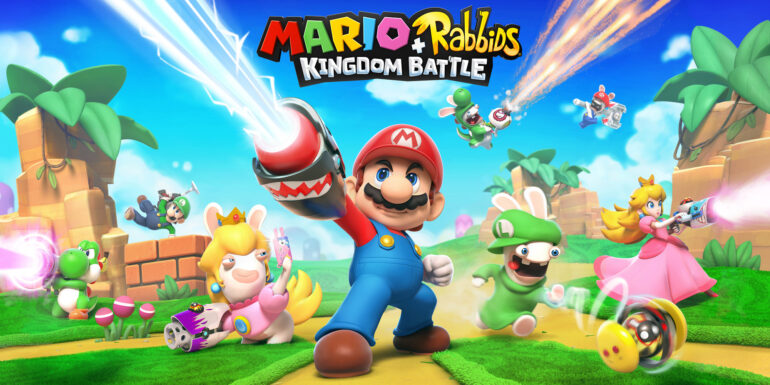 When the news leaked earlier this year that there would be a Mario Rabbids game, nobody was quite ready to believe it and the leaks were met with ridicule. Once people saw the gameplay and trailer though, it was a completely different story. And who else expected Ubisoft to come up with a Mario shooter, of all things? 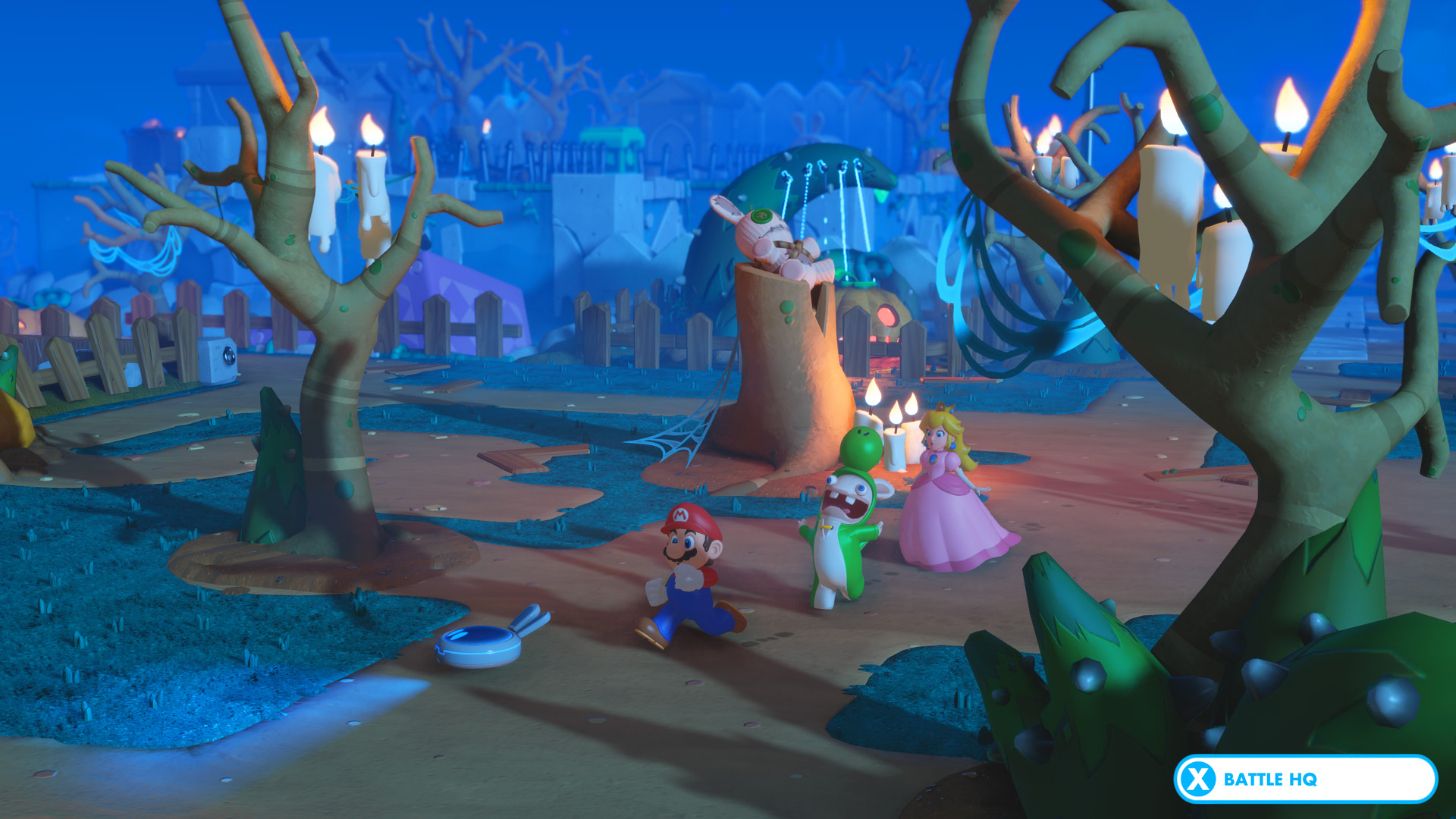 Kingdom Battle is a simplified XCOM-style turn based shooter, with most map objectives involving defeating a set number of enemies or reaching key points of the map. Players are thrown into a chaotic world where the Rabbids have not-exactly-accidentally unleashed a chaotic fusion device (which itself has been fused to a Rabbid) into the Mushroom Kingdom, tearing things asunder and putting them back in ways that are horrifyingly funny. The premise is pretty standard – there’s a problem somewhere and Mario is off to go save the day with the aid of some very unlikely heroes including a talking roomba (no, I’m not kidding.). Prepare to explore a Mushroom Kingdom like never before with toilets, underwear, self-aware humor and dialogue, oversized office supplies, and lots and lots of Rabbids. 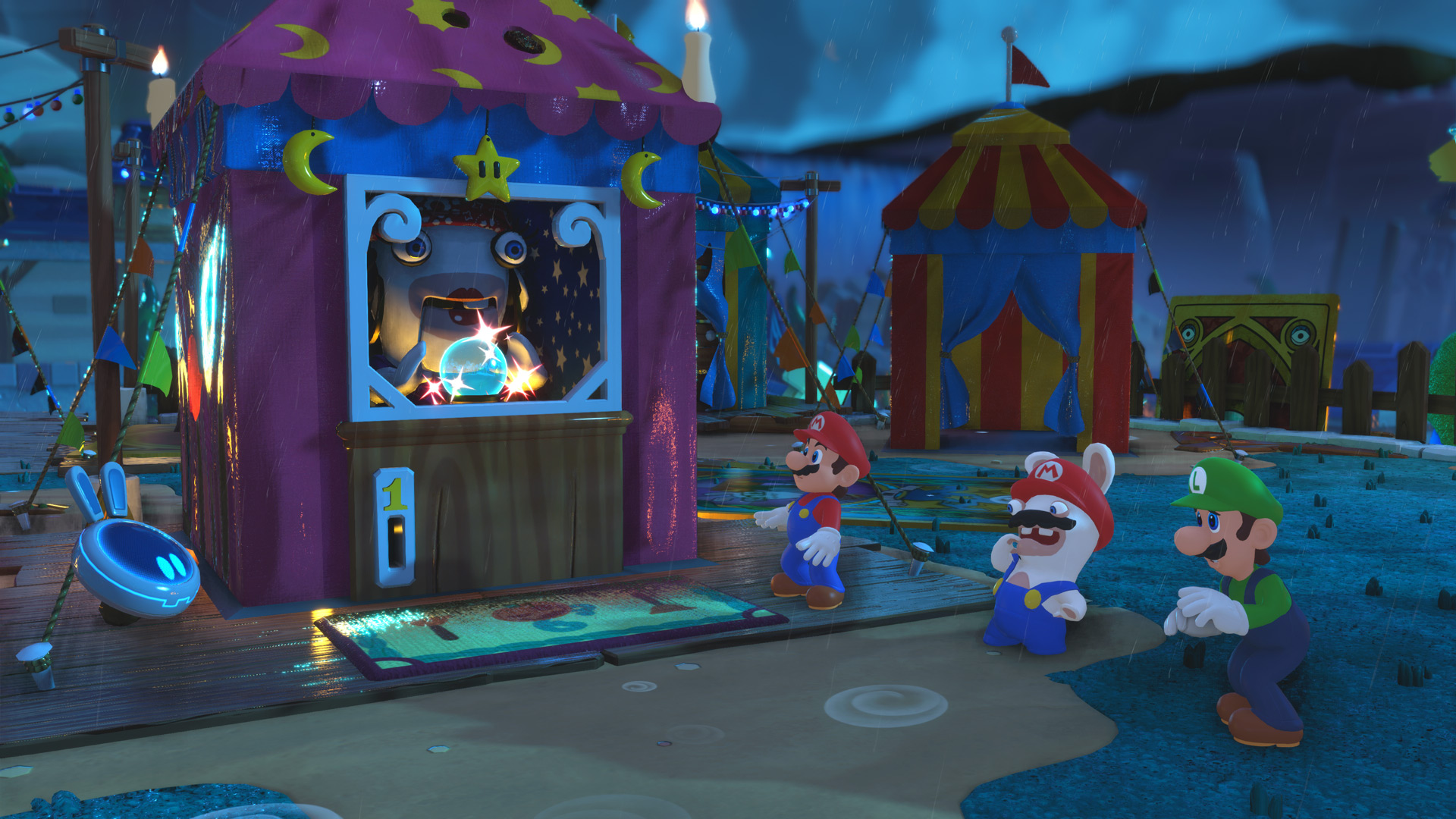 Combat is surprisingly solid! Where in XCOM and other similar games there’s a tactical advantage to be had with knowing how your enemies move and how to lure them out to be shot, Kingdom Battle encourages aggressive gameplay, giving players a surprising amount of offensive and mobility-related abilities. Foremost is the Mario signature Team Jump ability, that lets you jump off your teammates’ heads to reach higher locations or those you wouldn’t have had access to on foot.

Luigi, who uses a sniper rifle(?!) in the game, gets an ability to do this twice – he can reach the opposite end of a map VERY quickly. Mario himself can also jump on enemies to damage them after accomplishing a team jump, and this lets him reposition fairly well! Characters also have a free melee attack that they can use to whack people within range, and the oddly adorable Rabbid Luigi inflicts a lifesteal debuff on targets he dropkicks in this manner. 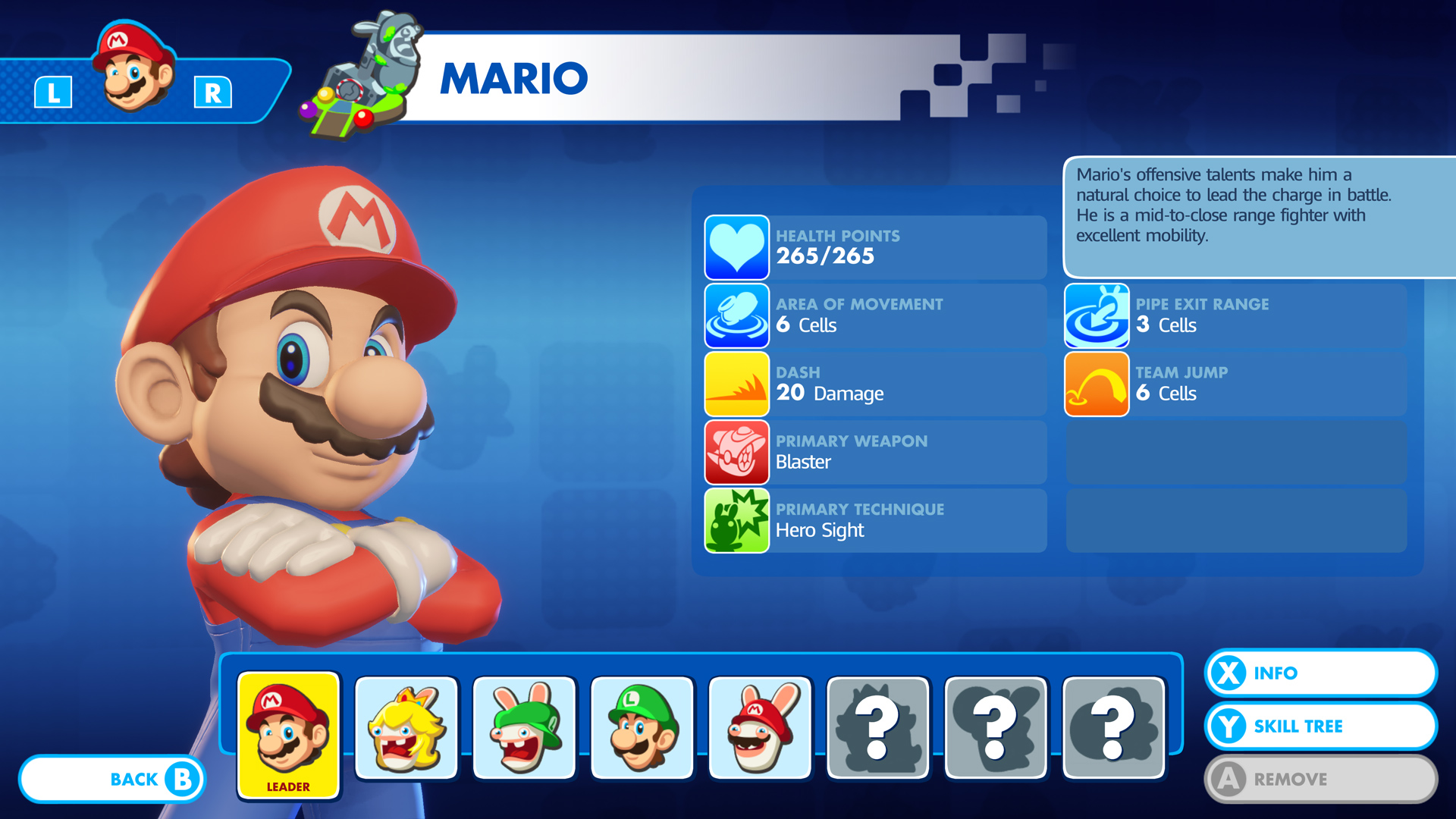 Both the Rabbids and the main cast compliment each other nicely – the Rabbids are often caricatures of their Mario counterparts, with Rabbid Mario chomping pizza and flexing like the mustachioed strongman he is and Rabbid Peach takin selfies every 15 meters. You can even see it in their animations, with Rabbid Luigi looking cautiously behind corners and Rabbid Mario just leaning against cover like nobody’s business.

Each character has a unique weapon and skill  set and these more or less define their kits – Rabbid Peach is a mobile support unit with a blaster weapon and a strong AOE heal, while the much tankier Princess Peach is a frontliner with a shotgun and grenades with a healing passive on team jumps. (I need to find whoever gave her this kit and shake his hand.) Combatwise, the Rabbids mostly pack supportive and defensive abilities like shields and debuffs, while the main cast has offense – all the main Mario characters have Overwatch-type abilities that can be comboed off to spectacular results. 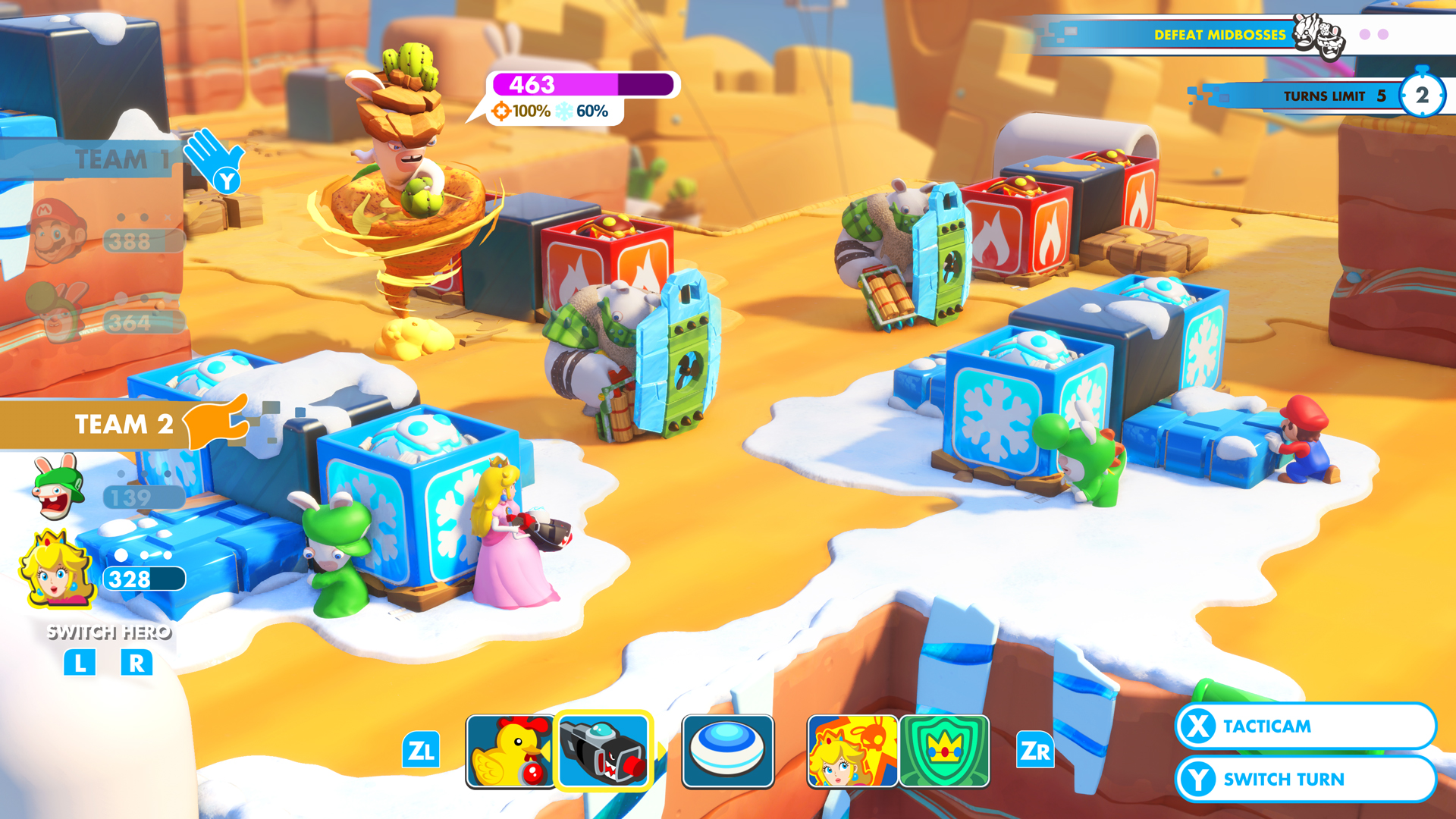 While I’m not exactly a veteran of the genre, I can say that the game isn’t incredibly difficult – but very challenging to unprepared players. It does ease you in gradually at the start and there is a definite learning curve. Combat feels great, and is surprisingly forgiving as the game lets you reset encounters if you make a wrong move. If you’re like me and want to clear things without your units dying  will be doing this frequently as there is no option to take back moves you’ve already made (which happens with surprising frequency – I’ve misclicked on tiles I want to move on more times than I can count.).

There’s also elements on the field that you’ll want to pay attention to, like tornadoes and Chain Chomps, while other elements have been cribbed straight from the classic Mario games – you can get knocked out of the stage by some attacks, set on fire, have ink splattered on your face and get glued to the ground in a deluge of honey.

It feels EXTREMELY good to see a combo come to fruition, like when someone scores a critical hit that bounces the enemy into the air, only to proc several Overwatch abilities from the other party members nearby – sending the enemy’s HP to zero before he hits the ground. Did I mention you can proc these on the same turn? There’ll be moments where you watch Mario solo-shred a large unit’s health down with three shots in one turn, and there’s moments where you’ll see his Rabbid equivalent mow down three huge enemies with a single shot of his mini-cannon. 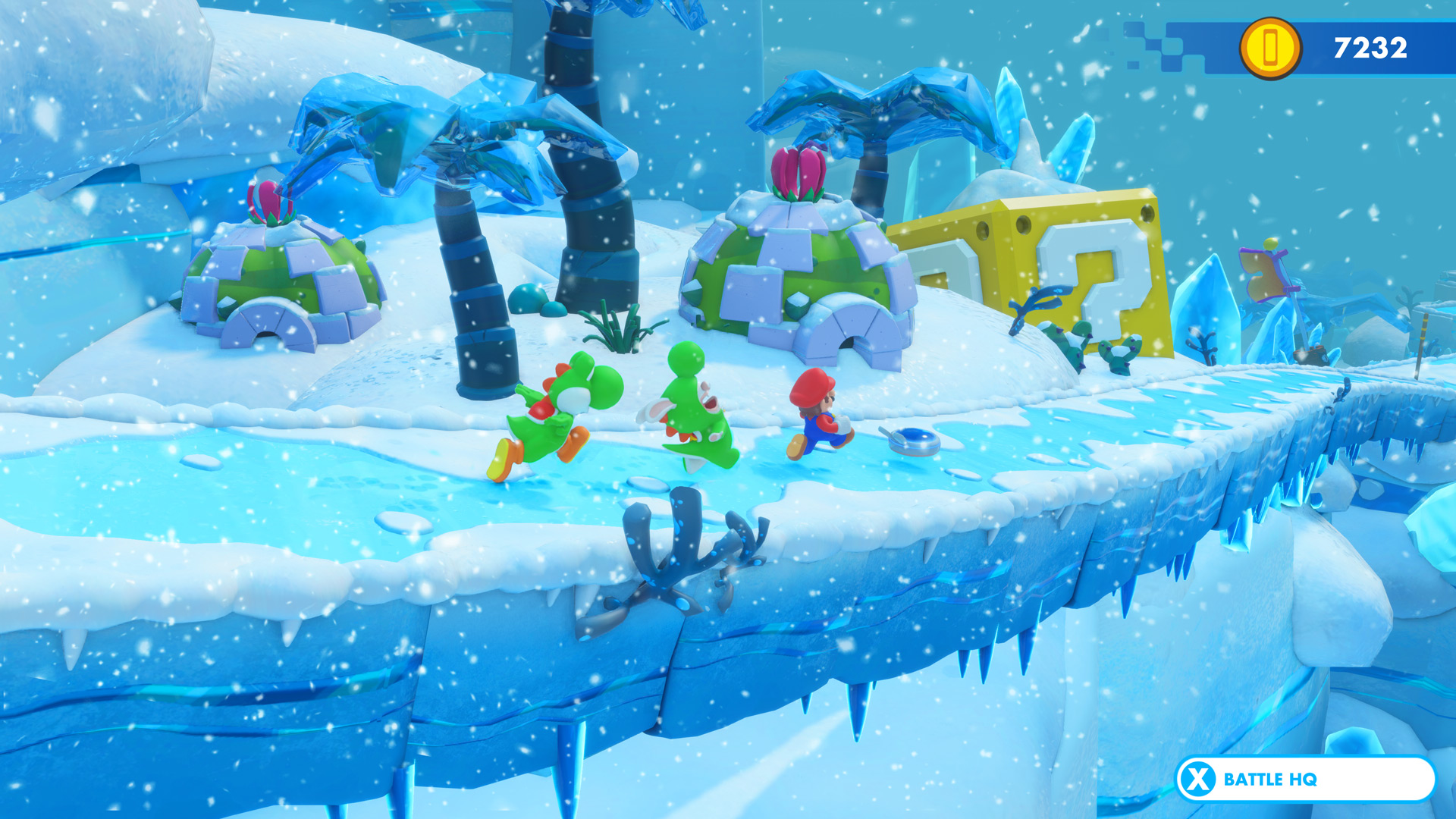 One thing I do love about combat is that it doesn’t take place on some far-removed map. You can see the features of the Mushroom Kingdom DURING combat, and notice things like Overworld chests and other hidden areas that you can come back to later to investigate. And how – the world is littered with pipes, switches, chests, bridges, spooky statues and more, with lots of sights and sounds to see along the way.

The game lets you revisit areas you’ve already cleared and retake challenges or try out new ones after you’ve cleared a wing, and you’ll want to farm for more coins and skill orbs to upgrade your units. (Yes, there are skill trees! In a Mario game!) You can also try the co-op mode and play with a friend. 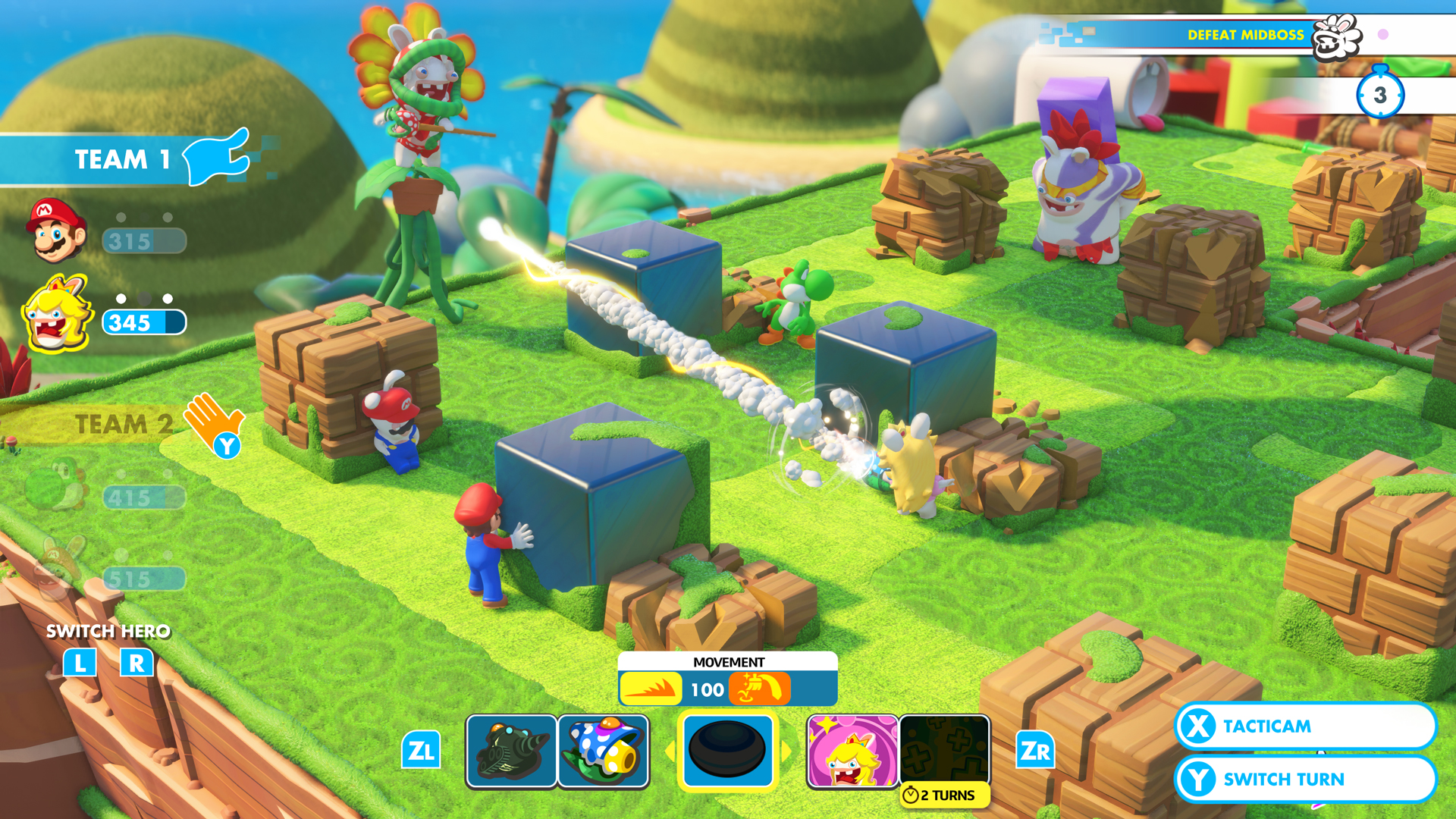 More fun than anyone ever expected, and then some. One of the few Switch titles worth owning – a weird one, to be sure. If you haven’t bought a Switch yet, this game and Breath of the Wild will be worth it. 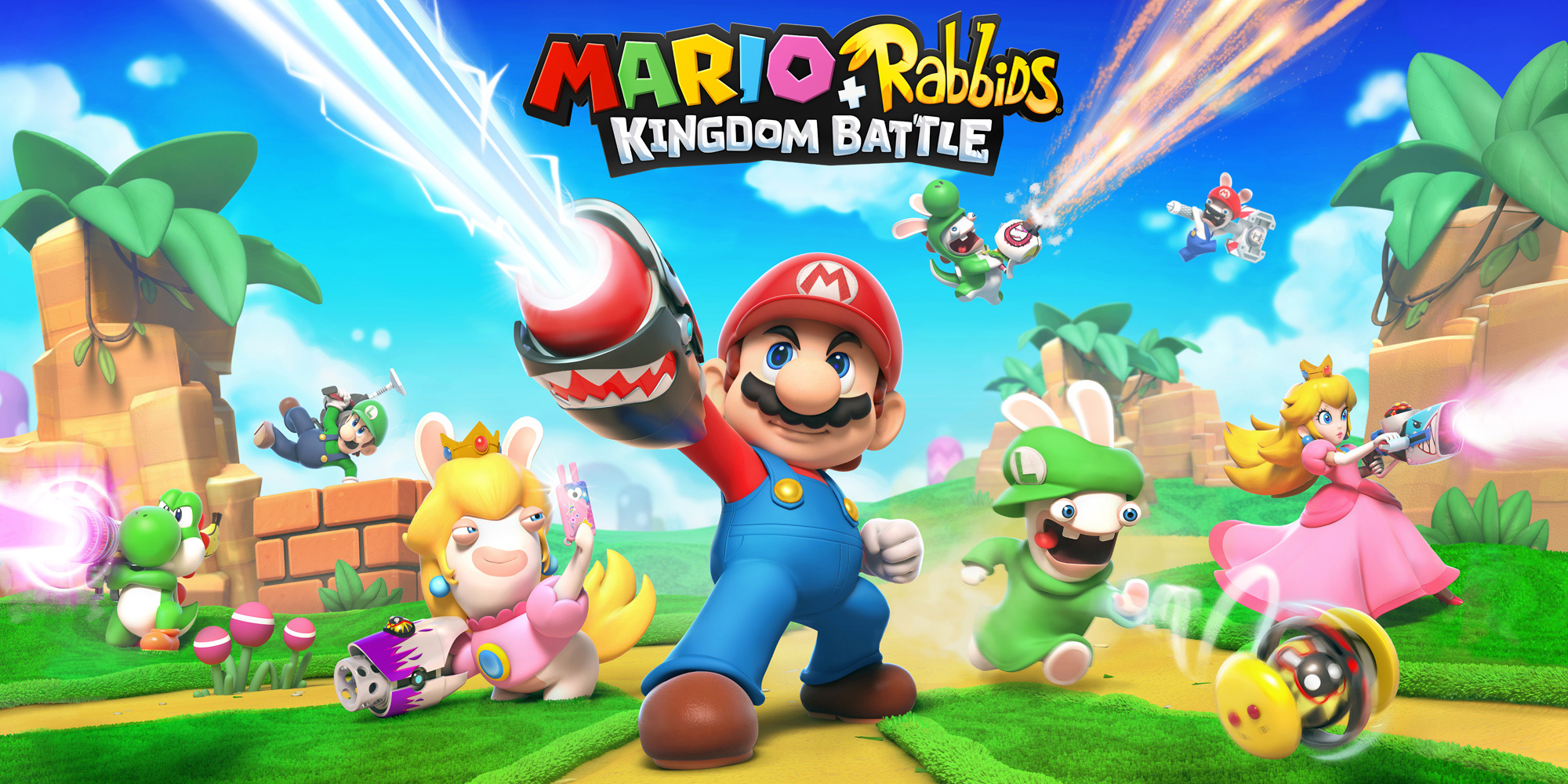 Mario + Rabbids: Kingdom Battle - Review
Score Definition
When the issues of a game are rolled and stomped by its greatness, then it’s something to invest on if you have some spare.
Pros
The Game is challenging in a way that encourages creative play
Rabbids are terribly endearing
game story and dialogue are self aware to an unprecedented degree
more than one solution to every challenge
Cons
graphical issues
Exploring the Overworld can be tedious
Mechanics can get surprisingly complex
8.9
Great