It's just the first trailer and the hype is already so over the top! 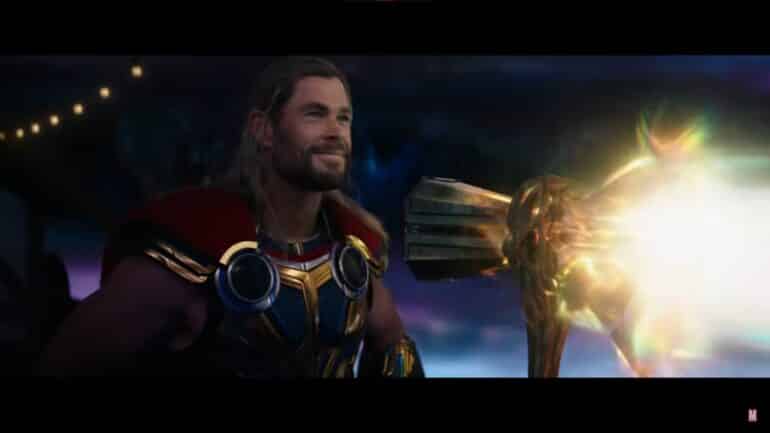 It is finally here guys: Marvel Studios Thor Love and Thunder trailer is up and it shows a ton of stuff to look forward to.

The first trailer of Thor Love and Thunder has dropped and it has tons to show with first on the list is Thor’s growth from being a royal child from Asgard, to becoming Thor, to his new Thor look, and then this scene ends with him putting down Stormbreaker and meditating. He was lost and now he seems to have found a purpose in life, a goal he wants to achieve.

“These hands were once used for battle,” says Thor in a voiceover. “Now they are but humble tools for peace. I need to figure out exactly who I am.”

We also see how he has taken off all of those fat by doing battle rope exercises with a chain from a certain giant. He is also shown being part of the Ravagers crew with his own attire and Peter Quill not having it. He is in some sort of battle with the Guardians of the Galaxy crew while he stands on top of a rock while the others hide from projectiles.

Thor also says his “superheroing” days are over. Or is he?

After this we get to see him riding on a floating boat going to Earth and a glimpse of possible Zeus and Olympus. Zeus is holding his mighty lightning bolt and waving to the crowd, but his face was now revealed.

New Asgard is now modernized with Valkyrie as the King or possibly now the president (?) wearing formal business attire with the rest of his cabinet.

In one bit, Peter Quill talks about the ones that they love and saying that “you only need to look them into their eyes.” With Thor trying his best to get in his sights, but Quill quickly rejects this with Thor being such a “tsundere”.

In the last part of the trailer, the Mjolnir is shown to have been miraculously put back together and now in the hands of a new Thor, the Jane Foster version. Natalie Portman looks to have been putting up a lot of muscle as she rocks the Thor armor. Thor, of course, is stunned that she is wearing his looks and also, how was she able to put back all the pieces back of the Mjolnir hammer? We will know later when it hits theaters in a couple of months.

Marvel Studios Thor Love and Thunder will be in theaters on July 8, 2022.