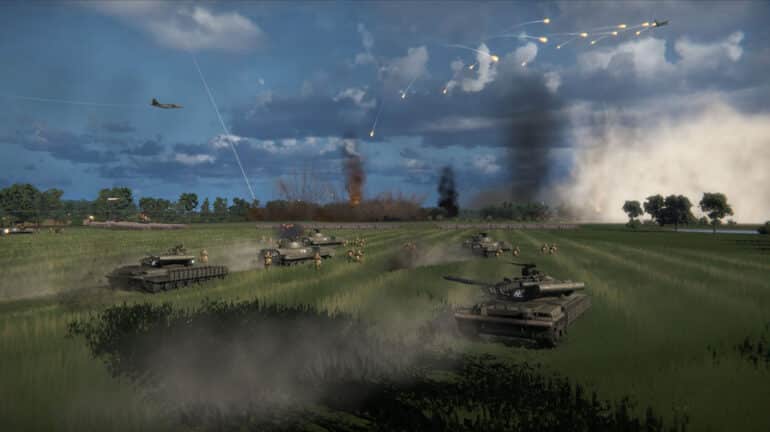 Publisher MicroProse has announced that their new Cold RTS, Regiments, has an Open Playtest Build. The playtest is available to try on Steam. Along with the test is a new trailer introducing Operation Firebird, the main mode.

The new Operations game mode is the focus of this playtest. In this mode, players lead a regiment through days of grueling combat over several maps, making tough decisions and bearing the full weight of the consequences.

Operations feature a high level of persistence. All the changes that happen throughout the battle including all the losses, the positions of deployed platoons, and engineering obstacles are recorded as they were. Even the wrecks and the scarred terrain remain between battles on the same map.

About the Game: (from the game’s Steam Page)

It’s 1989 and the flames of a New War are flaring up. Thousands of square miles of German landscape will become a stage for sweeping battles between the best NATO and Warsaw Pact has to offer.

Lead your Regiment through the inferno of a wide-scale Cold War conflict in this new Real-Time Tactics game. Break through the lines, call in artillery and air support, maneuver, feign retreats, and stage mobile defenses. Do not relent.

The Platoon Command system lets you orchestrate battles with unprecedented precision and ease. No need to micromanage every infantryman – you’re a Commanding Officer, not a sergeant.

Form your force on the fly. Selecting the main Regiment is just a start. You can expand your army during the game by calling in unique Task Forces, each bringing its own equipment and off-map support options.

Regiments is set to release on PC (via Steam).