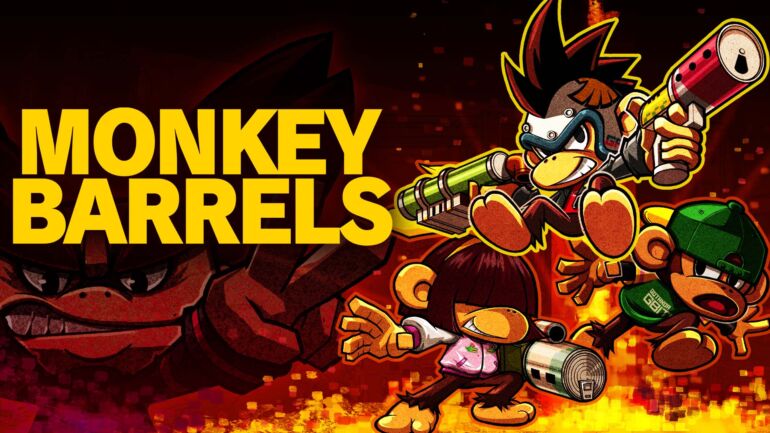 The hit action shooting game will be coming to Epic Games Store this coming February 2021. The PC version will offer a suite of customization options like mouse and keyboard support, player-defined key bindings, and multi-resolution support. It will also feature cross-play with the Nintendo Switch version.

The PC version of MONKEY BARRELS is available for pre-order beginning today. To commemorate its release, players can take advantage of a 40% pre-order discount and purchase the game for only $8.99 (tax incl.) during the Pre-Purchase period. Optimized for PC and more accessible than ever, there’s never been a better time to jump into MONKEY BARRELS!

■What’s new for the PC version: To accommodate a wide range of systems and ensure an enjoyable experience for PC and console players alike, we are delighted to introduce the following features to the PC version of MONKEY BARRELS.

・Cross-play with the Switch version

The Banana Scramble multiplayer mode, in which up to six players compete, features cross-play with the Nintendo Switch version of the game, allowing you to go head-to-head against other players around the world, regardless of platform.

・60fps and resolution options combine for even more stunning visuals

At 60fps, the game’s gorgeous 3D pixel art graphics and intense action are more enjoyable than ever. Plus, no matter your display, the game has you covered with complete resolution support.

Players can use either a controller or mouse and keyboard. The game’s controls are also customizable, allowing you to tailor them to your system and play style.

To mark the release of the PC version of MONKEY BARRELS, the game will be available at $8.99, a 40% discount, during a Pre-Purchase period.