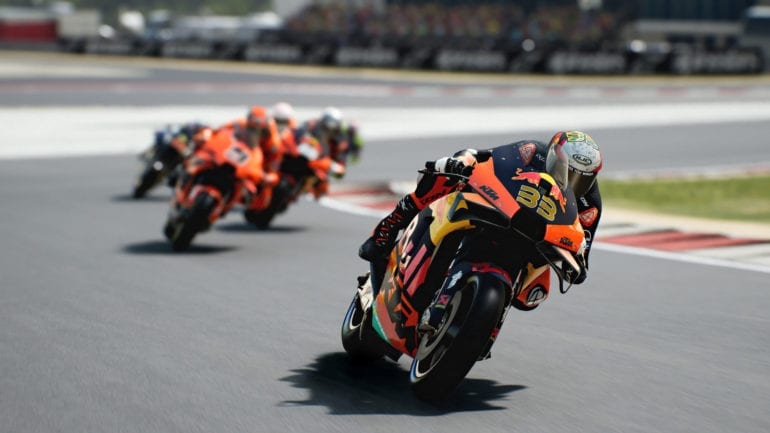 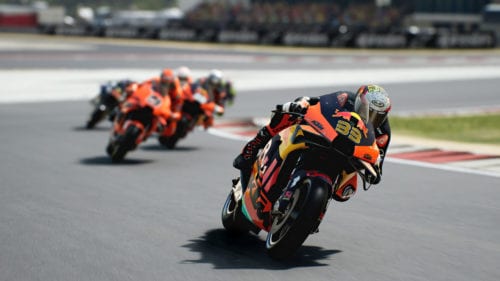 Offering up what is the most immersive and realistic 2-wheel racing experience on the market, Milestone’s MotoGP is the go-to franchise for fans looking to elevate their motorcycle racing game experience. With rich attention to detail in its complex racing and driving mechanics, there is a lot to love about the long-standing series if you’re a fan of the sport. Feeling the wind in your helmet and leaving rubber on the track is what the MotoGP series is all about and this year’s installment is no different, however, it does very little different from last year’s game.

Equal parts challenging to learn and fun to play, MotoGP’s driving mechanics are a tough nut to crack. Upon first launching the game and getting ready for a weekend on the track, new players will quickly find out that the driving in this game is not akin to the mechanics of say GTA. The MotoGP series is a whole different beast in the world of video game driving compared to the more standard and simple mainstream offerings and to the uninitiated could be a daunting task to learn the intricacies of how MotoGP operates. Lots of thought goes into the process of braking, turning, and accelerating; with multiple variables all being taken into account within the game’s excellent physics engine, a few of which include weather conditions, weight distribution, and bike inertia.

Even the most minute details, like the newly added brake temperature feature, can impact the way you play. Also new to MotoGP is the ability to retrieve your bike after you take a rough spill. While this little feature is neat for the immersion, it makes me wonder why this was at all necessary to include when the AI is immune to this feature and simply respawns directly after a crash, putting the player at a direct disadvantage. Milestone is clear in its goal to present a simulation-like racing experience instead of the more arcade-like offerings presently on the market. Hardcore fans will be pleased with just how much detail goes into the handling and how good it feels to control your bike on the track. Lengthier game modes include skills trees tailored towards your bike with upgrade points which are earned as you ride making the process of sticking with your machine quite rewarding.

The mechanics are still a lot to manage and for new players, it is a real challenge to learn it all. Luckily, MotoGP gives you the flexibility to dial down a lot of the mechanical complexities of the game. There is even the option to enable a handy visual aid that presents itself along the track which will direct you in how fast or slow you are supposed to be taking a turn and it works well for adjusting to MotoGP’s physics engine. A novice player can quickly start carving out turns like a pro with this tool. Turning down some of the more challenging aspects of the games never took away from how good it felt to ride. New to this year is a robust tutorial system that will introduce the basic game mechanics to get you rolling at first and then a separate section of tutorials to get you acclimated to the more advanced game mechanics. The tutorial is a welcome addition that will get new players feeling comfortable and confident behind the handlebars faster than 2020’s game.

MotoGP 21 is an incremental update to 2020’s game that refined Milestone’s Neural AI 2.0, a technology first introduced in MotoGP 19 and intended to fix the problem of their stale racing NPCs by creating unique, dynamic AI that reacts more aggressively or passively to what the player is doing on the track depending on each AI’s attributes. Milestone has seemingly left their newly created Neural AI 2.0 untouched for this year’s game, leaving well enough alone, and seem to also have left their graphics department untouched this year as well, disappointingly.

Milestone is no slouch when it comes to crafting beautiful and detailed bike models that come to life in the midst of a race, however, character models and world detail leave a lot to be desired. Character faces are flat and bland with some really barebones customization options for how your character looks. The overall player model looks decent, if not a bit smudgy at times. At a distance, everything looks good but in the brief cutscenes and close-ups during customization, the texture work comes undone.

Considering how MotoGP 21 is practically identical to last year’s game, graphics could have been an area where more effort should have been shown. Luckily MotoGP outfit itself with a really impressive amount of customization, outside of the weak character faces. You can really make this game your own with plenty of options to create and customize your own teams, bike, suit, helmet, numbers, and even the stickers on your bike and suit. Bike customization in particular is very in-depth with options down to the gear in how you want your transmission to feel, gearheads rejoice. Spending an hour creating your own racing brand, making your racer look dapper, putting the finishing touches on your bike, and then seeing yourself zip down the track to victory is a joy. Milestone does a good job at personalizing your experience.

World design on the other hand could use a bit of work; the tracks themselves are not very lively. Under the right conditions, like during a rainstorm where the shine of the asphalt is broken by a motorcycle at 180 km/h and creating a splash of particles, it can look great, however, in most scenarios the game world just looks flat and boring. This is a real shame because there is a bounty of locations in this game with tracks in Qatar, France, the US, Australia, and Thailand just to name a few but nothing is ever really done to make these locations unique from one another. It is a real missed opportunity for some variety in this game. The tracks all vary in design but after a while, the backdrops just start blending into one another, I couldn’t tell you if I’m in Spain or Australia on any given track.

MotoGP has some limited choices when it comes to unique game modes to keep players coming back. The star of the show here is the career mode, where you create your own racer, join an existing team, or create your own, and start at Moto3 then work your way through Moto2 and reach MotoGP all while trying to balance and manage teams, contracts, money, and managers. This mode is fun for a bit of roleplaying with the process of starting from scratch and building up your team and bike being very rewarding but it is still very similar to last year’s career mode.

There is also a Grand Prix mode where you can choose from a roster of 22 riders to compete as, as well as your own custom riders as well as a time trial mode and a custom championship mode. In the way of single-player offerings, there isn’t a whole lot here to keep you coming back. Though MotoGP is sure to keep players hooked with its multiplayer mode; no AI, Neural or not, can compare with competing against real players.

MotoGP 21 is a great choice for newcomers to the series as it introduces a rigorous tutorial mode that will get you playing and having fun in no time. However, returning fans might be disappointed to see that this year’s MotoGP game is mostly the same as last year’s with an included bike retrieval mechanic. Overall MotoGP 21 is still the premier motorcycle racing simulator on the market with the best feeling racing experience for both newcomers and veterans. 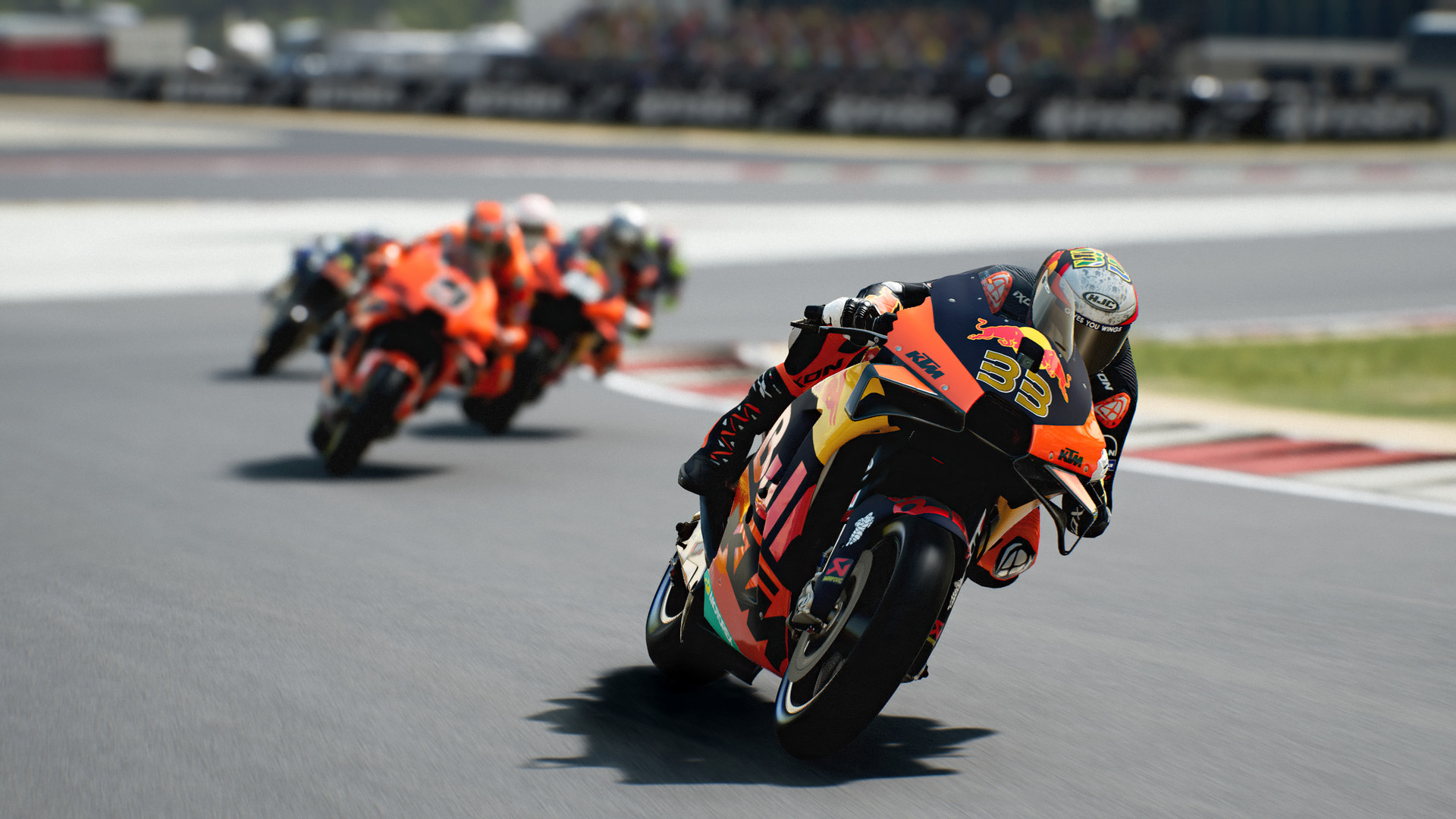 MotoGP 21 – Review
Score Definition
We tell you, it’s a good game! It’s not average! It might have some problems here and there, but you have to admit it is a “Good” game.
Pros
Extensive simulation-like game mechanics
Crisp handling
A bevy of customization options
Excellent tutorial system for newcomers
Cons
Mostly untouched game from MotoGP 20
Limited game modes
Flat Visuals
Uninteresting tracks
Questionable new bike retrieval mechanic
7
Good