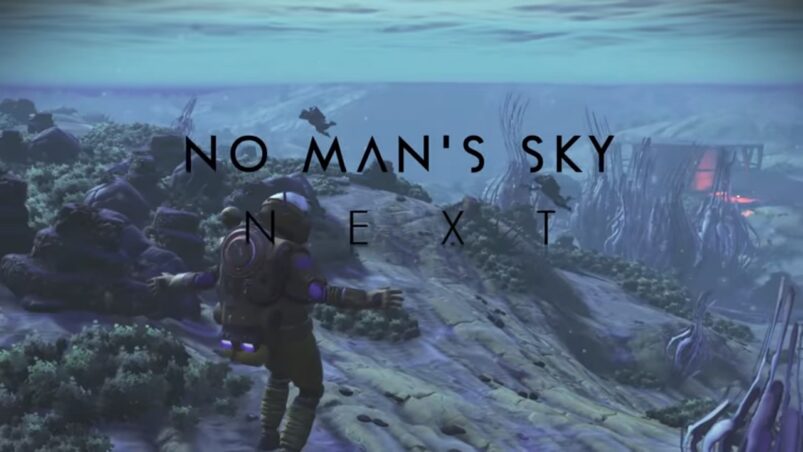 After the big loss and large negative feedback for the early builds of No Man’s Sky, this video game has finally gotten one of its biggest and most needed updates of all: NEXT. Finally, finally it has become one of the best games to play this year and definitely a recommended one for everyone. Well, it still has its problems though. So here are some details before we go on.

The updated visuals of No Man’s Sky are greatly enhanced thanks to the NEXT update. I played the Xbox One version so it is pretty toned down with some slow loading visuals, but once it does, wow… breathtaking. Compared to its early versions, this one is a million miles away. It is way better and I confess, it’s one of the reasons why I came back and played it again. I saw some videos of the PC version and it is highly detailed. The Xbox One version in my experience is a bit toned down in details… just a bit.

The animation of the characters is fluid and the FPS is quite good. There were some loading issues with the visuals, but that’s not something to be bothered with for me. I’ve played games with worse loading problems and this one is harmless. It is still noticeable though.

The idea of a third-person view is awesome too. Finally, we can see the changes in our characters when we do customizations. We can also see what we do when we fire a gun, mine for materials, and more. The aliens talking with their weird language are just okay with their lip movement. Nothing super fancy and nothing super bad: just mediocre.

For visuals, I’ll rate this game with a 9. Upgraded visuals compared to the past versions, but the graphic loading issues are a bit noticeable.

Story: Still the same mystery main plot, but with tons of lore

I admit I’m not that deep into No Man’s Sky’s story yet, but I think it’s still the same plot: all mystery and not that much action. It’s a game about exploration and the journey towards the center of the universe, so I’m pretty sure there’s no super over-the-top story to follow with big villains and monsters to fight. Sure there are some aggressive alien monsters along the way and the crazy sentinels patrolling every planet you visit, but that’s just it. There’s no twist, there’s no depth because it’s all a straight path to the end.

The good news is that the lore of the game is pretty deep. A lot of side stories to explore and tons of messages and clues to uncover in most planets. Still, everything is shrouded in mystery that it sometimes makes you a bit frustrated since there is no sudden development. Well, there is some development but it just falls suddenly flat. And the ending might be the same as well so don’t expect much, just enjoy the exploration as much as you can.

For the story, I graded the game a 6. The main story is super shrouded in mystery that falls short in the end, but tons of awesome lore to discover along the way.

With the NEXT update, exploration alone in No Man’s Sky’s lonely universe has become fun once again. With the upgraded visuals and smoother frame rate, the gameplay is way better than the bland old version. There are tons of things to do that most exploration fans would love. The planets and galaxies are random too, which makes it somewhat a unique experience every time you land on another planet, warp to another galaxy, or trade with another space station. You can even fight space pirates if you like with your measly spaceship weapons or with upgrades.

The first thing that you would find in the beginning of the game is the different difficulties you can choose from and the other that allows players to just create on their own, like a sandbox mode. I’ll explain these modes better on the replayability section later.

When you wake up in the beginning, it’s a fight for survival right away. You will need new materials to charge up your weapons, your suit, oxygen, and protection against harmful elements like radiation. The higher the difficulty, the more likely you will die right away due to how quickly your protection wears away. As you rummage around, you find the needed materials and charge everything up and repair broken parts to survive. After that, you can now explore the universe at your leisure. It is really up to you if you follow the main story or you can just explore on your own. I like that, the freedom of choosing what you want to do and not forcing you to follow the storyline. Still, you are alone in your journey and you will have to build your base on your own without the help of others.

You will have to grind though and it will be a long journey to do so. There are some cheap and even free ships to get, but you will want to get those expensive ones for better transportation. You will also notice that there will be a limited amount of storage space for your suit and your ship. Don’t worry, just progress with the story or find other ways on your own, it will get unlocked if you just explore more.

I can’t list the numerous things you can do in your playthrough, but I can give you one good advice: explore, explore and explore. Talk to aliens, visit a space station, explore the planet, trade with other species, destroy sentinels… It’s all up to you. There are some slight bugs and issues here and there, but it does not really bug me at all. Just be careful with some patches and even your installation on Xbox One. Mine got bugged, but it was fine once I reinstalled the game.

For single player gameplay, I graded this game with a high 9. The freedom of choosing your own journey and the vast amount of things to do is a big plus for me. A few bugs and issues were the only demerits for this game.

*note: impressions not mine. Credits to Lex and Kim

While single player is fun to explore on your own, it is still a very lonely mode for No Man’s Sky’s players who like the company of others. Good thing the NEXT update introduced multiplayer and thus made playing with others a reality, but there are kinks. As reported by my friends, the multiplayer section is still buggy, crashes tons, and they get a lot of disconnected sessions. Some blame it for slow internet connection, but when we tested other games with multiplayer, they had smooth gameplay. Maybe the servers of Hello Games are not that in optimum states yet or there might be some coding in the game that needs some ironing out. Anyway, the experience was not that great with multiplayer.

For multiplayer gameplay, I rated it a 4. The feature had good intentions, but it backfired during its early stages. Hopefully this will change in the next few updates that Hello Games will release.

Music: Quiet and slow, but somehow it fits

As most have noticed, the music and sound effects are pretty much the same from day one of No Man’s Sky, but somehow it just fits. In my entire playthrough, I didn’t get bored by listening to the serene and quiet soundtrack while exploring. It does however spike into a somewhat fast one during fights against sentinels and other aggressive species. It’s all mysterious too when you first meet up with the being that summoned you from afar to find.

The sound effects are perfect too and are in sync in every hit and touch. Alien talk is all gibberish to me, but that’s to be expected since they are aliens. As I said, it all seems to fit.

For this category, I gave it a high 9. No delays, the soundtracks just fit the game, alien talk, and more.

Replayability: The freedom to explore easily or die too quickly

No Man’s Sky has three difficulty modes to choose from and they are all what I expected them to be. The normal mode is an easy way to enjoy the journey with the story. The survival mode is quite the challenge because I died right away as I woke up in the beginning and it was just fitting. You really needed to be quick on your feet or else you will die too quickly. The permadeath mode would be the hardest mode to try out because if you die, you will have to start all over again. All of your progress will be wiped and the hazards and dangerous elements will be increased compared to the survival mode. Only for the best players. The creative mode is the easiest and most relaxed version because it allows players to explore and create freely on their own. They have unlimited health and resources, and the building costs are zero. The problems are that trophies cannot be achieved and the story elements are gone. It’s just sandbox mode for those who want to try out everything without any penalties at all. This gives the game a very big replayability value since you have the freedom to choose whatever mode you want.

For replayability, this game has a solid 10. The keyword here is freedom.

Overall, No Man’s Sky has greatly upgraded from a very bad game to a very memorable one. This is the version that everyone was waiting for and Hello Games finally achieved that. A few updates here and there to fix issues, stomp out bugs, tweak some parts, make some changes, and additions would make this game better than ever. Oh yeah, please fix the multiplayer mode guys, it’ll definitely boost your review scores later on. 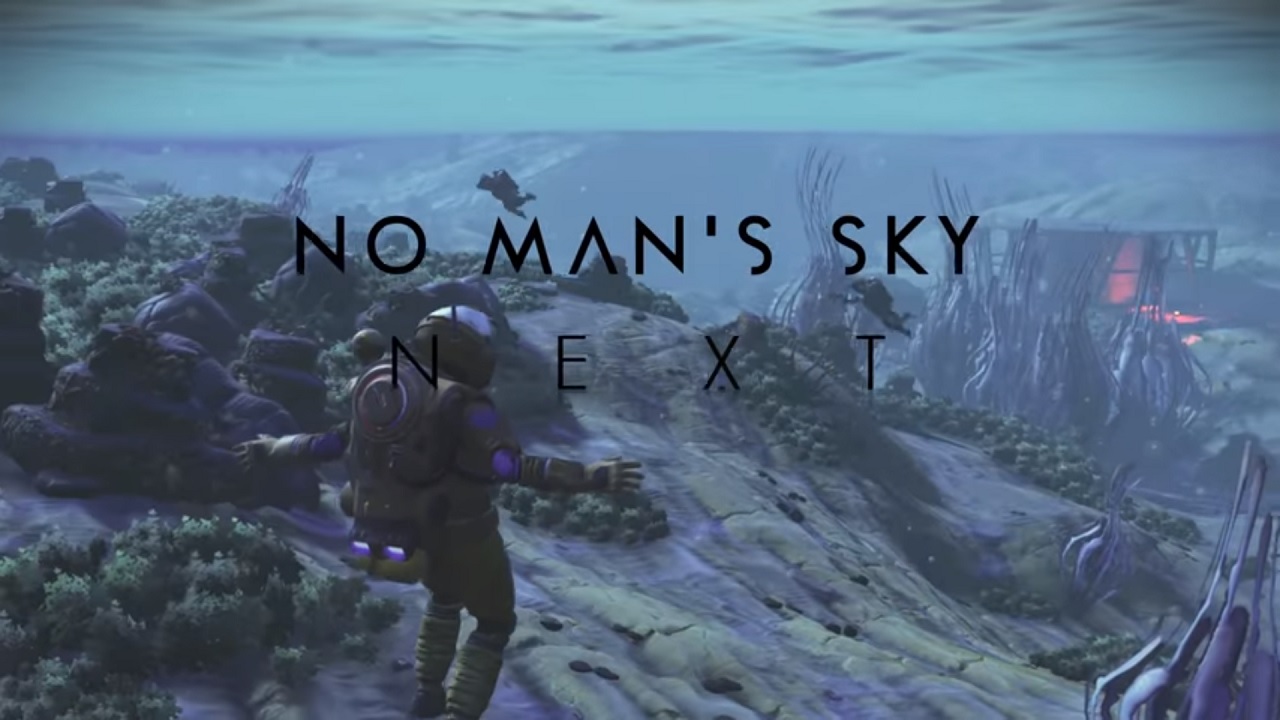 No Man's Sky With NEXT Update (Xbox One)
Score Definition
We tell you, it’s a good game! It’s not average! It might have some problems here and there, but you have to admit it is a “Good” game.
Pros
Amazing Visuals
Fitting Music
Vast Worlds to Explore
New Features
Freedom to Choose
Fun Space Battles
Mysterious Vibe
Tons of Lore
Cons
Story Falls Short
Slightly Buggy
Multiplayer Issues
7.8
Good