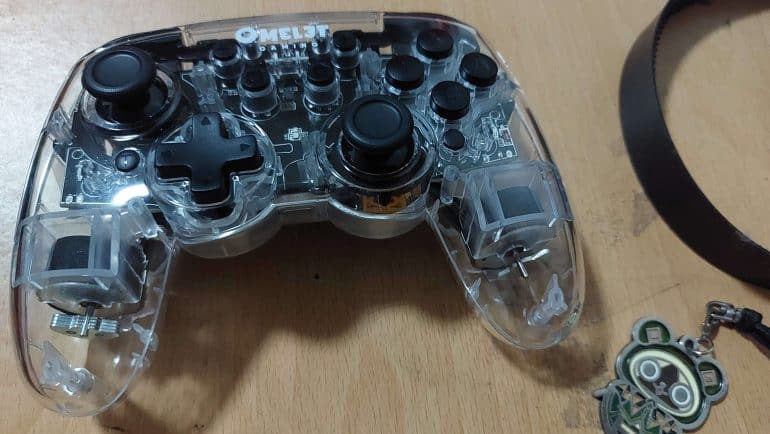 Ray here with another controller review, this time on the Omelet Switch Controllers with a review on two: The Wireless JoyCon Controller and the Wireless Controller in a single post.

Now, a bit of a warning, this is my first time working with this brand, and thus have no prior knowledge of their products. However, I will report honestly on my experiences with them as honestly as possible. With that out of the way, here starts the review on the controllers that left me quite half-and-half (get it?), for a lack of better terms. Time to see if this Omelet is well-done, or half-cooked.

The Wireless JoyCon Controller type is nice, with a larger surface to work with compared to the regular ones. Armed with the ability to map a button to its extra button beneath the grip, you can program it to have two inputs to help you in situations (there’s one on each side) where both a directional input or an L3/R3 input is needed but don’t want to press both analog sticks down.

They’re light for their size, but leave a weird after-use feel in my hands like this is strangely similar to another third-party controller, but that’s an issue I overlooked as I tested them on games that required a lot of frantic button presses and precise movements such as Daemon X Machina and Blasphemous aside from the Contra Collection’s games.

Let us start with its pros compared to a standard Nintendo JoyCon. It’s bigger and has lights on the analog sticks, which is a nice feature, with lights following your movements. You move them up, and the light follows and gets brighter while the opposite gets dimmer. It’s smooth and responsive which is a great positive point for me considering I tend to twitch-move a lot on shooters especially if the screen is full of bullets and the atmosphere is tense.

True to third-party controllers, it has a turbo function which is located this time at the back, and while it’s a questionable design choice as it makes activating it kind of a weird feeling as your fingers trace along the back trying to find the slightly-sunken Turbo button right below the Map one. Speaking of which, that button allows you to program/replicate a button to use, acting like an extra input of said button if you’re not into the previous function and prefer to use controlled fast presses instead of press and hold to fire rapidly.

Now, for its cons, or should I say, the SadCons. The D-Pad is stiff and a bit difficult to work with, at least personally for me considering I use that by default if it’s available for movement and cannot do diagonal input very well, or at least the one I got, but other than that, it still IS responsive and works quite well.

The other con it has is that the turbo button is sunken a bit and can be a bit tricky to find using just your sense of touch which might cost you a bit of reaction time if you do not drop your guard and get hit, at worse do it at the wrong moment and get hit a lot or lose a life, and at times they de-sync and re-sync to your Switch at random intervals, making a few playthroughs of Gradius on the NES Classics a bit of a difficult time, making me lose 10 lives altogether in an hour of a playthrough on multiple loops.

The last of my gripes would probably be that the Switch’s kickstand doesn’t work when you use this, but that’s minor at best.

The Omelet JoyCons are a decent pair to use, albeit it’s probably my third recommendation right next to Nyko or HORI JoyCons. It’s a good pair and with its good price of PHP2,295.00, it’s still a suggested product to pick up and play with, hopefully with years of service ahead of it.

Now we move on to the Omelet Gaming Wireless Controller, Omelet Gaming’s second offering to the gaming masses. It comes in various colors. (I got the clear one, it has that retro clear controller appeal that’s just irresistible) Aside from clear variations, with a pretty good price tag of PHP 1,795.00, this makes it an easy-access controller for those on a budget.

First off, the Pros of this ProCon. It features the same level of sensitivity and response speed as the JoyCon-type, which is always welcome and appreciated, with the same layout featured on them as well such as the extra mappable buttons and the Map and Turbo buttons, making usage a breeze when you switch (Ha!) between docked and portable modes.

Thanks to its USB cord, it can also be used on the PC with a MadCatz driver, but you’d have to re-map every button as the layout does get messed up like when I tried it on Wild Guns Reloaded and Cursed Castilla EX.

Next up are the Cons of this ProCon. It doesn’t have a sensitive D-Pad, mostly keeping the input to a single one even with a wave motion or a half-circle, maintaining the initial input. Maybe it’s more suited for a game supporting those, but it’s not for players used to the D-Pad. Steer clear of that and keep to the analog stick, and you’d go from either a bit miffed or a Frustrated Frankie.

At most, I’d say they’re a decent and affordable set of controllers to get, given performance is still amazing despite small kinks that still need to be worked out here and there. Omelet Gaming really did good on producing these controllers, and just might be the next hottest thing out there considering third-party controllers.

Omelet Switch Controller
Score Conclusion
It's decent, but I would probably be putting this in the Spare Controller bin. The greatest dealbreaker was the quite-unresponsive D-pad considering I rely on it more than the analog stick.
3.5