The opening act of a space opera 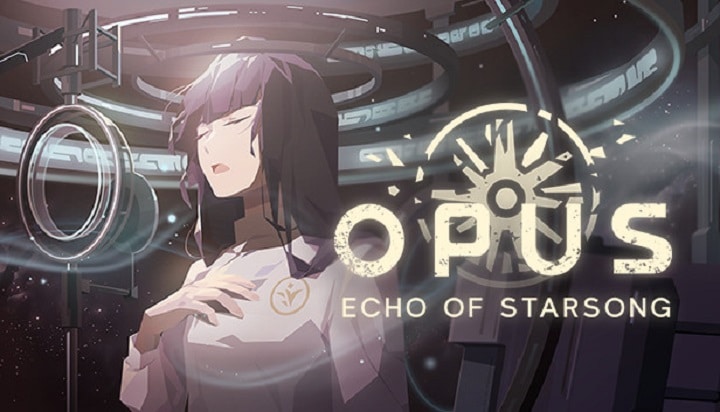 My initial assumption going into OPUS: Echo of Starsong is that it’s going to be a narrative focused game within the setting of a space opera. Judging from this short demo, I wasn’t too far off. Though what I didn’t expect to find in this demo was the last moment action set piece, and the high quality CGI cut-scene that accompanied the hand-drawn art style.

The demo starts with an elderly Lee, exploring a lost Lumen ruin, recalling the day he met Eda 66 years prior. By all appearances it would seem like the former head of the Yuan clan wishes to spend the last of days finding closure for something that’s happened in the past. It’s at this point we are introduced to the history of the world. Everything from the discovery of Lumen ruins in the Thousand Peaks system, the 20 year war over its ownership, to the turbulent times that came after. We first find our heroes making a living during the aftermath of the war.

A much younger Lee first encounters Eda in the bazaar where Lee’s party failed to negotiate with an information broker who sold them vague coordinates to a shrine. Eda saw this as a chance to lay stake to the claim. She claims they have a Witch with them, and through her, they could find the ruins. There is only one problem though. It was all a ruse set up by pirates to lure unsuspecting folks into their trap. Upon learning this, Lee is compelled to warn Eda’s party. Kay, Lee’s aide, begins to protest. But after seeing how determined his young master is with being honorable, Kay was left with no other choice but to comply.

As this is a narrative driven game, it took quite some to transition to something else other than exposition. The star map pointing at the bandit trap offered a glimpse of the exploration aspect the full game has to offer. From here, I suspect we go to various locations, piecing together a great mystery that’s begging to be solved. One quick look at the item inventory also reveals a section dedicated to ship components. Doesn’t take much to figure out that we’re also going to be on the look outs for premium parts too.

The infiltration segment shifts the gameplay into a third person exploration puzzle solver. Using a device called an echo synthesceptor, Lee is able to replicate the song of stars Witches sing to activate Lumen technology. Throughout the segments it’s proven to be an essential tool for exploring, if you could figure the puzzles associated with it. I started liking this exploration aspect when the game made it clear that there are interactables that have pieces of lore to them. It gives me a reason to look in every nook and cranny, much like in the Uncharted series.

The low poly artstyle fits the game perfectly, in my opinion. With this style, they can have a more stylized look about the game while not taking anything away from the hand-drawn art. On top of that, exploring the unknown caves now look more impressive than they ought to be.

Going back to the situation – the pair reach the inner sanctum where the pirates have Eda cornered. Already having a plan, Eda starts to negotiate with the pirates. She nearly had a guarantee with the leader until Lee and Kay showed up and messed everything up. At the climax of the stand-off, Kay gets shot protecting Lee, and all three become prisoners of the pirate gang.

Before we go any further, I would just like to point out that choice matters – at least in this demo. Should the player have chosen not to do anything. Bones, the leader of the pirate gang, will notice Lee out of the corner of his eye. Shooting him before Lee can even stand up. This results with the elderly Lee misremembering the encounter. Don’t worry though, the demo doesn’t restart or anything. Thankfully. It just picks up again where we must make a choice.

At first, I was concerned that choices don’t matter. So, to make sure that isn’t the case, I played the demo twice to put any questions to rest. I’m glad that I did.

Not content with being the guests of pirates, Lee and Eda formulate a plan to break free. This involved the destruction of Lee’s precious ship. Kay, being too injured to reject the plan, has no choice but to go along with his master’s plan yet again.

The final part of the demo sees us learning that Eda is a Witch herself, and by using her voice she can activate tech will. But that’s not enough to get past the guards. Lee proposes using his ship as a distraction. The explosion will keep everyone busy while everyone rushes to the docks where Eda’s friend, Remi, is expected to pick them up.

The CGI cutscene of the ship escaping was something I didn’t expect to see in a demo build. It wasn’t much but if there’s going to be more than just the hand-drawn art then this game just got even better. The demo ends with Kay revealing that he is a veteran of the Lumen War, and he knows a thing or two about Eda’s ship. And help is what they need after the engines stopped responding.

I have high expectations for this title. More so after learning that Echo of Starsong is the third game in the OPUS series following The Day we Found Earth and Rockets of Whispers. Check them out if you haven’t already. Aside from the story, I’m also looking forward to collecting all 247 memories present in the game. It’s pretty much the only thing to do besides solving puzzles, I assume.

OPUS: Echo of Starsong is expected to release sometime later this year. For more information on the title, you can check out their Steam page.