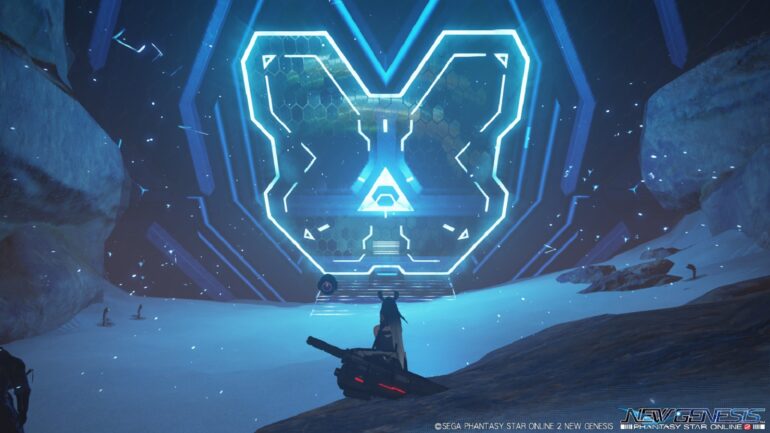 What’s up, gamers? SEGA updated their online game PSO2NGS with a new update: Tritinas’ interior, where the repetitive quests linked to the current Limited Quests can be fulfilled. With this area, you repetitively run 6 floors, with floors 1-5 being randomized except for the midway point and the 6th floor being the only ones that never change, one being a platforming labyrinth and the other where the pyramid’s boss, the Ikusa Bujin, a stronger Bujin that the ones encountered in the first and second regions’ open areas, possessing a whip-like 2nd arm that widens its range and doubles its hit count, but that will be explained later.

Trinitas, home to not only one of Retem’s high points and the Motavia Theme Easter Egg and 4 Red Boxes, has been revealed as a giant rhomboid structure with its lower half buried except for one side where the entrance is, which can be accessed via going the waterside on the East part of Central Retem and sticking along the coast until you see the entrance, along winding downward road which leads to the door towards a fun challenge or a repeating nightmare, depending on how seasoned or well-equipped you are.

Some of the challenges occurring inside Trinitas’ runs will be the increasing enemy attack power and HP, which can grow up to 200-300% at most, posing a considerable, if not fun, challenge to those playing long enough to be able to read their movements and abuse the counterattack damage to its fullest or if you follow the universal meta and plan your Augments right, proving itself to be a great challenge that will push you to greater skill levels you can learn while under pressure and challenge, proving to be even greater if you have the -20HP per Minute random debuff activated as well.

The Limited Quest tied to Trinitas requires you to have an A and S Rank, which you will most likely climb bit by bit as the modifiers pile up and causing the challenges to yield more points from enemies killed to even completed side challenges like clearing an area within a set amount of time or getting damaged or knocked out below the allowed amount which upon reaching is automatically failed. The coveted Kvaris Exchange Tickets await the players who tirelessly farm them, proving to be a serious challenge on the 2nd wave as those quests are accompanied by clearing the Rank 2 Purple Triggers on both the first and second regions, something that could prove to be quite challenging considering the Malevolent-type enemies are generally 4 levels above the level cap.

Covering the Ikusa Bujin and fighting it is no easy feat, even with a full team of 4. It can hit twice as much and as hard as a regular Bujin thanks to its whip-like 2nd arm, which increases its range and even grants it the ability to spring forth and grab you from a distance, and even comes with its own Photon Blast which kills players unfortunate enough to be in its rage into an instant kill.

A setup of ranged and close-range attacks can be used for battling it and keeping everyone at a good distance unless you know the timing to counter its attacks without missing a beat, which helps considerably since its nature is also much more aggressive than a regular Bujin’s AI, allowing you to possibly beat it using counter-attacks for the majority of the fight, making those who use close-quarters have a considerable advantage, marking both ranged and melee methods as Funnular Entertainment Ways of kicking Mutant DOLLS ass.

The icy hills and peaks of Kvaris draws closer with every week. Do you think you have what it takes to complete all challenges and net yourself the possible prizes that will come once the new region gets unleashed, or will you stand by and get only what you can easily pick, forgoing completion and the chance of missing out on great rewards?

Only time will tell once it arrives.