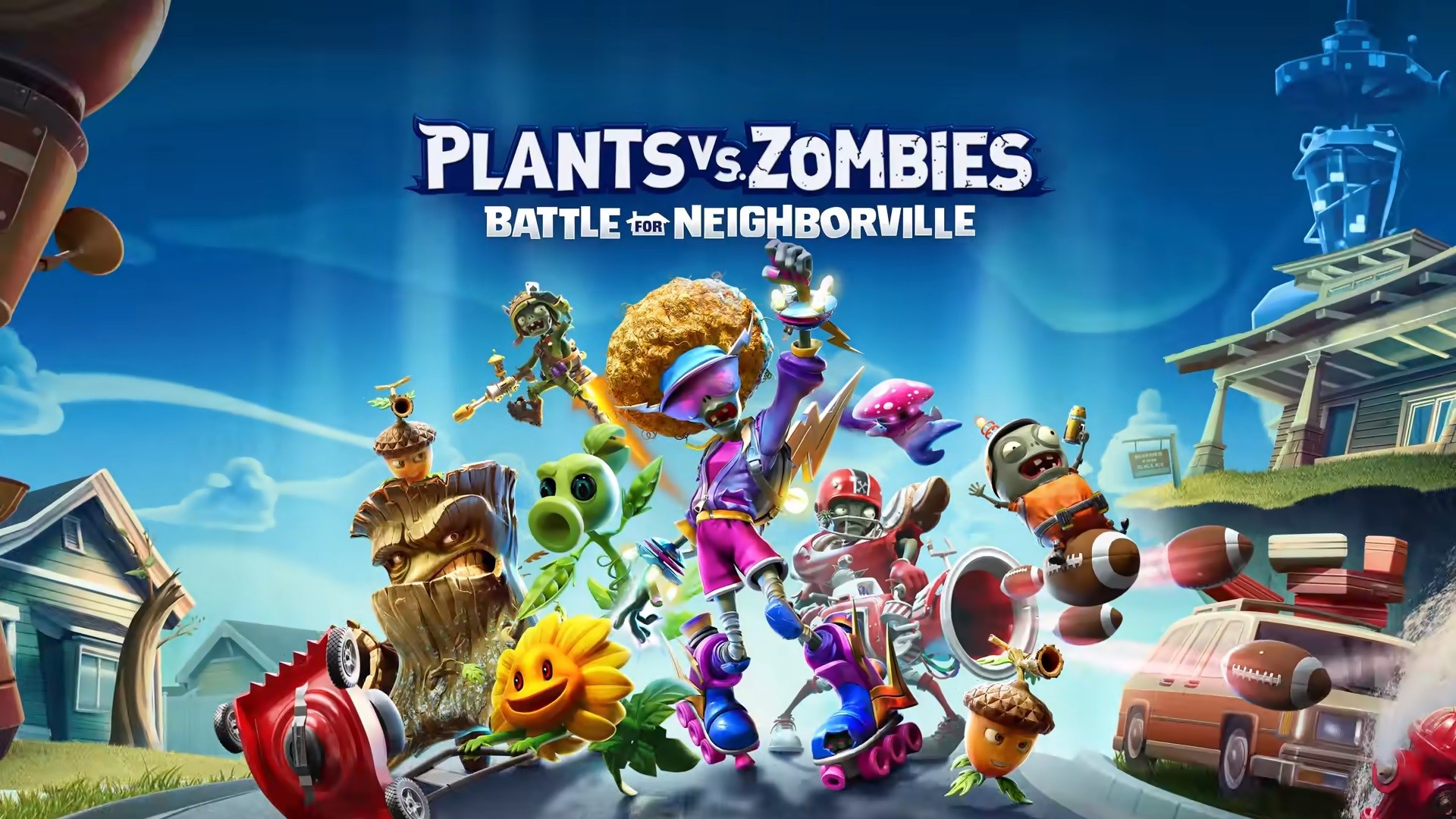 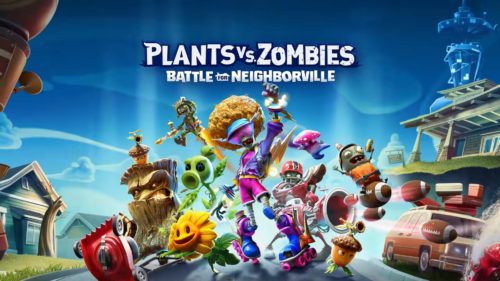 Plants vs. Zombies is a 10-year-old franchise with very humble beginnings. What started off a tower defense variation is now a team shooter with a colorful cast of members and crazy maps. A perfect example of the quote “the more things change, the more they stay the same”. By the end of the day, it’s the same age-old tale of plants defending humans from brain-eating zombies. So, how does the latest game in the franchise fair in terms of moderns? Pretty good, actually.

Battle for Neighborville is a third-person team shooter with both PvP and PvE content. The roster of 20 characters includes returning characters from Garden Warfare 2 and some new additions from the new game. The PvP content is a good mix of objective-based matches and deathmatch variants. The PvE content, on the other hand, is a loose string of fetch quests, leading up to a boss battle at the end. The hub world is the place where the game truly expresses its unique brand of humor. Plants and zombies roam around this space and even challenge one another in the carnival grounds.

The cast of Garden Warfare 2 makes a return to the game, albeit with a few mechanical changes here and there. All characters make use of 3 ability buttons: L1, R1, and triangle. Some characters have the ability to transform, allowing for more attacks. (I’ll talk more on the transformations in a bit.) Battle for Neighborville incorporates a new run system, complete with unique animations and mannerisms. Players need only tap on the L3 button to quickly get back into the fray – in style.

The first thing players will see is that the characters are now part of 3 classes: attack, defend, and support. The classes themselves don’t really matter much in most cases; other than which character is most effective. In terms of damage, almost every character can do the role of DPS in PvP. Unfortunately, the weaknesses do not manifest until players start their solo PvE campaign.

Let’s start with the zombies’ returning attack line-up. First, we have the consistent foot soldier with its machine pistol and rocket launcher, the imp and its mech, and a slightly different version of the Super Brainz. For defense, we have Captain Deadbeard and his exploding barrel and the football gatling gun All-Star. Finally, the supports consist of the healer Scientist zombie and turret building Engineer.

Starting things off in the plants’ attacking side, we have the iconic Peashooter and its gatling form. Next up is a slightly different version of the Chomper. The Chomper is most dangerous when it burrows underground, ready to eat swallow zombies whole. Rounding out the attackers is the Kernel Corn with its moderate DPS and rocket corn launchers. For defense, we have the Sniping Cactus with its onion drone and the surprisingly tanky Citron, the walking orange tank. For the supports, there is the ever-present Sunflower with its healing beam and underrated damage potential. And the Rose; capable of turning entire squads into goats in a blink of an eye.

The newest additions to the plant roster include the Nightcap – a ninja capable of warping time and space, as well as turning invisible. The Snapdragon, whose job is to control the flow of battle by setting the field ablaze. And finally, the yodeling acorn. The acorn is capable of transforming into the intimidating Oak. 3 other acorn players can mount the Oak, serving as turrets and healing the Oak’s damage.

In the zombies’ camp, we have the new bomb-loving 80’s Action Hero. This guy, in particular, is so manly that he can whip up dynamite, dodge, and shoot multiple arrows at once. The Electric Slide is the master of scattering enemy forces. She uses her lighting, generated by dancing to force plants out of position. In a pinch, she can use the Funky Bouncer and Disco Tornade to get out of tough spots. Finally, there is the intimidating Space Cadet. The Space Cadet’s strength lies in its ability to dock with 3 other Space Cadets to form the almighty Space Station. A floating fortress in every regard, the Space Station is a primary target that needs to go down to have a chance of winning.

In my honest opinion, the Zombies’ additions are more amusing. But that’s just me. Above all, The entire roster is full of personality. Whatever character the player chooses to main, they are in for a fun time. Leveling a character is one of the most satisfying parts of the game as it allows the players to customize their playstyle according to their rank. In addition, high ranking character has access to many perks that the player can mix and match to various degrees of pain. All in the name of fun!

The hub world changes depending on which side the player is on. The blight and sunny Plant’s side is offset by the techno-driven Zombie’s side. At the center of the map, lies the carnival grounds where both sides can practice their characters in an arena free-for-all. Additionally, there are 2 transport sites where players can engage with PvE content. A Dance Hall is located to the far reaches of the home base, where players test their coordination timed color tests. After that, the recently opened item shop allows for the purchase of cosmetic items with the use of premium currency. As a final note, let me just say that the hub world is full of little details that add so much to the overall experience. Be it the cartoony graphics or the weird techno stuff in the Zombies’ area, the game just overflows with personality.

As far as PvP content is concerned, there is a bunch of maps that rotate on a regular basis. The weekly map pool consists of game modes such as the ever-popular Turf warfare, a 12v12 objective-based versus map, and a new 4v4 deathmatch style game mode with hero locks after every round. The matches themselves are chaotic messes with little to do with teamwork and class synergy. But that itself doesn’t go against the game. In fact, it’s more fun than it is. In a gaming space where there are plenty of other team shooters, Plants vs Zombies stands out with its uneven map design and balls to the wall cartoony action.

The PvE aspect of the game is a-okay at best. Don’t get me wrong, it’s presentation is somewhat entertaining, they always present the problem in some ridiculous way and the only to solve it is with something equally ridiculous. The objective is pretty much the same in every map, gather X, Y, Z and use said items to defeat a boss in the end. In any case, boss fights are rather enjoyable, requiring different methods to finish off. There are other side activities to do such bounty hunts and collectibles. The trouble with this mode is that only the attack classes have an easier time in this mode. This only applies for solo players, teams are less likely to notice, but in terms of crowd control, the attack classes are the way to go. On the plus side, completing side tasks allows the player to unlock cosmetic rewards.

Cosmetic items are practically the only thing of value that the player gets from coins. Players can earn coins in PvP matches and playing the PvE content. Essentially, players walk up to this giant gacha machine, hoping to see fireworks for that ever-important Legendary item. The items don’t affect gameplay in any shape or form, however. But the ability to flex gamer muscles is the most important aspect in any game. Especially if there is PvP involved.

With regards to the actual scoring of the game, it scores quite highly in terms of mechanics, graphics, and sounds. The gameplay, for the most part, is consistent. While only suffering in the story department because of the loose string objectives that ultimately is just another means of gathering cosmetic items. Surprisingly, it scored the highest in terms of replay value, as PvP game that involves a lot of random stuff for comedic effect.

Plants vs. Zombies: Battle for Neighborville is an odd game – much like the franchise as a whole. The game doesn’t take itself very seriously, and if you can forgive the obvious lapses in map balance and the general Overpowered nature of some characters, there is much fun to be had here. Look at it this way, if you are looking to have a good old fun time, this is the game for you. However, the same cannot be said for the type of gamers who enjoy precision tactics and teamwork. It’s definitely going to wear your patience thin. With that being said, I recommend this game to anyone looking for a light-hearted PvP experience with some PvE content thrown in for good measure. Just give the game a try; it’s worth it.

Plants vs. Zombies: Battle for Neighborville – Review
Score Definition
We tell you, it’s a good game! It’s not average! It might have some problems here and there, but you have to admit it is a “Good” game.
Pros
Bright and colorful graphics
Doesn't take itself too seriously
Roster additions to the Garden Warfare cast
Boss battles are fun, for the most part
Attention to detail for every character
Cons
PvE content is impossible to do outside of Attack classes (solo)
Maps aren't as balanced as most shooters are
PvE missions are mostly the same
A few glitches here and there
Some characters are way too overpowered
7.7
Good