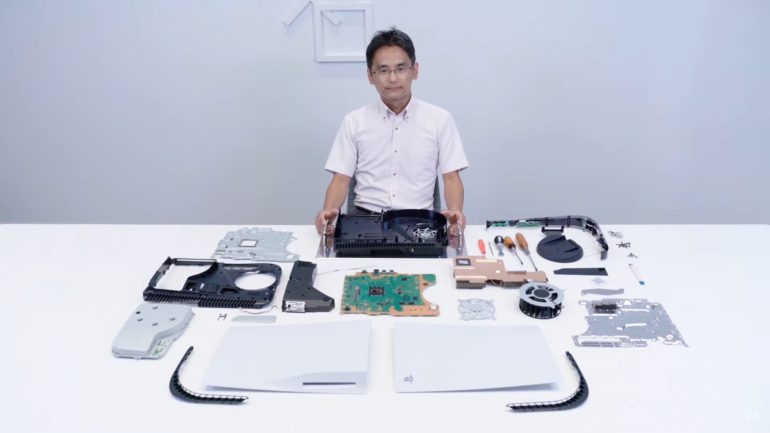 The teardown video features the outside and inside components of the PS5. SIE Hardware Design Division Mechanical Design Dept. VP Yasuhiro Ootori slowly showcases all of the different parts from the side plates to the core components like the processor and more. It also highlighted the mechanism that they have incorporated in the console to make the operating sounds even quieter.

The precise dimensions of the PS5 are 104mm wide, 390mm high, and 260mm deep. Its size is larger than the PS4 and it offers a dramatic improvement in performance in terms of processing power and quietness.

The two rows on the front side are the air vents, which everyone has already seen on many videos. It also has that blue LED lights. The entire rear side is its exhaust port, which could mean this console definitely needs all the airflow to cool it off.

The base is held in place with a flat head screw. It can be removed and has a snazzy easy-to-store mechanic to store the screw inside the base. There is also a small cap that can be used to plug the screw hole. When the console is placed horizontally, the base can be snapped on specific markers on the plate.

The two white side panels can be easily removed by just lifting the back corner and sliding it off. This confirmed my theory that it can be removed easily and a possible product of specialized side panels being sold off. Fans can now customize their PS5s with special panels for certain themes.

With the side panels removed and the insides are slowly being shown off, everyone could now see how large the cooling fan is. It has the capability of drawing in a lot of air from both sides. It also has two handy dust catchers in specific locations. Owners can just vacuum the dust out when cleaning.

Ootori revealed that for future storage expansion, owners will need to use M.2 interface with PCIe 4.0 support. He then slowly tears apart the PS5 bit by bit, showing off the small components to the camera.

The air intake fan is double-sided and its size is 120mm in diameter and 45mm thick. The Ultra HD Blu-ray drive unit was removed, which was encased in a sheet metal case and mounted with two layers of insulators. This was the trick to reduce drive noise and vibration when owners insert the discs inside.

As revealed in another article, the PS5 will have Wi-Fi 6 and Bluetooth 5.1 antenna for wireless connection and internet. It has a CPU with 8 cores and 16 threads. It will run at up to 3.5 GHz. It is a x86-64-AMD Ryzen Zen 2 processor. The GPU is AMD Radeon RDNA 2-based graphics engine, which drives at up to 2.23 GHz and delivers 10.3 TFLOPS.

The PS5 will have an installed memory of 8 GDDR6. It will deliver a maximum bandwidth of 448GB per second. The system memory is GDDR6 16GB. The storage is an onboard 825GB SSD instead of a HDD. It has a custom SSD controller, which allows read speeds that could be as fast as 5.5GB per second at raw data transfer rates. This is how it significantly reduces the load time of a game played on the PS5.

The PS5’s System on Chip or otherwise known as the SoC is a small die running at a very high clock rate. This led them to a very high thermal density in the silicon die. They needed to increase the performance of the thermal conductor or the TIM, which is in between the SoC and the heat sink. To cool it down, the console uses liquid metal as the TIM to ensure long-term, stable, high cooling performance. They spent two years to make this liquid metal cooling system work.

The heatsink of the PS5 is significantly huge as Ootori takes it out from the console. It uses the same heat pipe like the PS3 and PS4. Its shape and airflow made it possible to achieve the same performance as a vapor chamber. The power supply unit is rated at 350W.

And with that last component ends the teardown video. It was an educational long clip that somehow showcases how the PS5 was developed and integrated into one whole console system.

The PS5 will launch on Nov. 12 in North America, Japan, and other few select countries. The rest of the world will get it on Nov. 19.