What is her Pokémon partner? Can you guess? 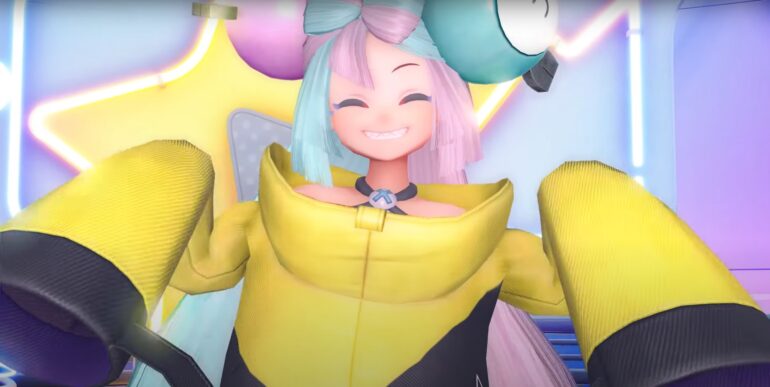 The Pokémon Company has recently released a new Pokémon Scarlet and Violet trailer that introduces one of the new gym leaders of Paldea Region.

The new trailer features the eccentric and colorful influencer, streamer, and Gym Leader Iono. In it, she introduces herself as one of the gym leaders of the Paldea Region who also has her own streaming channel called Iono Zone. She wears a rather interesting outfit that includes an oversized yellow jacket and Magnemite clips on her hair, which she swears that they are not Pokémon at all.

Speaking of Pokémon, Iono then asks her viewers what her Pokémon partner is and she clearly states that it is not the ones on her head. She then gives hints during the “broadcast” describing her partner. She says that it has a squishy body, a little sluggish with an easygoing vibe, has two big bumps on its head that many mistake for eyes, an Electric type, a body that expands and contracts to generate electricity in its belly, and most importantly, she says that it is cute. The last one could be a red herring, but the rest are interesting.

At the end of her broadcast, Iono reveals she will reveal her partner in the next streaming session. It is her way to gain more subscribers and influence from the fans who watch her channel.

In the comments section, some are already speculating the Pokémon partner she has. Some say it is a Jigglypuff that terastallizes into an electric type. Others think it is Wigglytuff, while a lot of them are convinced this is a new Pokémon that The Pokémon Company will reveal soon.

Whatever it is, we will all find out soon.