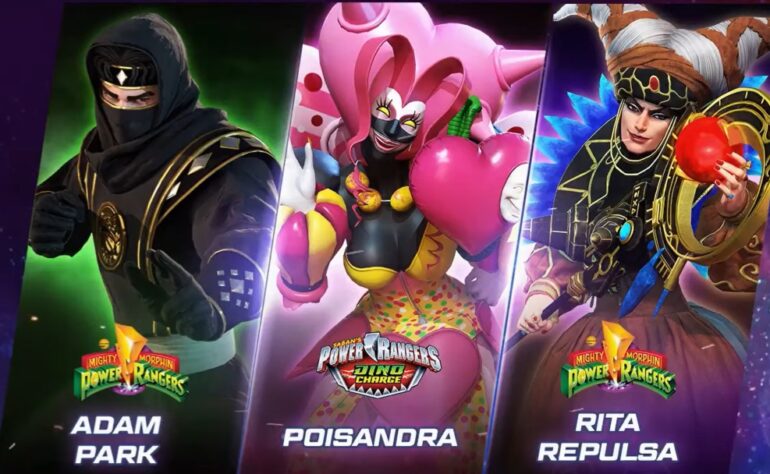 Season 4 content for popular fighting game, “Power Rangers: Battle for the Grid” features a variety of new costumes and new characters joining in the fray. Based on the trailer, we will be getting 3 new characters from different Power Ranger series.

Here’s a little backstory on the 3 new characters coming into the game.

When Rito Revolto joined Zedd and Rita and destroyed the Thunderzords, Adam gained new Ninja powers of the Frog, becoming the Black Ninja Ranger. He also gained the ability to pilot the Black Frog Ninjazord and later the Black Shogunzord.

Poisandra was one of the four main warriors serving under Sledge, and the only female among them. She also happens to be his marriage-obsessed bride. After Sledge’s defeat, she served under Snide and Heckyl. Poisandra, alongside Curio, seemingly lowered in rank, lost the perks and privileges she once held with Sledge. This reached Wrench and Fury as well with Lord Arcanon’s arrival, placing them all in secondary roles and having Singe and Doomwing instead as his personal attendants.

Rita Repulsa is a female humanoid sorceress who was once bent on intergalactic domination and served as the main antagonist for the Mighty Morphin Power Rangers. She was sealed in her dumpster for nearly 10,000 years before it found its way back to the moon. Not long after, a pair of curious astronauts stumbled upon the strange container and broke the seal that kept Rita’s evil at bay. Released from her prison, she destroyed the dumpster and quickly set her sights on Earth. Reoccupying her palace which had lay vacant for eons, Rita sent her chief warrior, Goldar, to Earth to lay siege to the world.

Aside from the 3 DLC characters joining in the game, a new DLC costume has been revealed in the trailer for SPD’s Shadow Ranger. Now fans can choose the non-ranger form of the Shadow Ranger, Doggie Krueger.

More content about the game’s season pass will be announced soon. Power Rangers: Battle for the Grid Season 4 will start on September 21st.

Power Rangers: Battle for the Grid is out now on PS4, Nintendo Switch, Xbox One, PC (via Steam), and Google Stadia. Those who want to get the complete DLC collection of the game, they can purchase the Super Edition of the game which is out as well.