Gravity’s relaunching of the beloved 2001 MMORPG, Ragnarok Online, in the Philippines was met with a lot of excitement from its community. The players were excited when it was announced that Ragnarok Online Philippines (ROPH) is coming back. Gravity, ELITE, and Electronics Extreme hosted an event in May of this year to showcase and announce its comeback.

However, ROPH’s open beta is plagued with connectivity issues. Players have been complaining about the issue through the official ROPH Facebook page. Others have heavily criticized the game’s awfully unstable connection and the lag that the players are experiencing. Some even said that Gravity’s customer support is just unresponsive and unhelpful. There are also players outside the Philippines who are getting issues while playing the game, and they even spent more than Php. 5,000 (roughly $99) for items and other in-game purchases. 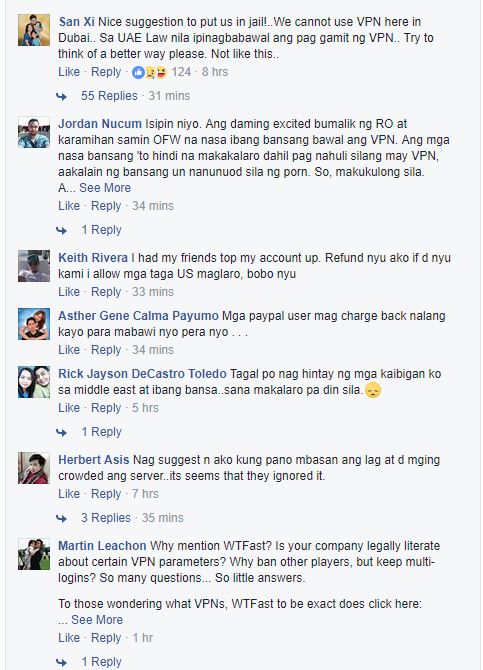 It’s no surprise that the possibility of the Philippine servers can’t handle the amount of players. The lack of crowdcontrol, or even the hardware to withstand the huge chunk of people playing in a server, is probably the cause of the problem. However, in a recent announcement from ROPH’s official website, it states:

In order for us to provide a smooth experience for all our players, Thailand, Malaysia, Singapore and the Philippines will be the regions to have access to our game servers. This is essential in preventing and reducing the issues consisting of Lag/latency/Disconnections that have occurred in the previous days. We recommend players with said issues to utilize VPN services (such as WTFast). However, our website will still be accessible worldwide for Ragnarok fans around the world. We hope to offer our players the very best experience with the service we provide and will continue to improve as time goes on.

Thank you and happy gaming!”

Gravity is encouraging players outside the Philippines to use VPN services like WTFast. But certain countries like the United Arab Emirates does have a law regarding about using VPN services, and most Filipino users from the UAE who commented on the ROPH Facebook page even confirmed that they are not allowed to use VPN.

Cebu Appliance Center’s owner, Andy Go, even noticed that the ROPH Facebook Review Tab has been disabled due to the fact the page was getting a lot of 1-star reviews from the players. Andy was able to screenshot the error he was getting when he tried to check the review tab on the ROPH Facebook page. According to Andy, the page had about an average score of 4.5 stars but this quickly went down because of the massive server issues.

Even if the review tab was disabled, the review of Andy still stayed. You can read it here.

Another screenshot of the 1-star reviews: 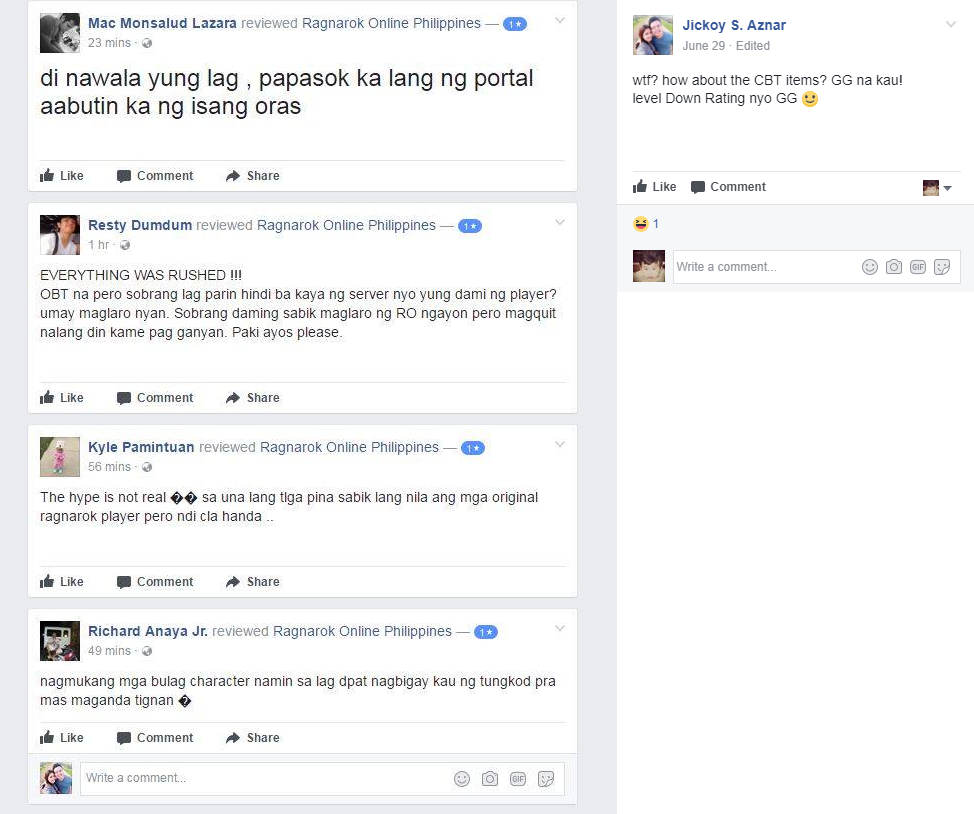 Aside from these connectivity issues, there is still an ongoing problem. Items acquired from the closed beta weren’t wiped out completely when the open beta started. A lot of players who were able to get their items from the storage before they were removed get to keep these items. The admins, unfortunately, are not doing anything to rectify this other problem. It’s confirmed by the players that the closed beta items still remains in the open beta phase.

More screenshots of the issue (click to view the full image): 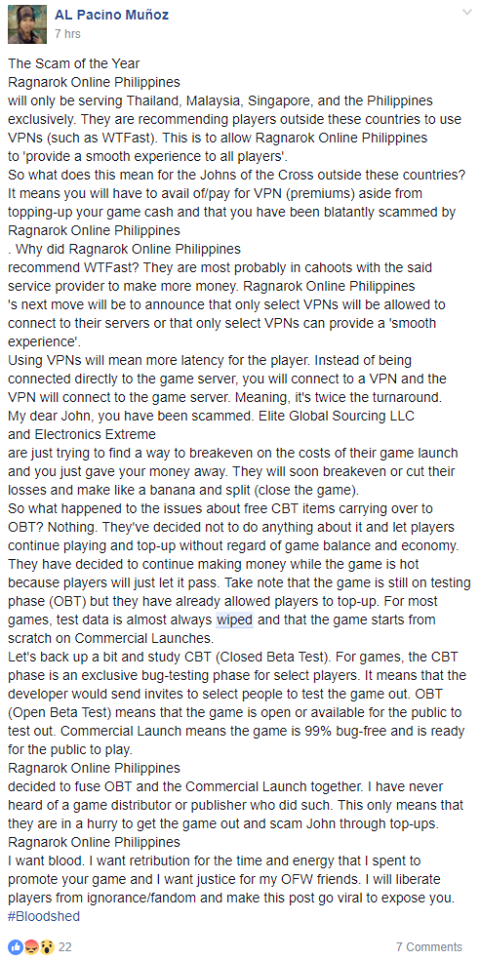 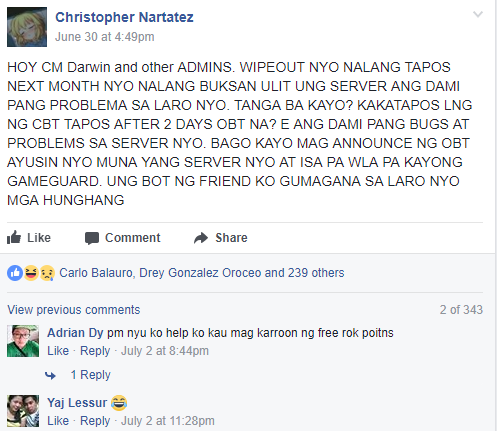 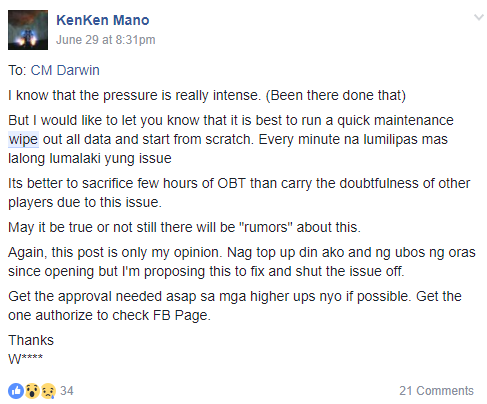 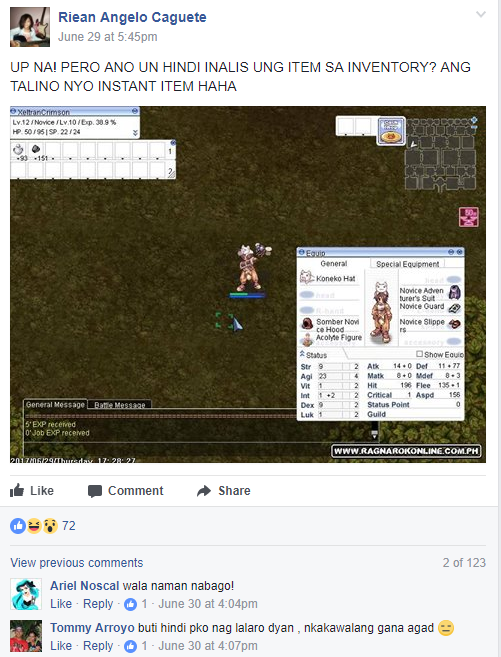 We have tried to reach out to Gravity regarding about the said issue. The story will be updated once we get a response.