Resident Evil 2 was one of the most anticipated games. After the hype build up with Resident Evil 7 where it instills anxiety at every turn, Resident Evil 2 gives players a little more power now that they have a proper gun to shoot. And thankfully for those who have motion sickness, the Resident Evil 2 remake is a lot more motion-sickness friendly. Cameras don’t shake too much and players can be immersed into the game. However, this game just like its predecessors is not for the faint of heart. Don’t play this at night if you have photographic memory and an overactive imagination.

When I first entered the game, the graphics were extremely gorgeous. And surprisingly, the load doesn’t seem to heavy on the graphics. Then again, the PC (or rather a laptop) I used was an ASUS ROG Laptop armed with a GTX 1050. If you have a desktop PC, I’m sure the Resident Evil 2 Remake can run better especially if your GPU is above 1050.

In this part of the menu, you can actually control how defined the image is. When I played, I just went borderless windowed with normal settings. However, if you check the menu, there’s something there called “interlaced”. Interlaced appears to be the lower setting but there’s not much difference when you examine it.

When I took a closer look, it didn’t have much difference save for a few pixels. Now, if you’re not the nitpicky type with the pixels and you’re more concerned about your laptop being able to make sunny-side up eggs for your next meal then, you can go on Interlaced. Interlaced would work better however if your resolution would be a bit smaller (it depends on your GPU and processor). And it would also make the processor work less.

Another thing you can also control is the image graphics. The image’s default setting is at 100%. However, you can choose to increase it and decrease it and you can see how much weight it’ll have on your processor. On DirectX 11, it would take 1.7 GB. The higher the quality of graphics, the more weight it has. Because of this photorealistic quality of images, it goes without saying that if you have anxiety or someone who has great photographic memory, you might want to steer clear of this game as it has zombies where the camera pans right into their face.

So, I ran Normal with a GTX 1050 for a GPU with a resolution of 1920 x 1080 and it still held good at around 50-60 FPS. For further acid test, I ran Google Chrome at the same time to see if it would drop. And so far, it hasn’t. If Resident Evil 2 Remake can run well even with Google Chrome on a laptop with only 8 GB for RAM and a 1050 GTX, it’s a pretty good run though the auxiliary fans do start activating after 30 minutes of that.

Before you start playing, you have a choice to choose between two characters: Leon and Claire.

For some, they would start with Leon. Since I started with Leon as well, most of my gameplay shots from here on out would be Leon. However, whoever you choose is entirely up to you.

As you go through the game, it’s not that hard to navigate. It’s easy to get past the structures and obstacles. Especially when you begin changing areas, navigating the place can be quite easy. However, the challenging part is going through without getting killed. At different points in the game, you’ll find yourself navigating through the horde. And unfortunately, you can’t just jump over the obstacles. You’ll have to weave through it and dodge through the zombies.

However, the zombies seem to have a small range of detection. If you count it, it’s around 50-100 units before they will start attacking you. The AI are slightly dumber in a sense that there’s this 1 second window where you can possibly sprint for your life. After that, they’ll detect you and begin attacking you. However, this was played in Normal mode. Hardcore mode may have smarter AI and they are already considered harder to kill.

Aside from the AI being the way they are, another thing to take note about Resident Evil 2 Remake is that they still retain the item management system. In which, no you can’t just throw a hail of bullets. Bullets are limited by the amount of reloads you have in your bag. At the start of the game, you have eight bullets in your handgun. As the game goes on, you’ll find handgun bullets lying on the ground. What does this mean? This means that there are some – or if not all – battles that can be avoidable. If the zombies you’re facing are just the “creeps” and not story-locked then, you can just simply move past them. Remember, they’re zombies. They don’t jump; they just drag their bodies towards you in an attempt to bite your head and devour your guts for their snacks.

However, if you’re really hell-bent in shooting them down. I personally found shooting in the PC easier instead of using a controller. Even though PC’s have controllers they can attach via USB, the cross-hairs seem to respond better through using a mouse. However, the cross-hairs don’t always respond and you’ll have to estimate at least 5-10 units each time you want to take a proper headshot.

But it’s not all just running for your life and shooting zombies. Just like any Resident Evil game, there are puzzles you have to solve. Sometimes, the clues can be a bit hard to find especially if you don’t have good eyesight. However, Resident Evil games always had this blend of painstakingly annoying puzzles to solve all the while making you suffer in anxiety as you make sure you don’t get eaten. For some parts however, you’ll at least be able to go around and try to solve the puzzle without the fear of being eaten. Personally, the puzzles can pose quite a challenge especially for those who are not familiar with the Resident Evil games.

In fact, the puzzles in the Resident Evil 2 Remake can be quite challenging and the normal heuristics may not work. For example, finding the Lion medallion. No one really expects to look down and find the clues right under the goddess statue. However, if you do manage to then, good for you. The annoying part however lay in figuring out what symbol meant what. The symbols are not a straight up reference to what the clue gives you so it may take some trial and error. A lot of the puzzles are similar in that sense that you have to think out of the box to figure out which item was for what.

You might be wondering though, is this still the same storyline as the original Resident Evil 2? Or does it differ from that? When Capcom first made the game, they already mentioned how the Resident Evil 2 Remake was going to be a little more different. While staying faithful to the storyline, what will change is the experience and the subtle differences to the puzzles and the narrative. Some NPCs which originally stayed on the sidelines became someone you could interact with. Other parts that you dodged and weaseled around became more important as some parts you have to either barricade them or enter them to get the key component that you need.

However, one of the main difference is how each character ends up. Minor spoiler: they won’t fight the same boss. Because Claire and Leon have different objectives, their weapons and their approaches vary. For example, as you play through Leon’s story, you’ll notice you’ll have more guns to use. After all, he’s a police officer. It’s part of his job. Claire on the other hand has more situational weapons such as a knife, grenade, sub machine gun, and even a mini-gun to use.

However if you’re talking about lore, it might be hard for them to appreciate. For example, some bosses were brought back into the Resident Evil 2 Remake that the old fans would know. Another is that the old fans would notice the nitty gritty details such as the camera angle. In the old game, it was more of an overview. However, the Resident Evil 2 remake now has an over-the-shoulder camera angle making it more immersive for players.

There are other fun stuff to find in Resident Evil 2 Remake and it’s the DLCs and the concept art you can get. As you venture deeper into the game, you’ll be unlocking more concept art and other things. But so far, the Resident Evil 2 Remake has adapted well to its remastered version with having more intricate graphics adjustments to allow players with all sorts of computers to be able to play.

Now, shall we try Hardcore mode?

Resident Evil 2 Remake is a masterpiece in the graphics department. Especially for those who have loved the series long before, Resident Evil 2 remake has exceeded all expectations. Although for those newly entering the franchise, it may be hard for them to appreciate. 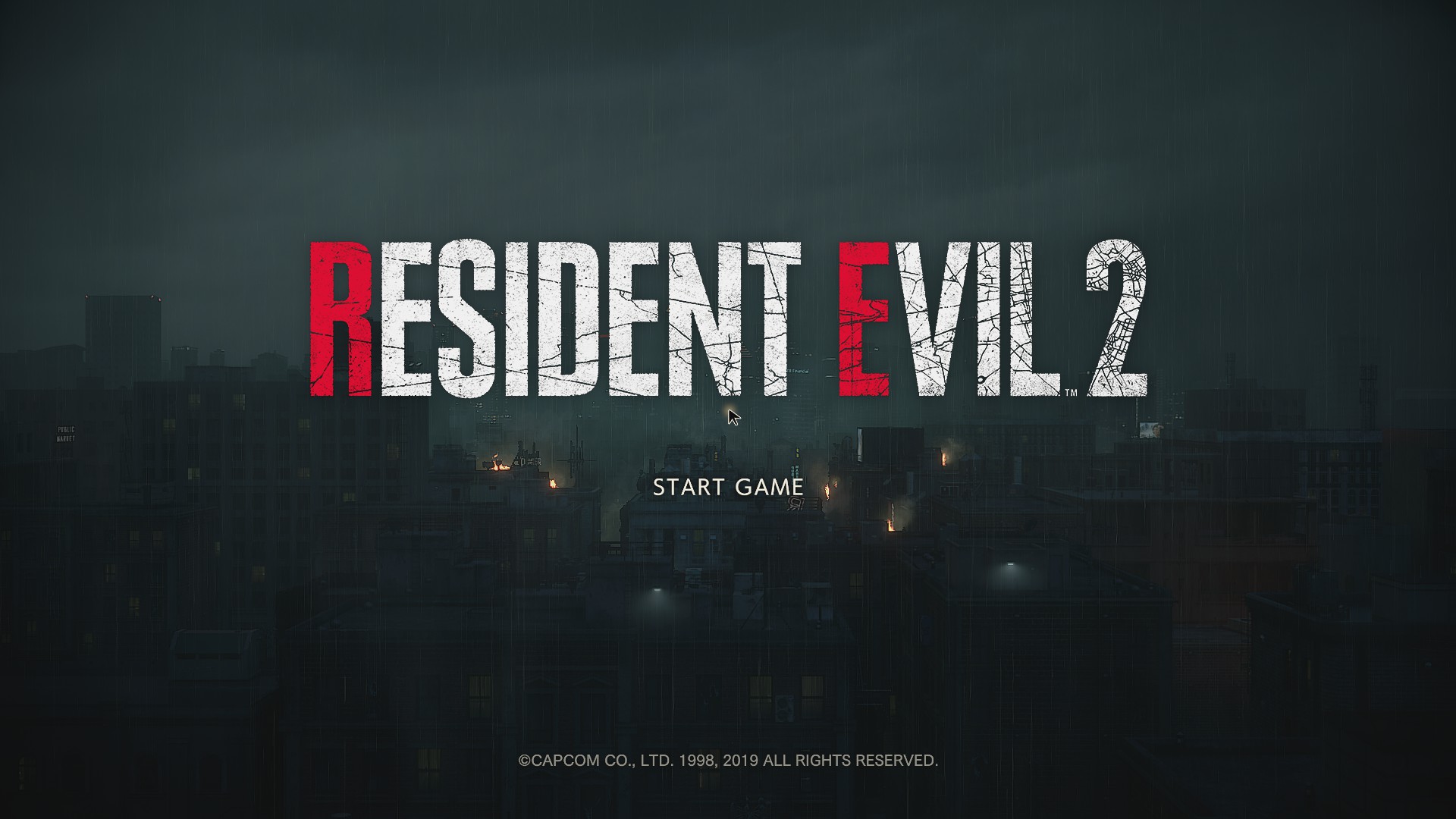 Resident Evil 2 Remake Review
Score Definition
Almost perfect if not for the nitty-gritty. If it’s quite there but not enough to push the boundaries, it’s still an awesome game.
Pros
Amazing graphics that allow players to adjust the graphics to make it easier for their laptops/ PCs to handle.
Clear definition of characters, Leon and Claire. And it's well-written to what they're supposed to do.
A lot of new things that are appearing and Easter eggs to enjoy from the Resident Evil franchise.
Cons
Game might be too heavy for those who have a GPU of 1050 and below.
For those who have bad aim, be prepared to lose a lot of bullets and to run most of the time.
9
Excellent