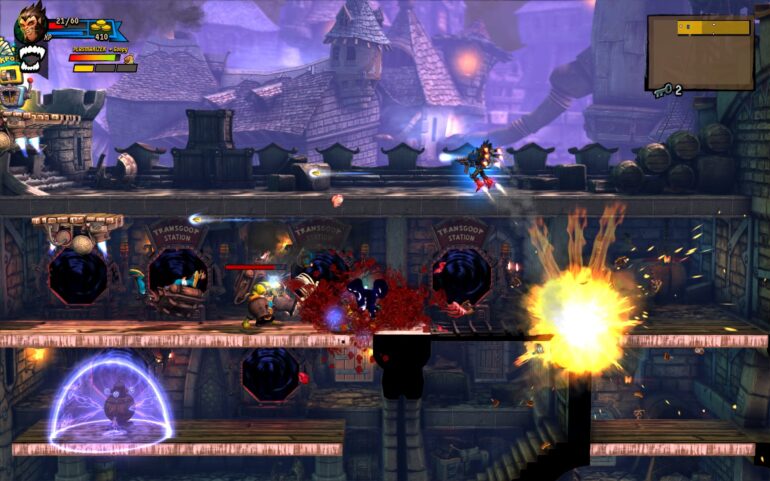 Rogue Stormers is a side-scrolling action platformer. Let me reiterate that, Rogue Stormers is a side-scrolling action platformer combined with rogue-like elements, leveling system with persistent perks, a visual style which is a mix of fantasy and science fiction, and local and online cooperative play up to four players. While it sounds like a mishmash of different ideas, it is a strong combination, but does it all work out?

Rogue Stormers is developed by Black Forest Games, and the game was initially available on Steam’s Greenlight service, but it’s now fully released. As stated, it is a side-scrolling action platform with an emphasis on run and gun style of gameplay. It’s very fast-paced and can be frantic with all the action going around your character, and requires a lot of focus to avoid the enemies’ projectiles that are being thrown or shot towards you. The gunplay is perhaps best compared to Metal Slug, where you need to move around to dodge incoming enemy attacks, but the fields is not as static as like those in Metal Slug’s and you are free to move around and pull enemies to chokepoint locations. A little nod though to Metal Slug is rescuing prisoners, and these prisoners can provide rewards like secondary ability. These secondary weapon are not only found from freed prisoners, but also from chests, Jack Pod stations and stores. The secondary ability range from shotguns, flamethrowers, grenade launchers, plasma gun, drones, and more. Additionally they may also come with a random unique attribute such as to create a black hole, have armor penetration, or plop mines. Obtainable also from chests, Jack Pod stations and stores are items which give strategic buffs, but are lost upon death. These are not for free either, some chests require payment either from gold you picked up or health, the Jack Pod stations also require gold payments for them to be activated, and you have to buy the equipment from the store with gold. 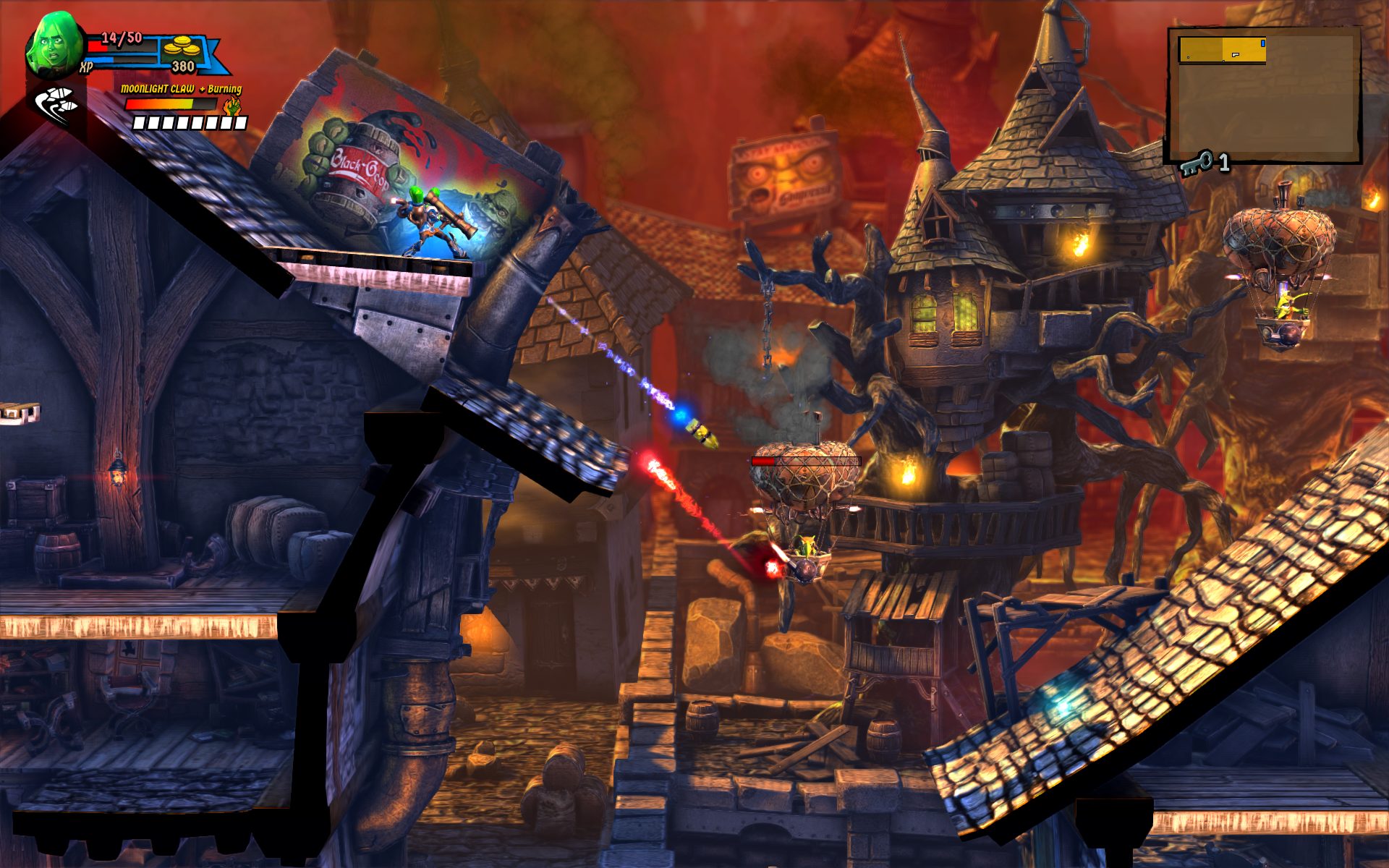 Health preservation is key, and death can be very punishing. Upon death, you lose the items that you collected throughout the level and you are forced to restart the entire mission from the beginning. Health kits do drop and will replenish your health in certain amounts, but their appearance is random like the rest of the drops, meaning you can either be overflowing with health kits or barely have any appear making runs either easier or harder. Admittedly restarting is not as bad since the levels are randomly generated and this changes the scenery quite a bit, although after multiple plays you should start to notice certain pieces seem familiar. The generation also seems competent enough, with levels being smooth flowing and consistent in their layout and design. Still, being forced to start from the beginning maybe frustrating to some.

The game has progression in the form of character level and character unlocks. This is raised by gaining experience from slain enemies or from the chests, and upon leveling up you are presented two random perks to choose from. The perks vary from increasing damage, health, faster movement, gaining health upon surviving a fight, etc. and are persistent through death, making them permanent buffs. It is a grind though to gain levels, since enemies do not consistently drop experience points and is random. The perks are kept balanced in a sense that even after you have played 1000 runs, it should not make the game any bit easier. To unlock additional playable characters, you must finish a certain missions to unlock them. Missions are made up of several levels, and as previously stated, you are forced to restart the entire mission upon death. 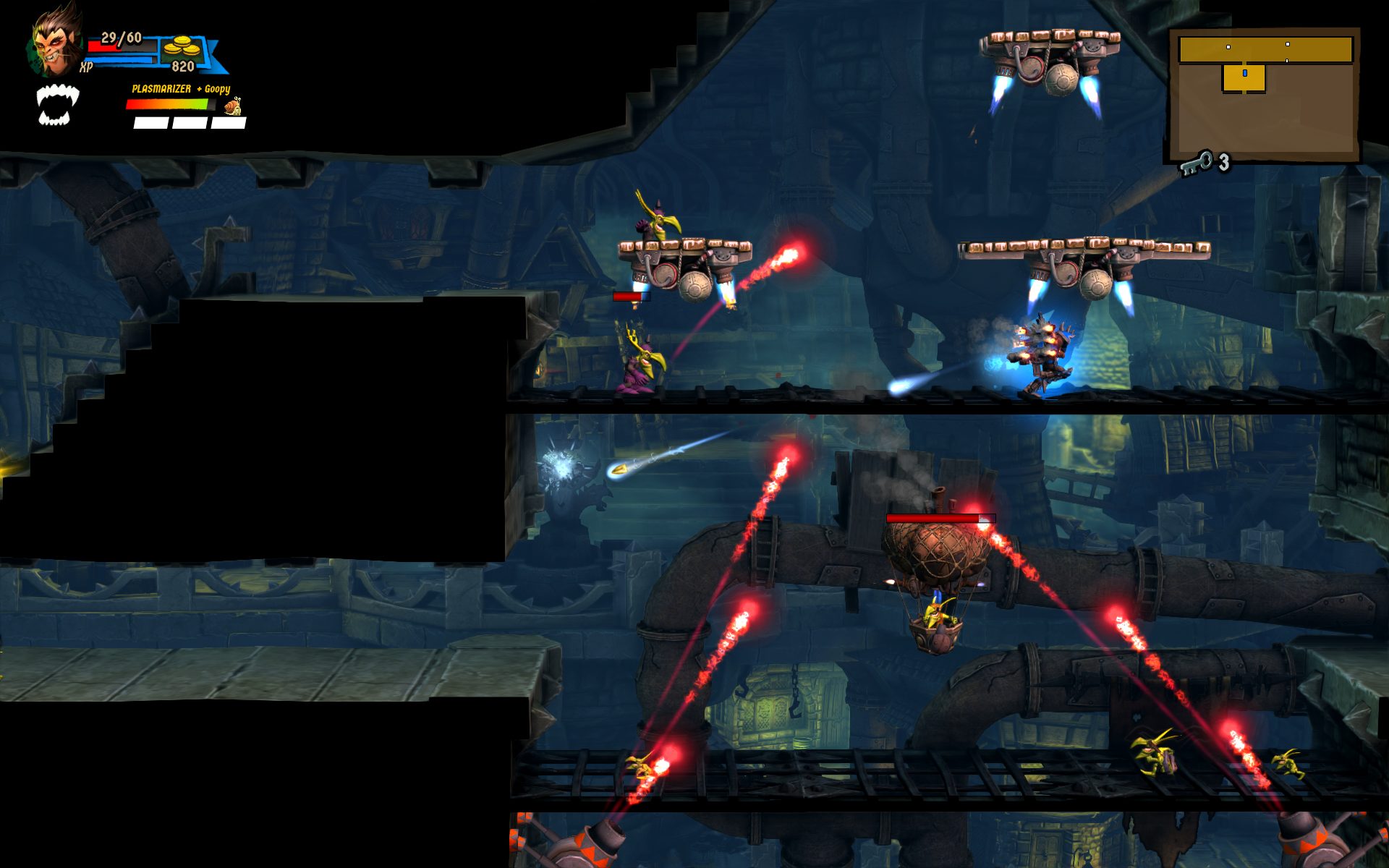 Rogue Stormers comes with both local and online cooperative play with up to four people, but it seems that the best experience would be playing the game locally. Online is dependent on the host’s connection and your internet, and online is pretty barren. While it may seem odd to have local cooperative on PC, the game has controller support. Playing locally also allows you to play with friends and have a good laugh while playing, which helps considering how hard the game can be. Notably different though during cooperative play is that all four players share the same screen and you lose the ability to freely move around the map as you please. You are concentrated on a section of map unless everyone decides to move, while not bad, prevents people from going their own way and exploring the map by themselves.

While it does a lot of things correct and brings back nostalgia from yesteryear’s action platformers, Rogue Stormers is far from perfect. It has fun gameplay and a unique combination of rogue-like and old-school, along with bringing back of almost long gone features like local cooperative play, but the way how the game handles item drops, the long grind for even early levels, and the lack of save points after each level can be frustrating to some people. The game is a mix bag, and not for everyone. Personally, I will try and try again, but I do have my limits.