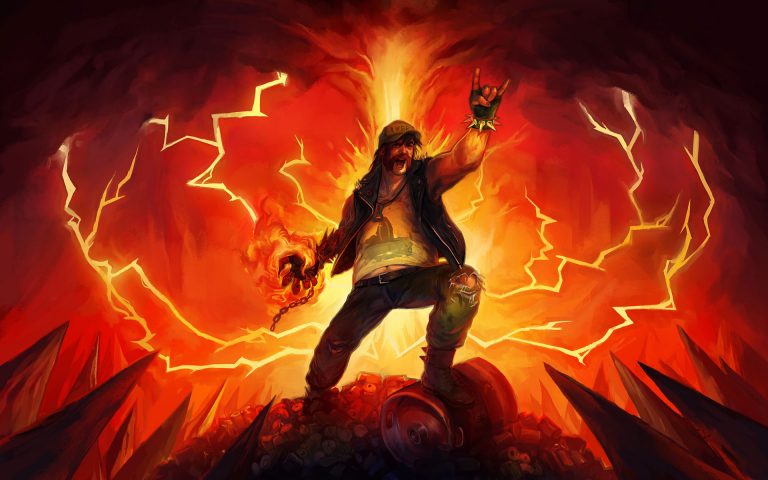 Let’s cut right down to the chase. Are you a person who enjoys both platforming and speedrunning? If so, then you’re definitely going to enjoy this game.

With a hundred levels and multiple collectibles scattered throughout, Seum tests your ability to gauge distances, aim precisely, and how fast you can do all of that while trying to make it to the finish line as quick as you can. 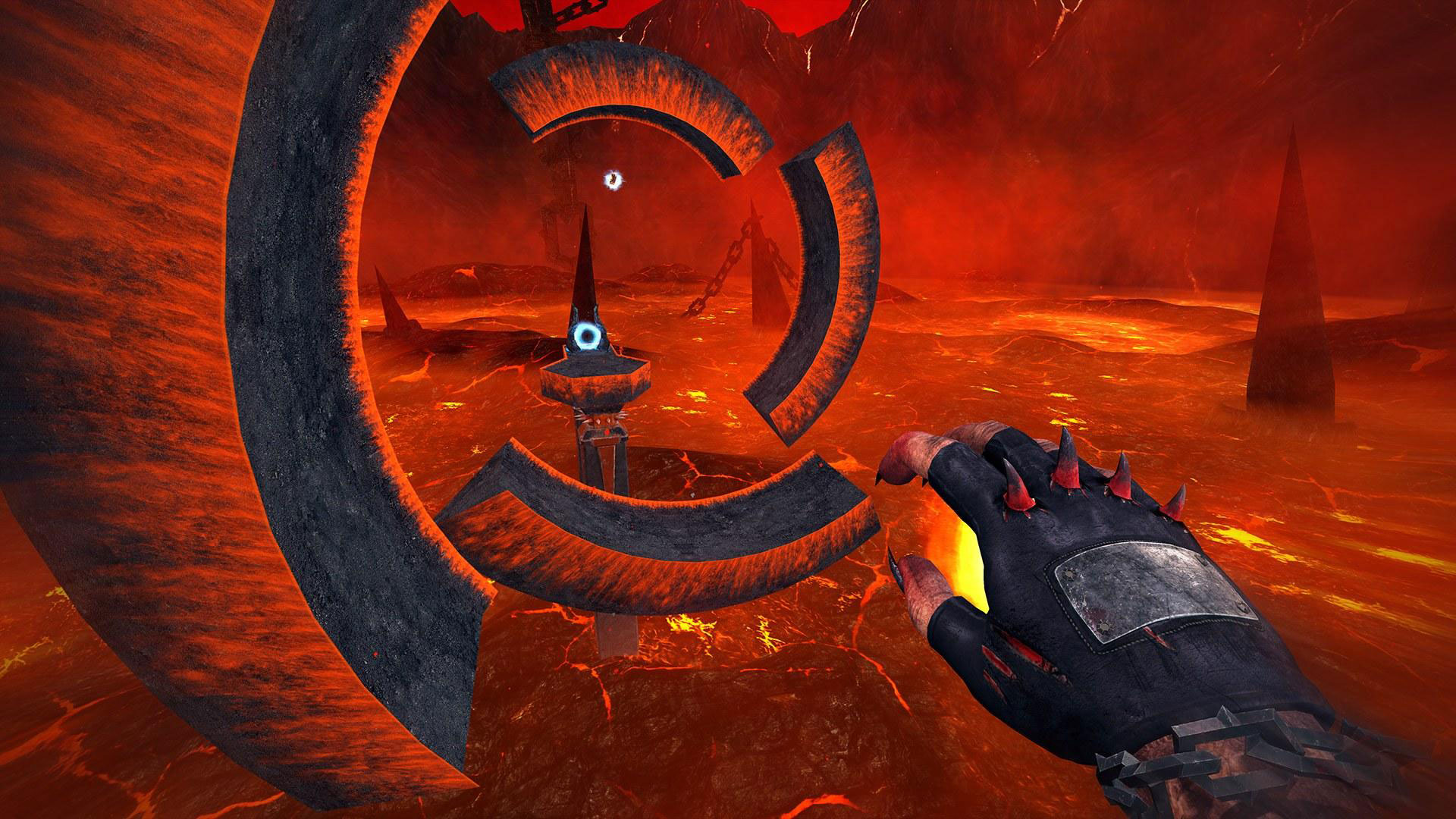 First off, the game starts with a nice comic book inspired cutscene. You’re introduced to Marty, a lazy looking redneck who apparently spends his days sitting on his couch, watching T.V, and drinking a ton of beer.  As he goes about his lazy routine, Satan himself comes crashing into his house, steals his beer, and chops his arm off in the process.

Marty, being the sophisticated badass that he is, accurately manages to throw a record disc hard enough to chop the devil’s own arm off; which he then takes and attaches to his own body. With the power of Satan’s arm,  it’s up to Marty to venture into hell and take back his beer from the prince of darkness.

Yep, the story sounds crazy, right? But trust me, this is not the type of game that you play for its plot. In fact, it only has 3 cutscenes and they’re pretty straightforward. You either do really good or you don’t do well at all, that’s it.

As one would expect, all 100 levels are completable within a matter of seconds. The whole point of this entire game is to beat each of these levels in the fastest way possible. The only thing that you’re aiming for is the blue portal on the other side, so it’s basically just getting from point A to point B.

Also, you don’t have to worry about controls as there are only around 5 actions you need to do all throughout the game. You have your standard jump, long jump, and then you can shoot fireballs straight from your own arm (or Satan’s, but it’s technically yours now). Then, this games has powerups that you’re going to have to use on specific levels. There’s one which allows you to literally control gravity itself and another where you can lob a glowing orb and teleport to wherever it lands.

What’s great about Seum is that it mixes things up, giving each level its own unique twist. You’ll never have to worry about any of them being too similar as they all have their own difficulties, as well as their own gimmicks. Another good thing to point out is the game teaches you its mechanics right from the start by allowing you to experience them firsthand as you play along. If you mess up? Then all you have to do is press the Triangle button, allowing you to instantly retry the level. 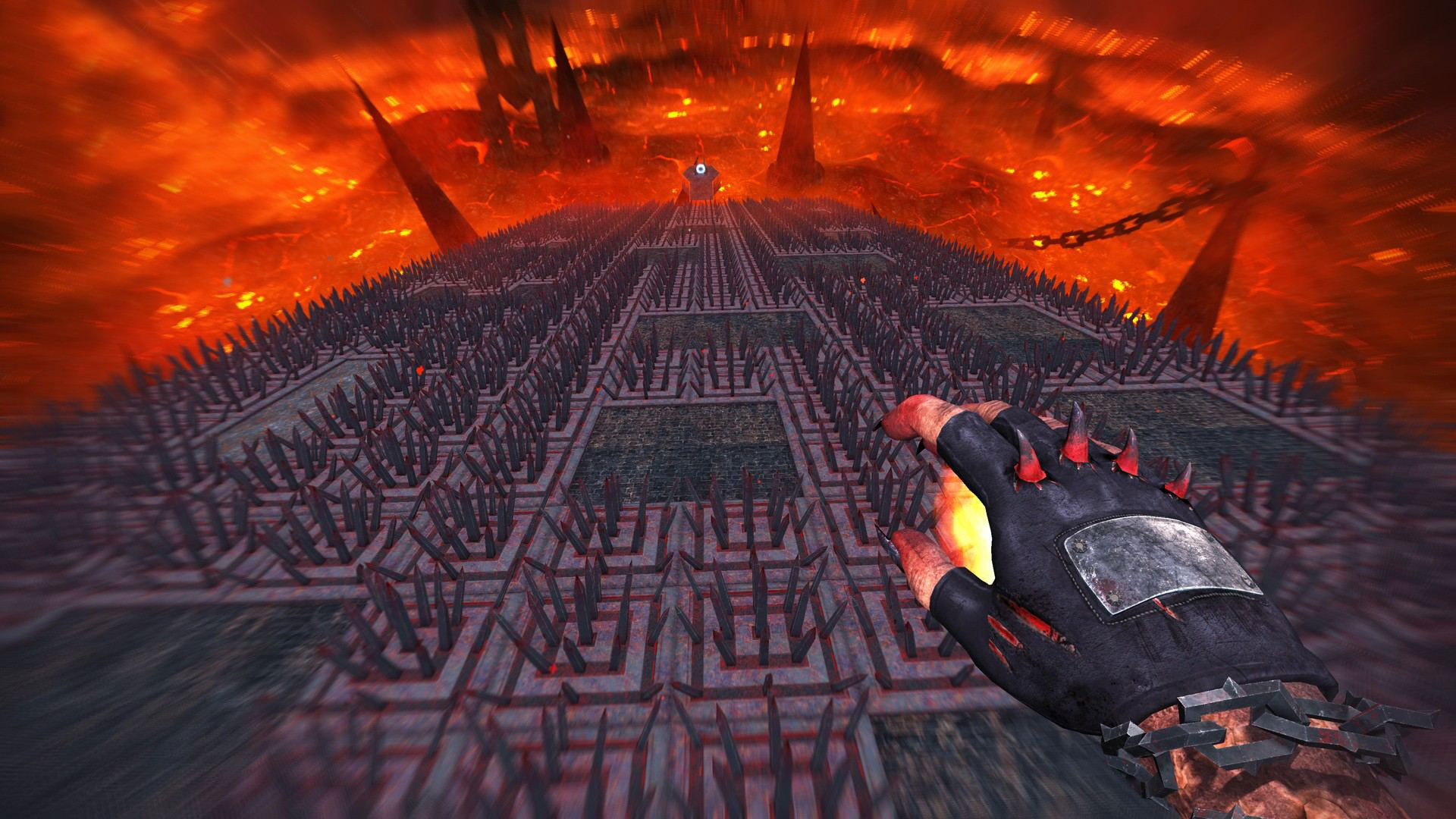 There are also other ways of playing the game in the forms of endless mode and speedrun mode. The latter basically takes all the levels that you’ve completed and puts you through this endless gauntlet until you manage to beat all of them; it’s basically a way for you to test out how far you can keep going without messing up. As for endless mode, you’re thrown into an endless level where all you have to do is keep moving forward. But don’t think you can just stop and rest as there’s a moving deathtrap that’s constantly trying to get to you.

Marty controls well enough as he moves precisely where you want him to go. If ever you do fail in a particular level, it’s not because the character did something you didn’t intend to do. This is a game that lets you know that you’re the one with the problem if you aren’t able to make it to the end. I believe this as there have been many times where I’ve definitely become too overconfident thinking that I can make impossible jumps, only to end up falling on a pit of spikes, drowning in lava, or dying to mines (yes, apparently Satans uses mines in hell).

The music is great as it contains a completely heavy metal soundtrack that’s meant to get your blood pumping. Plus, it’s made even better as both Marty and Satan have a couple of things to say every now and then whenever you fail or complete a level; this is actually a pretty nice touch as you feel like you’re being goaded by the devil to keep trying.

This game was definitely meant for speedrunners as there’s always a leaderboard present for every single level. While they only take seconds to complete, you might find yourself spending minutes or even hours on just one of them. The reason? It’s because you’re most likely trying to get the number one spot on the leaderboard or at least within the top 10. I know this because I have also spent many minutes on just one level to at least get my name within the top slots (I wasn’t able to do it but at least I tried right?)

While I’ve been singing my praises, this game does have a couple problems. First? The collectibles. In every level, there’s an item like a beer can that you can collect if you go out of your way and look for them. While it’s nice that they’re there, they feel pointless as most players tend to ignore them just so they can make it faster to the finish line.

Another is that while the whole premise of the game is that you’re in hell trying to get your beer back, it does get tiring seeing the same color scheme over and over. I’m pretty sure you’ll be tired of the color red and black after playing the game for an extended duration. 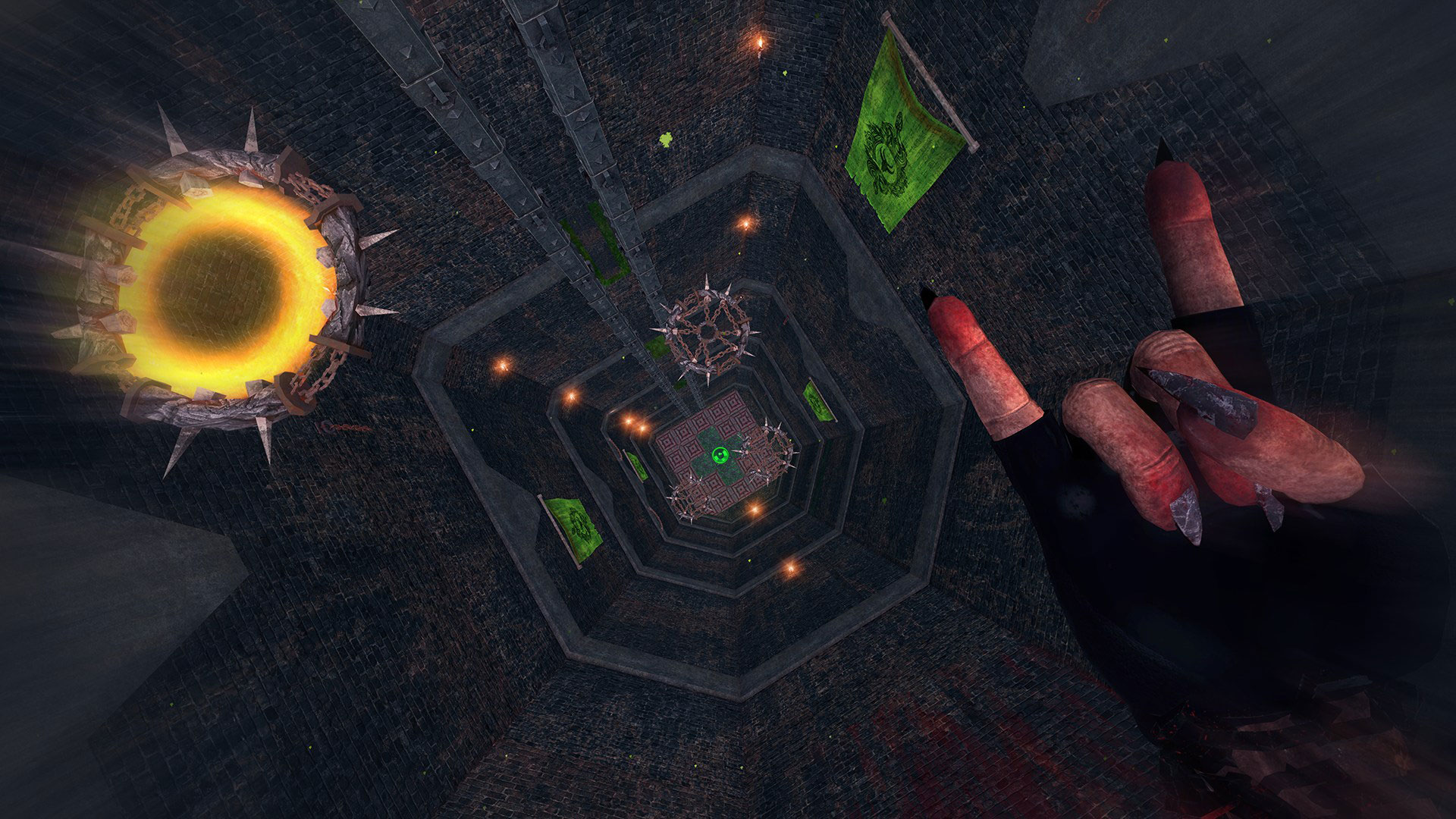 However, these problems are minor compared to everything else it gets right. As its name states, it’s a game that’s meant purely for speedrunning. No convoluted plot, no difficult game mechanics, just you and how fast you can make it to the finish line with your platforming skills. For how it was intended to be played, it does everything right and that’s something I can truly appreciate.

Just take note that this game is not for everyone as there may be a couple of people that aren’t fans of speeding through every level. But if you love doing that, then you should definitely buy your own copy of Seum. 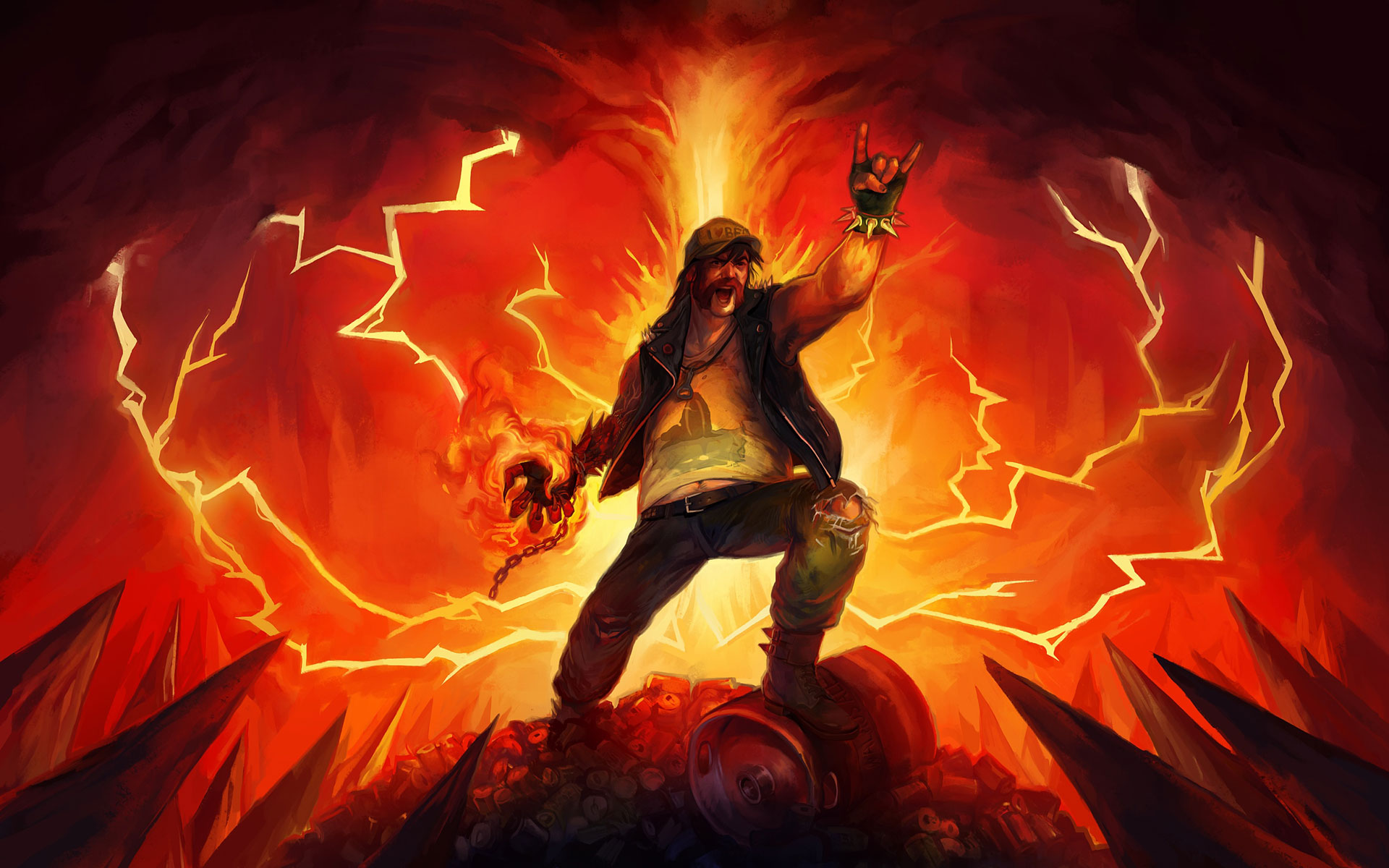 SEUM: Speedrunners from Hell - Review
Score Definition
May it be the likes of Shadow of the Colossus or Metal Gear Solid, if it’s quite there but not enough to push the boundaries, it’s still an awesome game.
Pros
Right amount of difficulty
Levels with good variety
Blood pumping music
Easy controls
Cons
Pointless collectibles
Repetitive Background and Color Scheme
Not a game for everyone
9
Excellent