At their very core, stealth games have been relatively simple. Make sure to move around unnoticed. Some games have been adding a twist to the formula in the form of certain gimmicks such as Dishonored’s powers, and the Arkham series’ various bat-gadgetry. One such stealth game with a plethora of gimmicks is Shadwen, a 3rd person stealth game by Frozenbyte.

Shadwen has you in control of the titular assassin in her mission to assassinate the king, who along the way rescues a young orphan girl who now has to tag along with Shadwen. Shadwen tries to incorporate a lot of gimmicks to it’s gameplay which on paper sound rather interesting but ultimately aren’t executed very well. First off there’s the mechanic of time only moving when you are moving or when you hold down the R1 button. This mechanic was something popularized by first person shooter game Super Hot. Where it fails is that while Super Hot was a fast paced shooter game which had the player on their toes, Shadwen as a stealth game has a relatively shorter pace. Unlike Super Hot, the constant time stops in Shadwen constantly break the pace and dissolve whatever tension a stealth game should have from sneaking around. While Super Hot handled it’s time altering mechanics beautifully with how the player had to make the most of the split second time given to them when enemies are shooting all over the place, the time altering in Shadwen isn’t really all that useful. The only time it’s probably of any substantial use is when using the game’s grappling hook. 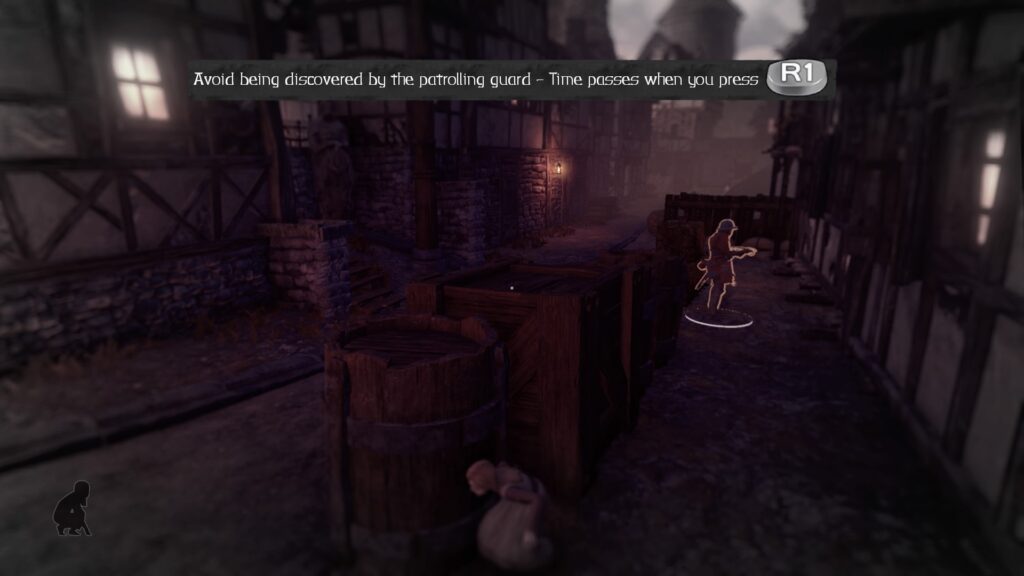 Like the Arkham series and even classic shooter game Thief, Shadwen has the player able to shoot a grappling hook into certain surfaces which they are then capable of rappelling towards or swinging from. While on paper, being able to zip around like batman and change targets midair seems like quite the fun endeavor, Shadwen ruins the experience with how clumsily the mechanic was handled. Rappelling isn’t the smoothest experience, and players will find Shadwen just dangling off the end of the rope like a toy on a string. No care was done to make Shadwen’s swinging animation any bit fluid. The swinging is so poorly done that you practically need to use the game’s time stop feature just so you can properly swing to your next target. If by some miracle, you find yourself in range of the next target for your grappling hook, remember to manually reel yourself in lest you end up smacking into something while you dangle on your rope and attract the attention of the guards. Luckily, for such screw ups, the game lets you rewind time much like in Prince of Persia. Unlike Prince of Persia, Shadwen has no penalties for rewinding and you are free to do it as many times as you wish. This perhaps is one of the only gimmicks in the game I found executed properly as it’s simple and does its job properly with no frills. 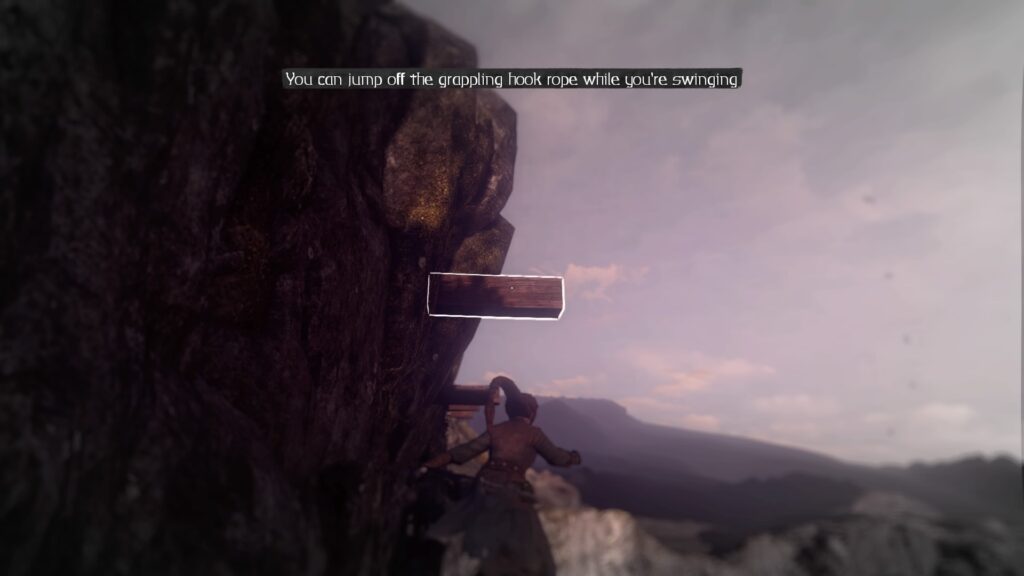 Another one of the game’s gimmicks I found rather haphazardly implemented was its crafting mechanic. While sneaking around the games world, Shadwen can encounter various blueprints of gadgets she can craft to be used in her mission. Honestly, this doesn’t feel very intuitive at all and can be seen as rather bothersome as the whole crafting element seems unnecessary instead of making the gadgets item pickups. What doesn’t help with this is how clunky the inventory menu is and how unhelpful some of the schematics can be when telling you what objects can be crafted or not. 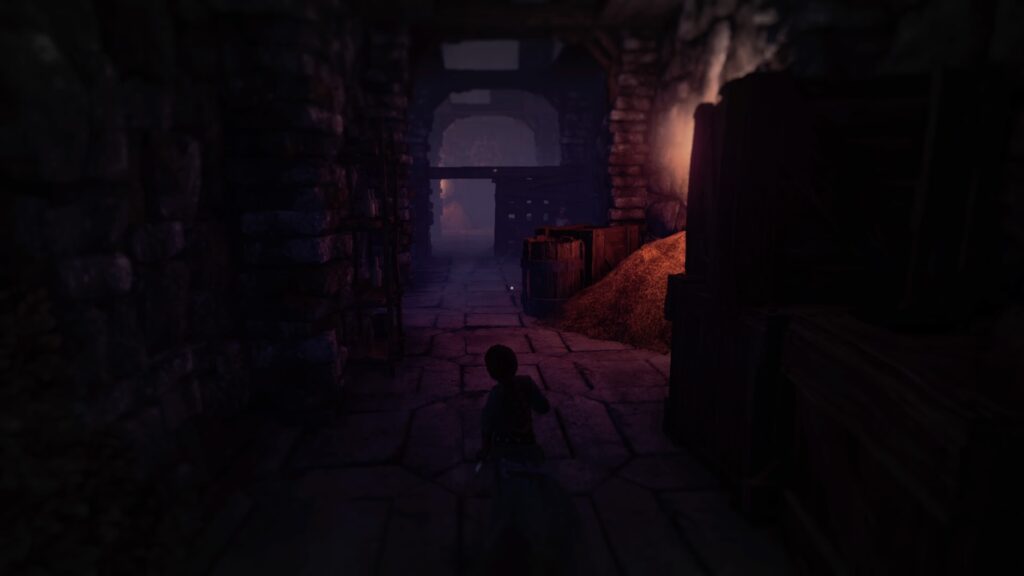 Lastly, the most integral gimmick in the game and one that can be seen as it’s biggest downside is how the game is one big escort mission. Throughout most of the game, Shadwen is accompanied by the orphan girl Lily. Most of the time Lily sticks behind cover like a good girl and moves from cover to cover to follow you. This however doesn’t stop her from being caught by the guards when she moves around. While you can manually tell her to move to cover of choice, the game doesn’t give you a proper prompt for this and Lily’s pathfinding and timing of when to move isn’t exactly the greatest. Perhaps what makes this mechanic such a defining feature however is how the story is impacted whether Lily sees you commit grisly murders or not. If you don’t care for sentimentality, then you’re free to sneak and murder as you will. However, if you’re aiming for the good ending then you have to be extra careful to make sure that you get both you and Lily across without being seen, or make sure you can commit your murders without Lily seeing you. It seems like an interestingly integrated moral dilemma, but given how a lot of the game handles so clumsily it ends up feeling more like a chore. 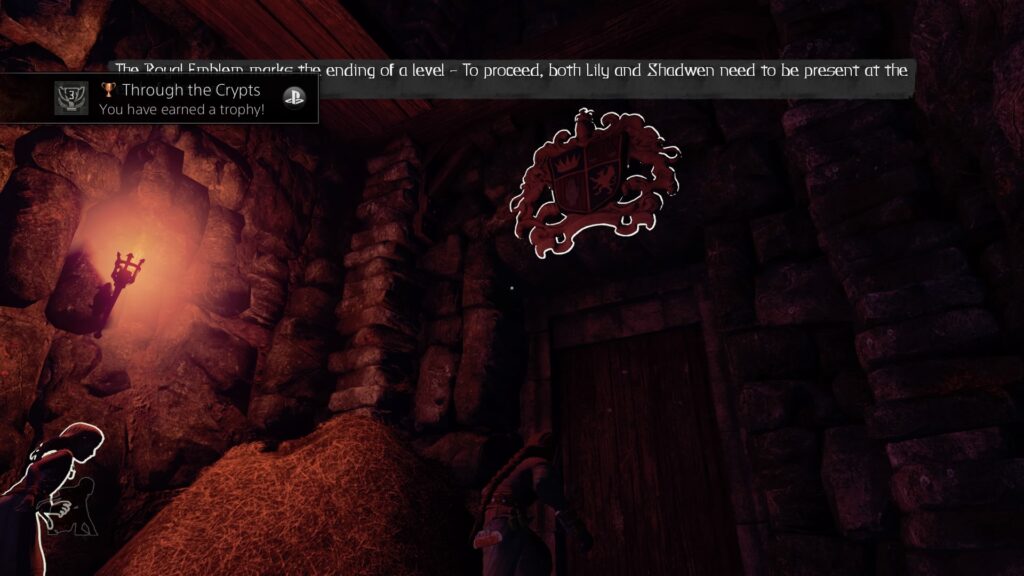 Overall, Shadwen tries too hard to be more interesting by adding in more gimmicks, but because of how they didn’t really work well together to make a cohesive stealth experience, and are mired with how badly they were implemented, the game itself just ends up feeling like an incoherent mess. The game has potential, but it fails to live up to any of the features it tries to advertise. So many other games do it’s individual gimmicks better so you’re better off playing them since Shadwen does not do a very good job of combining said gimmicks together.