In 1991, Sid Meier’s Civilization was the first game released in (what turned into) the staple franchise of 4X turn-based strategy games worldwide. They’re some of the most hyped games on release, yet still deliver with overwhelmingly positive reviews from critics and consumers alike.

With so many games falling short of the hype this year, I was a bit nervous that Sid Meier’s: Civilization VI would just be more of the same. The Civilization franchise is what sparked my love of online PC strategy games, but in this world of real-time games with 20-30 minute rounds, I was nervous that I wouldn’t have the patience for the 12 (or more) hour rounds of Civilization VI. Boy, was I wrong.

Sid Meier’s: Civilization VI stays true to itself in creating an engaging and dynamic world in which players can explore, expand, exploit and exterminate their way to victory. On release, they offer 20 different nation leaders that each provide different pros and cons which will affect how you choose to achieve victory.

There’s no set-in-stone “story” that you play through, but that’s not because there is no story. Each game of Sid Meier’s: Civilization VI has its own storied history that the player builds through their interaction with the world and the leaders they share it with. 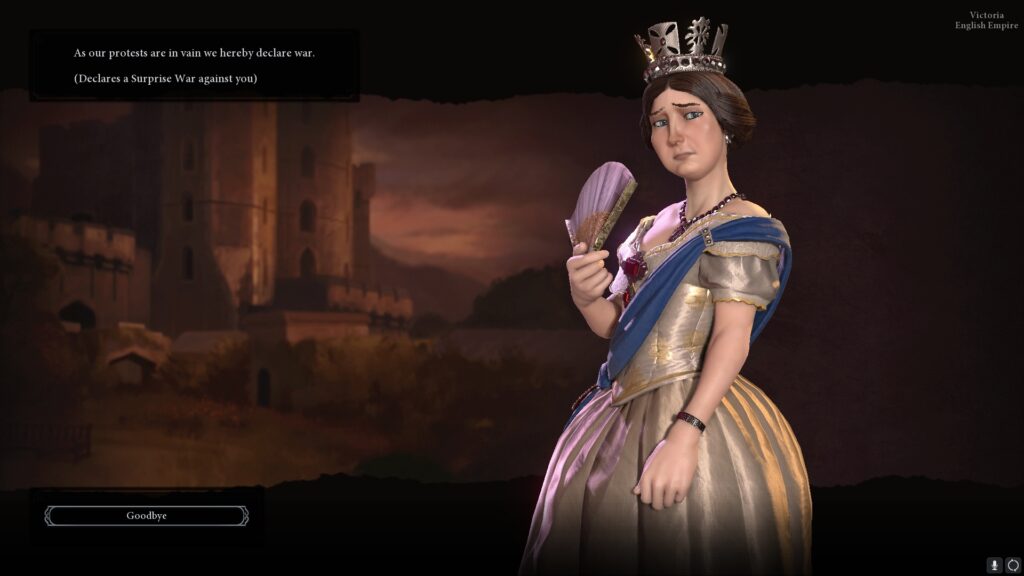 In game one, England may be your strongest ally; protecting your borders from more hostile nations while you work your way to the space age. In game two, you may find yourself in a constant battle with Queen Victoria of England; forcing you to find alternate strategies for victory.

Starting with just some Settlers and a group of Ancient Warriors, Civilization VI can appear a bit daunting at first to the inexperienced player. Not to worry, however! The fantastic tutorial (which I also had to use) has you covered and will guide you through your first civilization so that you can take on the world yourself.

The graphics in Civilization VI are beautiful and add a level of depth and clarity that had been missing from Civilization games before it. The fog of war is no longer a fog, but an unexplored map that still needs to be charted. Water moves and shimmers with the light in a way that makes the entire world feel more alive. Every change made to the GUI and maps has only proved to make the game more appealing to old and new players alike. 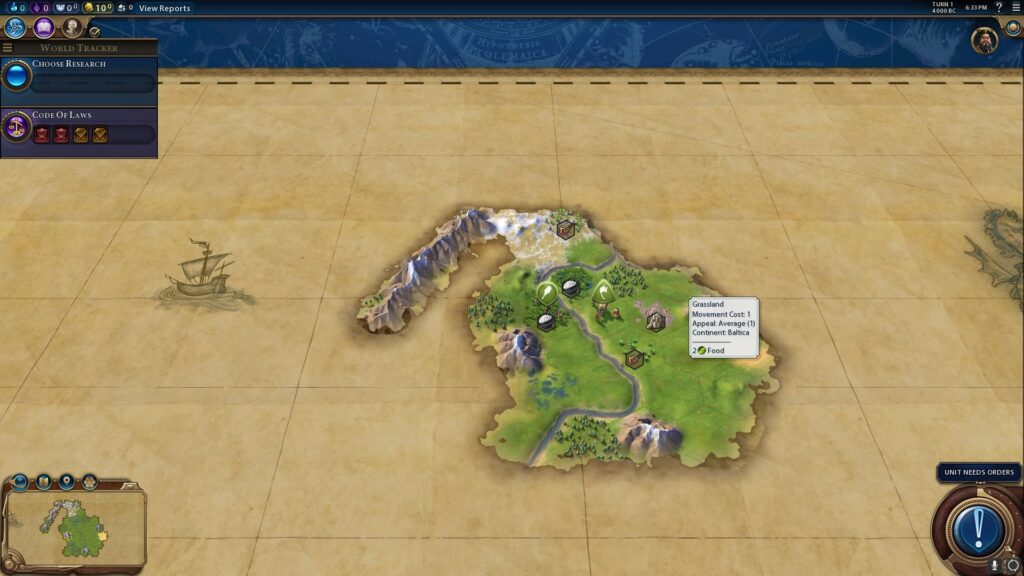 AI has the potential to make or break any game and it’s doubly true for 4X strategy games. If it’s too difficult, no one will touch it; too easy and it will be boring. Civilization VI has found a way to keep each of its 8 difficulty levels fun and engaging for players of all skill levels.

Tip: I have experience with the Civilization games, but haven’t played in years. Regardless, I decided to jump into the game on the medium (Prince) difficulty, expecting the lower difficulties to be too easy or boring. Do not do this! The easier difficulties are just as dynamic and exciting as the more challenging ones. I promise.

Civilization VI has removed a lot of the “bloat” that the earlier games had, which at times made the games feel more like the player was battling themselves instead of the opposing nations. While it’s still just as important to maintain order in your own civilization, there’s more focus on keeping a good public image among the other nations of the world. 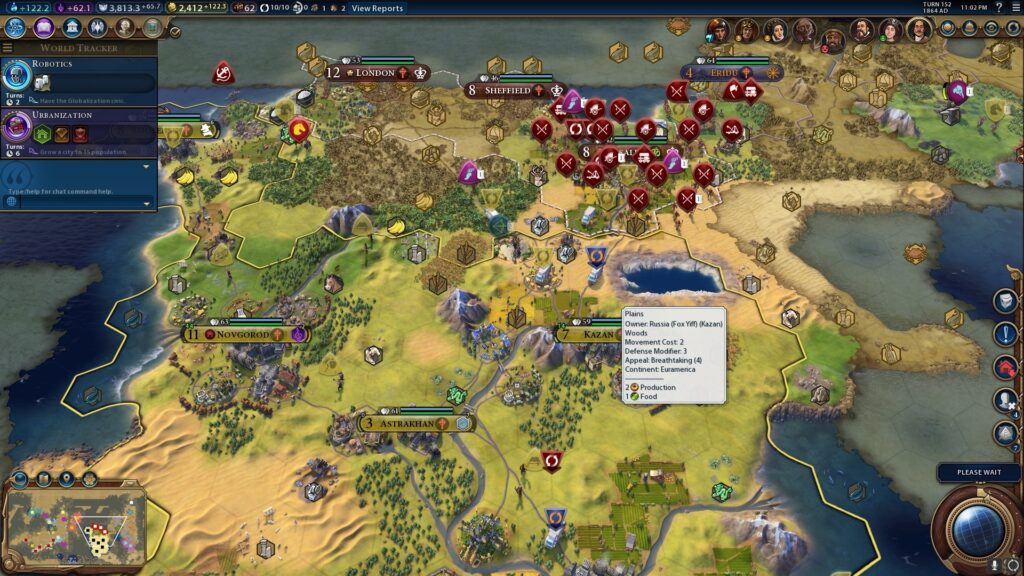 The multiplayer mode is smooth and can be played privately or publicly with friends all over the world. There’s also a mode that allows multiple players to play from the same device. While the goal in each game is to achieve victory, the multiple ways to accomplish that make single and multiplayer modes an emotional roller coaster of the highest highs and lowest lows.

There are still a few issues and glitches with targeting tiles, clicking buttons and trying to perform actions that just won’t work until you find that “sweet spot.” Aside from that, some have reported issues where the game itself will crash when they open the program or when trying to load a game, though I haven’t experienced any of these issues myself. 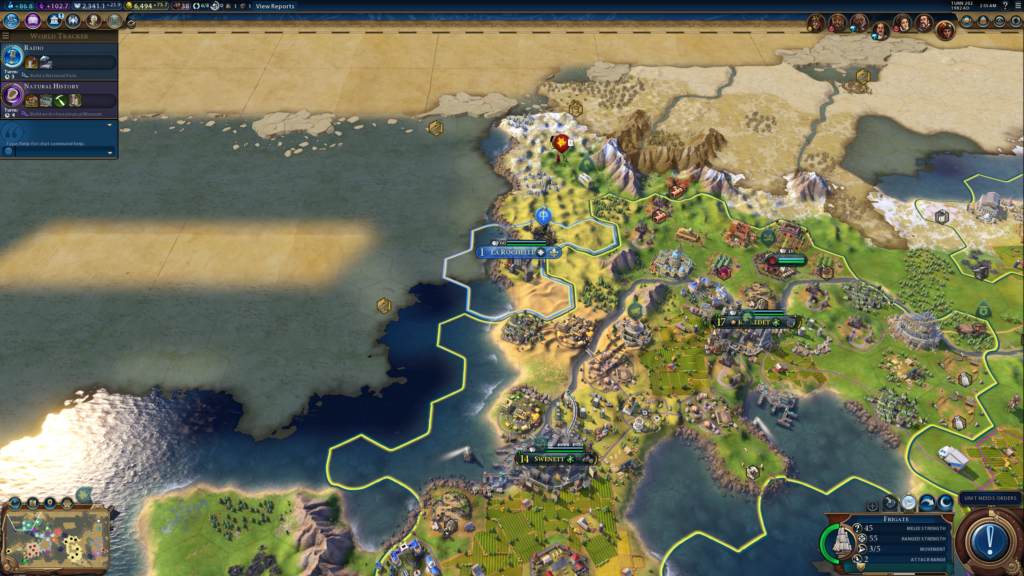 Despite the bugs associated with a freshly released game, I could not have enjoyed my experience more. Sid Meier’s: Civilization VI reminded me how much I love turn-based 4X strategy games. Each game is a dynamic story created by yourself and the players joining you that each have their own goals and agenda for achieving them.

This is without a doubt my favorite Civilization game to date, and with a fresh new look, epic soundtrack, revised gameplay and enhanced AI, you would be doing a great disservice to yourself by not picking it up ASAP.

Whether you’re a veteran of the genre or have never played a 4X game in your life, this game will give you a truly unique, fun and exciting experience that you won’t want to put down. Even if you’re not sure if you’d enjoy a 4X game, let me be the missionary to convert you to the amazing world of Sid Meier’s: Civilization VI.

I’ve been playing through another story as I write this and the only thing echoing through my mind this whole weekend has been, “Just… Just one more turn…”